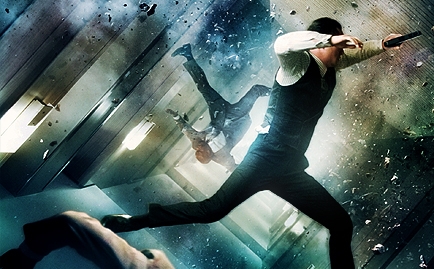 Leonardo DiCaprio exploded into worldwide fame as the star of James Cameron’s Titanic, which grossed nearly $700 million in America alone and was the highest-grossing film in history for more than a decade until Avatar knocked it off. But DiCaprio didn’t just settle into easy roles as a handsome heartthrob; rather, he has proven himself to be one of the most artistically inclined and critically acclaimed actors on the planet through a string of non-stop praiseworthy smashes including Catch Me If You Can, Gangs of New York and The Departed.

In his new film Inception, DiCaprio plays a man who is able to enter people’s dream states and extract valuable information from their subconscious. He recently sat down to talk about his new film, the experience of working with The Dark Knight director Christopher Nolan and his own personal dreams (the sleeping kind, that is).

You, as usual, gave a great performance in this film. What was your initial reaction to the script, since it was so unusual?

DiCaprio: There was an initial state of confusion for everyone that read the script. Chris Nolan is a visionary filmmaker, someone who comes up with very complex narratives and is able to pull them off. He’s got a great track record in doing that. But a lot of understanding what he wanted to accomplish cinematically meant sitting down with him in person, and I spent 2-and-a-half months with the guy, every other day. Trying to understand the rules of the dream world that he was creating, the possibilities of what was in that world and trying really to create a character with a real emotional backbone and who’s taking this therapeutic journey through the subconscious. I needed that one-on-one time to understand it.

Was there anything Nolan did to get you into the mindset of your character? Didn’t he play Pink Floyd’s The Wall for you guys?

DiCaprio: I think that’s something he did on his own time. Chris is very expressive in what he’s trying to accomplish, but it is insulated in his own mind. We knew we had to take a cinematic leap of faith, that this man was going to shoot something very special cinematically and we actually depended on that. This whole film’s success depends on the visuals. That made it easy to focus on our characters, because there was that trust that he would accomplish that. We needed to just show up and bring truth to our roles.

You’ve done so many amazing films, but this one you can’t really talk about. Was that hard, or because you didn’t really understand what’s going on anyway it was okay?

DiCaprio: I’d love to not talk about any of my movies. If I had the choice i would do that because I think so much of the experience being in the theater and watching it for the first time in the theater not knowing anything about a movie is lost when trailers give away so much of the plot points. But this trailer is confusing to audiences in the sense that it represents infinite possibility in this surreal world. But that’s a positive thing and audiences are going to flock to that experience. They want something special and unique.

There’s a lot of action in this movie as well as great character work. Was there a particular scene you loved to shoot?

DiCaprio: Without giving away the ending, there’s an interaction with Marion Cotillard’s character. She plays Moll, and she’s a manifestation of my nightmares, and it became this really sort of existential scene in that we had really bizarre talks with each other because she was a reflection of myself, a manifestation of my thoughts, yet she did live in the real world. She carried those attributes with her, and it became very surreal as to how to play those sequences, and I’ve never quite had that feeling on a set before or had those conversations with another actor.

This movie pushed actors to another level, especially your interactions with Ellen Page. How did you enjoy working with her?

DiCaprio: Ellen is a phenomenally talented young actress, and she has a way of saying her lines that makes you wholeheartedly believe what comes out of her mouth. It’s a real talent because what we do is make believe but she makes it real. She has real heart behind what she does. It’s an interesting relationship, she’s like my therapist pushing and probing me into a deeper understanding of what’s going on and I’m resisting that the whole time.

Are you a big dreamer? Do you wake up thinking “that dream could be a good movie!”?

DiCaprio: I’m not a big dreamer. I only remember segments of my dreams, or a feeling I had. But I am somebody that realizes when you wake up in the morning, there’s some thoughts and ideas that you don’t think about while busily doing your day-to-day life, that you suppress. You have to be aware of what you suppress because it comes to fruition in the dream world.

Between acting so much and your environmental activism, when do you find free time?

DiCaprio: I have a lot of time off. Doing these movies, you’re on different locations for 5 or 6 months, work as hard as you can and then you get a lot of time off. I’ve traveled a lot to places I haven’t been in the last six months, partly with doing work with environmental groups. So I get more time off than you think.

Learning to Be a Rookie