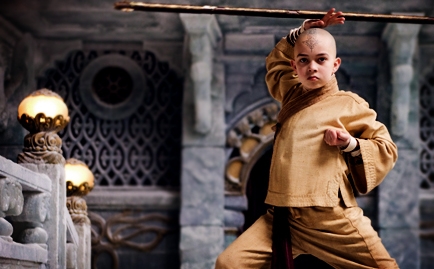 Filmmaker M. Night Shyamalan broke out in a big way in 1999 with his stunning, one-of-a-kind classic The Sixth Sense—a film that helped Bruce Willis up his career’s artistic standing while making new stars out of Haley Joel Osment and Toni Collette. The film explored the powerful emotions we feel when thinking of loved ones who have passed on—providing a touching answer to one of humankind’s most fundamental questions.

Shyamalan pulled off two more terrific films with 2000’s Unbreakable and 2002’s Signs, which explored what happens if a person becomes invincible and how faith is capable of saving us. But in the last five years, Shyamalan has appeared to stumble as he moved away from his dark and mysterious explorations of the human soul.

His newest film, The Last Airbender [Editor’s note: check back tomorrow for our review], unfortunately continues the string of disappointing films he began with The Village in 2004 and continued all the way to 2008’s The Happening (a film so boring I call it "The Nappening"). But fans of martial arts and splashy faux sci-fi worlds will find some enjoyment, while the rest of us film buffs keep praying for his creativity to soar once more.

Shyamalan: I’m a martial arts freak and have been dying to figure out a way to make a really different, significant martial arts film.

What was it like directing a movie based on someone else’s idea? You’ve never done that before.

Shyamalan: Up until now everything I’ve made is from my own ideas. Get in a room, close the door, write and create everything and make those movies. This was the first time I directed a movie whose idea was from someone else. I was lucky to write and direct the movie, and tweak the tale the way I can do it best. It was in that balance that I was looking for. I’ve been waiting for a project where the source material is great but I can be me completely in the subject and the execution of the project, and this is a marriage of the two.

The movie takes place in a whole different world of our own. Can you explain it to us?

Shyamalan: It’s a world where there are four nations, and each is in control over one element: fire, earth, water, air. They’ve been living in harmony and at the center of this is that in every generation there’s one individual who can master all the elements, and he’s called the avatar. He keeps the balance and he disappears. The world goes out of balance, and Fire nation invades all the other nations. And when this person returns, and he’s a child, the world has gone upside down and one of the nations has been wiped out, and the movie is about him trying to deal with the guilt of his absence and trying to fix this before it’s too late.

A lot of people have noticed that Noah Ringer, the kid you hired for the lead, bares a big resemblance to the comic-book character Aang.

Shyamalan: He was an amazing martial artist, and he was a dead ringer for this kid.

So what is “bending,” anyway? Sounds like an interesting concept.

There’s a lot of effects in this movie, but also a lot of gritty realism. How fun was it shooting under the harsh conditions needed to depict the film’s world?

Shyamalan: We started in Greenland, and it was the first time I shot a serious sequence of my films outside of Philadelphia. It’s something I was looking forward to and dreading at the same time: it’s 40-below, it’s dangerous and we don’t know what can happen. You can get a blizzard for two weeks.

You really [seem to] make kids think like real kids for once. And parents, I’m sure, are happy to see you make films they can relate to as well. What’s your philosophy for a great role?

Shyamalan: If this movie is meant to make you believe, and indoctrinate you that there’s magic in the world, and wake you up and make you think you’re a kid again, then that experience did that for us.

How We Can Help Haiti the Right Way