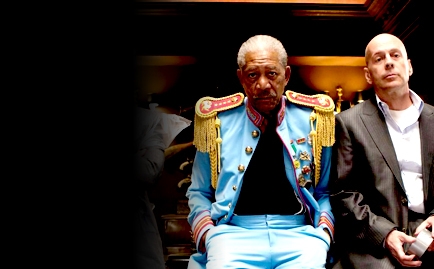 While Hollywood is usually built on youth and who’s got the hottest face and freshest personality, sometimes a movie comes along that reminds the world that experience counts and veteran movie stars can run circles around most of the young guns of today (Taylor Lautner, really?). The Expendables gave a second chance to Sylvester Stallone and seemingly dozens of other action icons of the 1980s, and proved to be a blockbuster with both the stars’ old fans and an impressed new generation.

Now, the new movie RED has come along to really show how old pros can still mesmerize audiences. In it, a flood of longtime stars—including Bruce Willis, Morgan Freeman, Helen Mirren, John Malkovich, Mary-Louise Parker, Richard Dreyfuss and Ernest Borgnine—team up to have what seems to be the most fun of their careers. You haven’t lived until you’ve seen Mirren—who normally defines prim and proper and who won an Oscar for playing England’s Queen Elizabeth—mowing down bad guys with a machine gun while wearing a dress and trading quips with Willis.

Best of all, the movie’s violence isn’t offensive, but rather played almost like a live-action Looney Tunes cartoon. And while most pumped-up action films have an excess of foul language, this film reins in the trash talk in favor of clever laugh lines.

Morgan Freeman and Bruce Willis recently sat down to discuss the film and the wildly fun times had while making it.

Morgan, what was the main attraction to jump in on RED?

Freeman: When you find work, you run with it. But the attraction for any script is, "Is it a good story, does it engage, who’s in it?" You’ve got Bruce Willis? That’s good enough, but who’s directing? Robert Schwentke and what’s he done—Flightplan? That’s good. Who else is in it? Oh wow. I’m in!

Making a movie is long days and hard work, but did you have a lot of downtime fun with this crew?

Freeman: Not downtime fun. I don’t know anyone who feels a need to leave a set and party with coworkers after working all day. And between takes you disappear.

This is your second time working with Bruce. Does it make it easier now, like working through a shorthand?

Freeman: It does and it adds a bit of depth to what you’re doing with that actor. Philip Seymour Hoffman at a People’s Choice Awards said, “Actors don’t compete, we watch each other’s back.” It’s our job to have each other’s back, and that makes it fun and easy. Let it all hang out and the people you’re working with won’t be looking the other way if you fall.

Did you realize RED would be so funny?

Bruce, what was it like being surrounded by so much name talent on this film?

Willis: It was really incredible to get all these actors to do it. It’s rare to work with actors you’re a fan of, and it’s a mutual admiration society. People are gonna talk about this film, and a big shining light of that is that every five or 10 minutes a new movie star shows up.

Mirren is really funny, always shows up on time and continually surprises. So it inspired me to try more things and bring more to the table myself. There were 14, 15 name actors in this, and you got your A game from every one of them. Actors can be a pain to work with because they’re always asking: “What if I did this? Why does my character do this?” But it’s only interesting to the actors, why would you want to talk about your work? It’s like dancing about architecture.

Do you ever think of taking on more responsibility for films behind the scenes?

Willis: I wouldn’t want to do it—to have the director’s or producer’s job—taking a movie for two and a half years, from idea to release and making sure it gets out there and has goodwill from the public and critics. A lot of work, but it’s interesting.

Do you ever think about what you’ll do when you retire?

Willis: It’s so hard to look ahead five years—easy to look back but really difficult to look ahead to what the future holds. Could be doing something else, but I still love doing this. My favorite part of acting is making something, not sitting and talking about it.