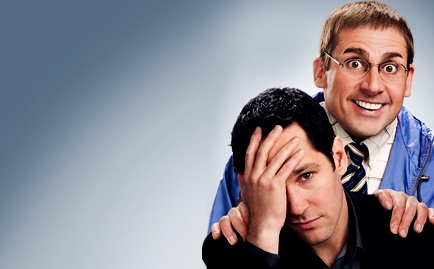 There’s a long tradition of comedic acting teams that give movie buffs double their pleasure and enjoyment, from Laurel and Hardy down through Abbott and Costello and on through Farley and Spade. Consider the dynamic duo of Steve Carell and Paul Rudd as the worthy heirs to that tradition, thanks to their new film, Dinner for Schmucks.

Rudd and Carell first worked together in the 2004 comedy classic Anchorman before reteaming in the blockbuster 2005 hit The 40-Year-Old Virgin. Yet as their career paths have continued to expand in the past five years, they’ve been working separately.

The new film comes at a time of change for Carell, as he heads into his seventh and final season in the Emmy-winning role of clueless boss Michael Scott on NBC’s hit sitcom The Office. He is hoping to return more to writing (he co-wrote 40-Year-Old Virgin with its director, Judd Apatow) as well as acting. Meanwhile Rudd is ready to start work on a new film of his own in just a few days.

What is the most challenging thing you had to do for this picture, Steve?

Rudd: That’s challenging for anyone!

Carell: And to lift him! He was giving me nothing.

Rudd: The only way to sell it is dead weight.

Carell: That was the biggest physical challenge.

Rudd: To try and sustain a performance is always a challenge. Anything you work on, to try and be real and show up and not look as if I’m playing pat to anything is always work.

Paul, talk about the challenges of playing the straight man in a situation like this where Steve has more obvious fun.

Rudd: It’s a challenge not to ruin a take by laughing. I didn’t rise to that on many occasions. My definitions of comedy, drama, and straight man are all blurry for me. I don’t think of it in those terms. The character I was playing had some horrible stuff happen to him, things he hoped would go a different way. It has to be reactive but not passive, and that’s tough to sustain over the course of a movie. It’s finding moments where you do lots of different things. As a whole, it’s a relationship but not so much in terms of jokes.

The casting of Jemaine Clement (HBO’s Flight of the Conchords) as an outrageous artist was amazing. What was it like working opposite him?

Carell: I never met him before and he’s fantastic, a really good improviser in the sense you never feel him going for a joke. You never sense him waiting for his turn to say something funny; he’s always part of a scene. He’s a really fine actor. He committed to that character so completely, and there’s a sense of calmness about him and a sense of inner dignity to that character in the face of its absurdity, which I just loved. He was a hard person to work with and not ruin takes.

Rudd: He’s so good with subtlety, though his looks are so defined. There were many moments he’d say something that wasn’t a joke, but he’d really make me laugh.

What was it about this story that made you sign on?

Carell: Working with Jay and Paul were enormous factors for me. I liked the story, it was weird and it had a heart to it. I tend to like things that have a gray area to them. The character Paul plays isn’t a bad guy, but he’s at a moral impasse in his life, and that’s a very intriguing story. It says something very kind, ultimately, and that’s what I responded to. I think it’s a very kind story and a great relationship between these characters.

Rudd: It was kind of a no-brainer; I was excited to get offered the part. I loved it—the script and the people.

Steve, congrats on your latest Emmy nomination. You’ll retire from The Office. Can you rehearse your Emmy speech?

Carell: This will be my seventh season and my contract expires. I wanted to honor my contract, and it’s a good time for me to move on and spend more time with my wife and kids.

Rudd: Steve will be joining the Miami Heat.

Paul, you’re in James L. Brooks’  (As Good As It Gets, Broadcast News) new film, Everything You Got. What’s your character?

Rudd: I play George, whose whole life is falling apart. I meet Reese Witherspoon on the worst day of each of our lives, and I fall in love. The feeling isn’t quite reciprocated by her. The idea is two people who meet on the worst day of their lives.

Steve, you mentioned spending more time with your wife and kids. Any plans for projects later this year or 2011?

Carell: I just completed a movie with Ryan Gosling and Julianne Moore that’s the first of my own production company, coming out next year. I hope to do more writing once my tenure at The Office is done.

Carell: He’s intensely funny and his brain works differently than most people and that’s what makes him great. He’s so specific in the choices he makes. He comes into a scene as a character and is committed to that, not just being funny in the moment. He was just really a joy.

How about the mice? What was it like working with the mice?

Carell: I was astounded by that. The man-hours and attention to detail and commitment to those dioramas, they were astounding. I think honestly, things like that really help you with a character; to sit in a room with all of those and see how meticulously they’ve been put together tells you a lot about this character and how meticulous he is. I do hope at some point to own one for my house. I don’t know whether it’s Ben Franklin or the Evel Knievel one, but I would love to have a mouse diorama in my home, displayed proudly.

What’s each of your favorite Jay Roach films?

Carell: Austin Powers is so funny, that’s what first attracted me to it.

Rudd: Jay has done so many funny movies, he’s just such a smart guy that I will often sing his praises. He has all this talent, yet [he’s] self-effacing. He’s amazing.

What special talent might get you into a dinner?

Carell: I play the baritone horn—which is like a mini tuba, and is the least sexy instrument you can choose and I generally say I don’t play one so I don’t have to acknowledge it. I also play fife.

Rudd: I can do this. [He rolls his tongue from the sides.] That’s all.

Floods Kill At Least 430 in Pakistan