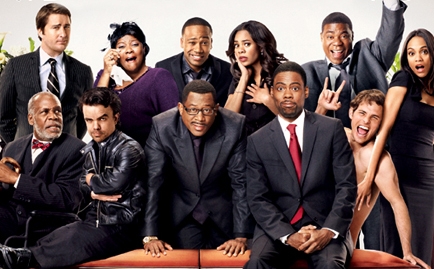 Despite being named “the funniest man in America” by such venerable magazines as Vanity Fair and Entertainment Weekly, Chris Rock has rarely been able to translate his amazing comic gifts to the movie screen. But in his new film Death at a Funeral, Rock wisely steps back into a deep ensemble cast that includes standout roles for everyone from Martin Lawrence and Tracy Morgan to Luke Wilson and James Marsden. And that’s not even counting Danny Glover in his best role since hanging up his guns with the Lethal Weapon series.

A remake of a 2007 British film that was an art house hit in the U.S., Funeral makes the film more accessible to American audiences by re-staging it in the time-honored comic tradition of black families in outrageous spiritual situations and wisely keeps the original film’s writer Dean Craig as the sole adapter. Bringing in veteran indie film director and provocative playwright Neil Labute (In the Company of Men, Lakeview Terrace) as director might seem an odd choice, but he keeps things spinning at a fast yet perfect pace throughout and also keeps all the disparate comedic styles honed into one great overall package.

This only took three years after the original hit screens to pull together and release. Did you think a remake would take longer to do? And why did you think it would suit the American palate by remaking it?

Chris Rock: I saw the original in a little art house theater with only 10 people in the audience. We’re laughing our [butts] off and I’m thinking, “This is a pop movie.” I thought the jokes would work in America. You watch a lot of movies out right now and we’re not doing a lot of one-guy comedy right now, but collaborations like The Hangover and Date Night offer tons of great parts and the pressure’s not just on me.

Is a remake less or more challenging than making a movie from scratch?

Chris Rock: I’ll say this—when you know a movie’s ending is great, it solves so many problems. A lot of my movies are remakes, so I know they end great.

Neil Labute: A bit of each. You want it to be your own, especially when everyone who’s seen it loved it. It’s not making it better, but making it your own.

Neil, how did you manage to make the different styles of these big stars mesh together so well?

Neil Labute: People have gifts in different areas. Some like Chris or Martin start in standup, or Tracy with improv and he’d riff things we couldn’t use in character, we’d say so and he’d get back on track. Working with video rather than film on this movie, we could keep restarting fast without having to redo hair all the time, they could keep giving ideas until they had nothing left. I think the atmosphere was a more creative one. People tended to stay on set, and we even put a green room on top of their trailers. People wanted to see how each other was working, because the costars on a film like this was their first and most important audience.

Chris, is there such a thing as black comedy?

Chris Rock: To me it’s all just comedy. There’s Richard Pryor, Eddie Murphy and Cosby, but I’m also descendant of Rodney Dangerfield and George Carlin. When I was a kid, Rodney wasn’t a funny white guy, just a funny guy.

This cast is mostly black but mixed. Was the film intended as a black movie?

Chris Rock: With me, Martin and Tracy—there’s not three other comedians out there white people would pay more to see. So it’s not a black movie, it’s an every person’s movie.

Luke, how does this compare to other comedies you’ve done?

Luke Wilson: I like big ensembles, Neil’s directing it and then there’s this unbelievable trio together. Years ago I was on an island in the Caribbean, and people went nuts yelling “Blue Streak!” because I’d worked with Martin on [the film Blue Streak]. So I thought if I work with all three of these guys—Martin, Chris and Tracy—I could go back and run for mayor there.

Tracy, do you prefer ensemble work or more leading-man or duo stuff, like the two male leads in Cop Out?

Tracy Morgan: Coming out of SNL, it’s bring who you are and bring the funny. It took Michael Jordan six years to win a championship ’cause he had to learn to play with Scottie and others.

Working with improv masters like Martin, Chris and Tracy, how much of the film was off the script?

Tracy Morgan: These are my champions right here. This was my dream team, like Jordan and Barkley. I might not start, I might not get every play, but I got my shirt, I played real ball! That was my inspiration from the gate, from the jump. I’m sharing space with these guys.

Coming Through the Dark Night of the Soul

Breaking Up … With a Church