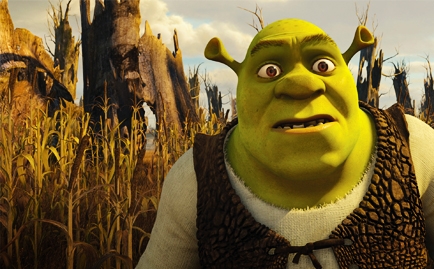 In 2001, DreamWorks released a little animated film called Shrek. And it was so well-received and a huge hit, that it not only made DreamWorks Animation a legitimate competitor to the Disney Empire, it also spawned three sequels, including today’s Shrek Forever After. As the actors sat down to talk about the new film at a recent press event, we were there to record their thoughts on the long-running series.

Looking back at all the years of the Shrek films, what’s been one of your favorite moments of the past 10 years?

Mike Myers: When Jeffrey [Katzenberg, one of the owners of DreamWorks Studios] said, "Would you like to be in an animated movie,” I said yes and he said it was called Shrek. I said, "That’s the worst title I’ve ever heard in my life." Then the first time I saw it with an audience and [with]  the line, “But you are beautiful to me,” I gasped from the response of the people who were so into the whole romance and the whole heart of it that I just was blown away that an animated movie could move people and that it was something that people would be invested in emotionally and I think that’s been the most satisfying thing for me.

Eddie, what’s been the secret to success for Shrek?

Eddie Murphy: The secret to success … I think it’s really funny and very well made.

Mike Myers: Hold on. I just went on for 15 minutes.

Eddie Murphy: I really do think it’s that simple. It’s really well made and it’s very funny and it’s smart and those things, you know, those things add up to a hit sometimes.

And Cameron, the emotion in this new Shrek film. It goes back to the roots of the beginning of it, doesn’t it?

Cameron Diaz: Yeah, I think that sense you get to see true love happen all over again for the first time between Shrek and Fiona because they get to find one another. It’s the moment that you’re talking about, your favorite moment from the first movie that you get to experience all over again because we get to take the journey with them of finding that love again. It’s not that, you know, you open up on the two of them sort of in routine of a life that they’ve taken for granted or Shrek has for sure and then you get to see him journey back through trying to regain and find his true love and that ultimately is a beautiful, lovely story and you get to fall in love with Shrek and Fiona all over again.

Fiona gets to be very empowered in this movie. She’s a leader and warrior. Did you think Fiona might have had a better life as this warrior without Shrek?

Mike, in the movie, Shrek doesn’t want the attention anymore, he wants to be able to do the things he used to enjoy without people watching. Is there a parallel in your own life?

Mike Myers: I do now live in a swamp. I like my privacy. I love being part of this and when I’m not doing stuff, I like to go away. I enjoy being a person a great deal.

Do you think being Canadian gives you a different sensibility at all about that stuff?

Mike Myers: Yeah, it’s hard to be super full of yourself in Canada. If there was a motto of Canada, it’d be "Who do you think you are, eh?" I think it’s very good training to just be a person growing up in Canada. People say a lot of things about Canada, you know, that it’s boring and stuff, but if you look around the world, I think, in praise of boring. I think it’s a very civilized place to grow up, and I’m very proud of it.

A lot of people hit the Shrek moment in this film of wondering what they’ve done with their lives and if they’re appreciated and what would happen if they tried a different path. What you would do with that?

Mike Myers: I feel, when I was a kid in Toronto, I wanted to, you know, you have your nose against the window looking south to show business, the United States. I kind of feel like every day I get to do what I do, what you were saying, definitely is kind of a dream day. So it’s kind of an amazing thing and honestly, I don’t think anybody here, I think we’re all kind of like unbelievably grateful and blown away at how well it’s gone, to be honest, this whole thing. We all like it and we all wanted it to do well and so this is a constant dream day.

TOMS and charity: water Team Up

Just What We Need