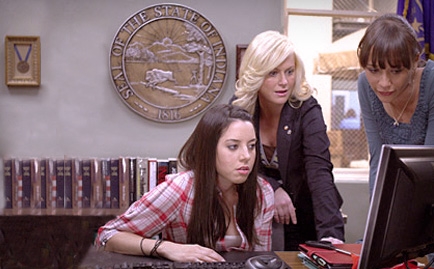 There’s something weird happening on television these days. And, no, I’m not talking about the after-hours activities on Bachelor Pad. You may not have noticed. You may have written off the entire medium after Real Housewives of Wherever was renewed for a fifth season. If that’s the case, I can’t say I necessarily blame you. But it’s there. Sandwiched between Big Brother 57, The Bad Girls Club and whatever it is that Simon Cowell is doing these days can be found some actual, honest-to-goodness edifying programming. And, no, I’m not talking about Extreme Makeover: Abdominals Edition. I’m talking about the mid-week comedy lineup that starts with ABC’s Modern Family and ends with NBC’s Thursday night lineup of Community, Parks and Recreation, The Office and 30 Rock. That’s right. As the fall television season kicks off this week, the most compelling storylines, the most dynamic casts and the most DVR-worthy moments will be found on the situation comedies of the 2nd and 3rd place networks.

This may seem an odd claim to make, but, in a world where The Daily Show has more credibility than MSNBC and where many prefer The Onion to The New York Times, maybe it’s not so strange after all. Levity is a powerful tool, and, when wielded skillfully, it can illuminate many topics too delicate for other venues. This is why you’re more likely to hear something insightful at midnight on Comedy Central than at noon on C-SPAN.

And this is why Modern Family puts more lumps in my throat than Oprah ever has.

Before we say anything else about these shows, let’s first establish one thing: they’re funny. This may seem an elementary place to start, but it’s important. These are comedies. Whatever else they’re trying to do, they were created to make people laugh, and it is only because they are succeeding in their primary purpose that it’s worth our time to think about how and why they’re funny. The writing is superb, the delivery is spot-on, the concepts are hilarious. (A government director who is militantly anti-government? Hilarious!) The jokes run the gamut from slapstick to subtle satire and they come so rapid-fire that I’ll sometimes have to watch an episode twice to make sure I haven’t missed anything.

So yes, the shows are definitely funny, but it doesn’t end there. For example, The Office hasn’t succeeded simply because it’s funnier than its contemporaries. It has succeeded because it’s a different kind of funny. It’s the same difference critics noticed six years ago when Judd Apatow started making movies. Knocked Up and Superbad didn’t land on every year-end Top 10 list because they told better boob jokes than the American Pie films. They landed there because they had something that previous R-rated, teenage comedies lacked. They had substance. They had something to say. They had, for lack of a better term, heart.

Watch 10 minutes of Modern Family and you’ll see what I’m talking about. The mainstays of a sitcom family are all there. You’ve got the clueless husband (Phil), the exasperated wife (Claire), the emotionally distant father (Jay), the mouthy teenager (Hayley), the precocious adolescent (Manny), but listen to what they’re talking about and you’ll start hearing things that sound out of place. They’re asking questions like, “Are you and mom getting a divorce?” They’re saying things like, “When you disregard my opinion, it makes me feel like I don’t matter.” They’re trespassing into territory typically reserved for Lifetime movies and Dr. Phil specials, and, in so doing, are showing us we can and should demand more from our sitcoms. And they’re being rewarded for it; just look at the list of winners from this past week’s Emmy Awards, which some were jokingly referring to as “the Modern Family Awards.”

Sitcoms have always found humor in life’s big questions. (i.e. Where should I work? What am I doing with my 20s? Will I get laid?) These are important questions, no doubt, but Modern Family and the others are not satisfied with banter about job interviews and first dates. They move past the “who, what, and wheres” of life and dig into the emotions that underlie them: “Does my life have meaning?” “Am I normal?” “Does anyone truly care about me?” When you’re on a show like Community, holidays aren’t just an excuse to venture into claymation, but to bring up serious questions about religion and family history.

The shows’ writers can get away with “getting real” like this because they have something most sitcoms lack: fully developed characters. Don’t get me wrong, I love George Costanza. I think he’s hilarious. But there’s nothing to him. He’s all antics and no emotion. This is not the case with the staff of the Pawnee, Ind., Parks and Recreation Department. Every one of them is an emotionally complex, socially believable, deeply flawed individual. In short: every one of them is human. Not only does this make them funnier, it makes them more relatable.  I know nothing about small-town city halls and even less about Indiana, but every person on Parks and Recreation reminds me of someone I know. Well, maybe not Rob Lowe’s character, but nine out of 10 isn’t so bad.

With their high emotional IQ, their three-dimensional characters and their seamless integration of jokes and drama, shows like Modern Family, Community and Parks and Recreation have become some of the rarest creatures in the entertainment jungle: comedies that can teach you something. Even more impressive is the way they get their points across without breaking character. You’ll find none of the “what did we learn today” voiceovers employed by Scrubs and My Name Is Earl. They just hit you in the gut with some piercing insight about, for example, the true nature of friendship, and move right on to the next punchline. Somehow, by refusing to dwell on the truth behind the jokes, that truth gets driven home even more poignantly.

Strangely, or perhaps predictably (see: Arrested Development), Modern Family is the only one of these shows with ratings as positive as its reviews. Community and Parks and Recreation are mired by poor viewership, and there’s no telling how much longer they’ll last. Prime-time slots are hot commodities, and I’m sure there are dozens of deviant-based dating shows clamoring for airtime  I fear it’s only a matter of time before Joel McHale and Co. are ditched in favor of more titillating fare—just one more reason to tune in to the premiere of their third season this evening.

So do yourself a favor and watch while you still have the chance. I won’t guarantee you’ll love these shows as much as I do, but I will guarantee they’re more worthy of 30 minutes of your life than just about everything else this side of The Nightly News. It’s not often a show can be funny but not filthy, serious but not sanctimonious. These shows have figured it out. If you’re thinking about giving TV another shot, this is the place to start.

Your Attic Is in the Basement?

One-Third of All Digital Photos Ends Up on Facebook