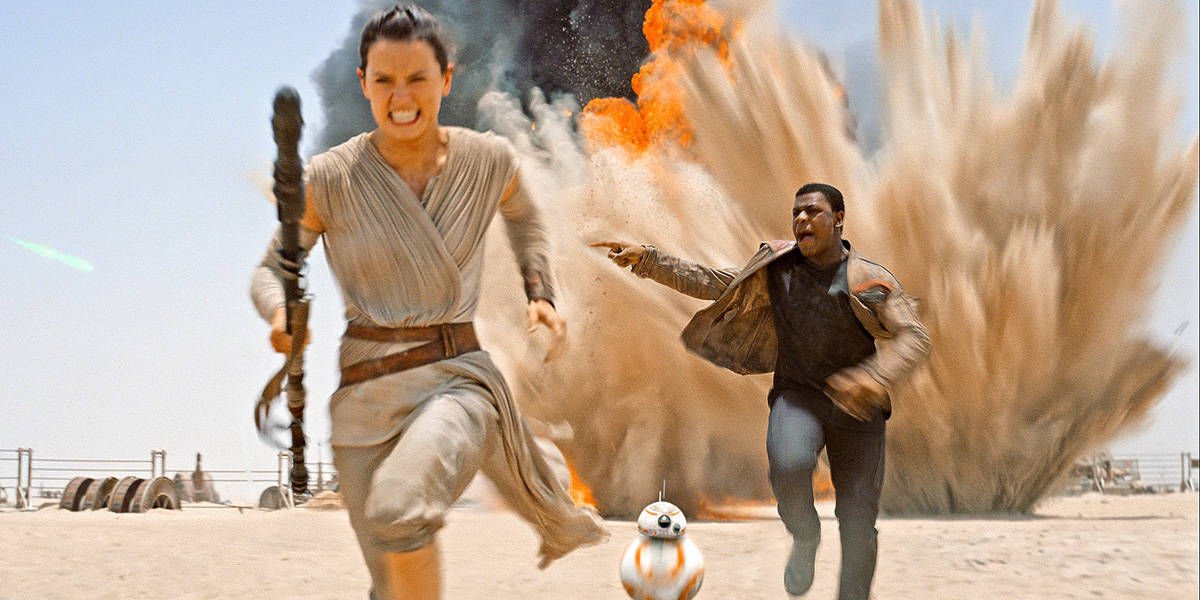 Let’s dispense with the most important part of the review and put everyone’s fears to rest: Yes, The Force Awakens is good.

There was reason to be skeptical. It was 15 years ago that The Phantom Menace proved no franchise is invincible, but it’s been a pretty instructive 15 years for Hollywood. In that time, blockbusters like The Dark Knight and Lord of the Rings have proved that the modern blockbuster is growing up. They did this largely by returning to what made some of the earliest blockbusters such treats: compelling characters thrown into unforgettable adventures. Simply put, they were returning to the Star Wars way of doing things.

Few people are more in love with the Star Wars way of doing things than J.J. Abrams, who has fashioned an entire career out of crafting old-fashioned crowd pleasers. Abrams is a student of the old masters. His most obvious teacher is Spielberg, of course, but really, he seems driven by wonder. If those were the only talents he could bring to rejuvenating moviedom’s most valuable franchise, it’d be enough, but Abrams also has the good sense to listen to people who love Star Wars. The Force Awakens may have been inspired by the original trilogy and informed by the mistakes of the prequels, but its clearest influence is the fans.

And so Abrams sets about crafting a film that is, in every way, true to the spirit of what made the original trilogy such a delight. It’s a hero’s journey with a sparse, understated first act that gently unspools into grand, galaxy-spanning operatics. The spaceships and costumes are all real, physical items, crusted over with that familiar grime and grit. All the old beats are here, and so are the complex family dynamics, the Western and samurai influences, a motley bar crowd, a destructive space station, eye-popping dogfights and “I’ve got a bad feeling about this.” In truth, there are times when the film feels less like an addition to the franchise than it does a remake of the original movie. A less forgiving analysis might call this playing safe, but I just call it playing. There’s a palpable sense of joy to the proceedings, and everyone from the scriptwriters to the actors themselves clearly have great fun at being given such hallowed toys. Their playful spirit is infectious. It’s impossible to not smile along.

This review will not get overly caught up on plot, since everyone’s avoiding spoilers like the Dark Side these days, so we’ll keep this simple. The film opens by introducing a few new characters. BB-8, that new droid your little cousin is getting for Christmas. Poe Dameron, a good guy fighter pilot given a familiar scruffy-lookin’, nerf-herding swagger by Inside Llewyn Davis‘ Oscar Isaac. Finn (Attack the Block‘s John Boyega), an appealingly out-of-his element rogue with shifting alliances. And, perhaps most importantly, Rey. Rey is an ace pilot who spends her days dreaming of a bigger life outside of her lame, barren desert planet. If that character sounds familiar to you then, well, you’re starting to see how The Force Awakens operates. She’s portrayed by Daisy Ridley, a newcomer who takes to the screen with rare ease. Making the jump from Star Wars to other projects hasn’t been easy for any actor, but Ridley certainly has the talent.

We’re also introduced to Kylo Ren, a merciless Darth Vader fanboy who’s committed to resurrecting the ways of the Dark Side. Adam Driver (Girls) does fantastic work in making his creation a much different sort of Sith Lord than we’re used to from this franchise. While James Earl Jones’ Vader was regal and foreboding, Driver’s Kylo Ren is violently temperamental—even conflicted. In an era in which far too many movies refuse to give their bad guys any serious personalities beyond some sort of bland love of global domination/destruction, Abrams’ decision to make Kylo Ren such a volatile force is one of his sharpest.

To examine what The Force Awakens gets right, it’s helpful to return to what worked so well about Episode IV, A New Hope. Although it’s famous for being the seed of one of pop culture’s most fully realized fictional worlds, the film itself is remarkable for its economy.

Outside of the iconic opening crawl, Star Wars wastes very little time explaining what’s going on, which is pretty remarkable when you consider that it’s a tale of political upheaval with an undercurrent of Eastern mysticism. Take the characterization of Princess Leia. A lesser film would have opened by loading her with backstory about her royal heritage, her home planet and her ties to the Rebel Alliance (in fact, the lesser prequels committed just such errors with their own characters.) But A New Hope avoided such laziness. She’s introduced as a plucky heroine on the run. She has some rapport with Darth Vader, so we can tell that she’s (a) brave, (b) important and (c) in trouble. We never learn much about her history, save for a few significant bombshells down the road, yet she feels a good deal more dimensional than about 95% of characters in film history.

Abrams employs similar tricks to streamline his own introductions. Rey, Finn, Poe and Kylo Ren are all such thrilling, fully realized characters that we don’t need to surround them with mountains of exposition. We’ve scarcely been introduced to them before we’re off on our first big action scene, set to John Williams’ score, which is basically another character at this point. By seeing them in action, riffing with each other and figuring out how in the heck you even use a lightsaber, they become as real as Luke, Leia and the rest in no time.

There are plenty of new names—like Gwendoline Christie’s Captain Phasma and Lupita Nyong’o’s Maz Kanata—who don’t get fleshed out as much, but half the fun of Star Wars has always been the deeply detailed narratives such side characters acquire over time.

Opening up with this fresh blood instead of the relatively easy fan service of classic characters was a gamble, but it’s one of the few things that sets The Force Awakens apart from the trilogy that spawned it, and the movie is stronger for it. We learn about them by watching them in action and make no mistake, the action scenes are among the best you could hope to find in a Star Wars movie. An early chase between a few TIE Fighters an iconic Corellian light freighter might just be the most thrilling action set-piece this franchise has ever produced.

Of course, when familiar faces do start showing up, it’s a blast. It’s hardly a spoiler to say that the most notable presence here is Harrison Ford’s Han Solo, flanked by Peter Mayhew back in the old Chewbacca outfit. Ford eases into his old role like he never stopped, cracking wise, talking his way out of trouble and shooting first. He’s still got the same louche tendencies, but he’s a little more weary, a little more experienced, and a lot more inclined to give orders than to thumb his nose at whoever’s giving them. It’s terrific fun.

The whole movie is terrific fun. The whole movie is, for many of us, why we started watching movies in the first place. To be transported. To see something of ourselves in these ordinary characters called to do extraordinary things. Because, at their core, the Star Wars movies are really about what it means to be a good person during difficult times.

The Force Awakens confirms that blowing up two Death Stars doesn’t necessarily mean good times are here to stay, which is why a whole new generation is going to have to look to Luke, Leia and Han to learn how to be heroes in their own time—learning from them, and applying their wisdom to a modern era. It works for them. It worked for Abrams too. Welcome back, Star Wars. This galaxy missed you.