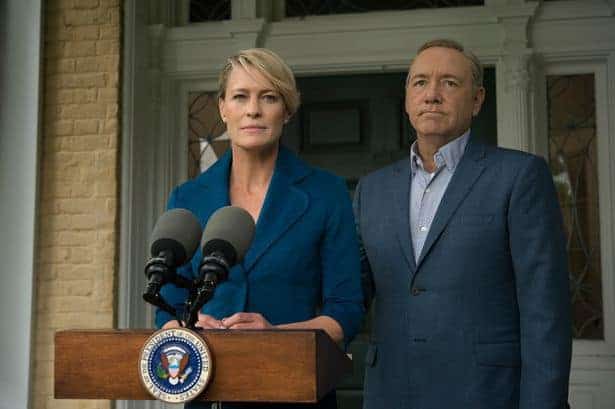 In a candid, wide-ranging interview with Today, House of Cards star Robin Wright was asked about the sexual abuse charges made against Kevin Spacey over the past year. Wright plays Claire Underwood, wife to Frank Underwood, on the Netflix drama. Spacey was fired from the show following the allegations.

“I think we were all surprised, of course, and ultimately saddened,” Wright said in the interview. “We forged ahead and we were so thankful that we were able to complete the series as planned.”

On Spacey in particular, Wright spoke at greater length, but was diplomatic and measured in her response:

We were coworkers really. We never socialized outside of work. He was never disrespectful to me. That’s my personal experience. That’s the only thing I feel that I have the right to talk about. Kevin and I knew each other between action and cut and in between setups where we would giggle. I didn’t really—I didn’t know the man. I knew the incredible craftsman that he is.

Wright was asked if she has ever faced sexual harassment in Hollywood. The actor replied, “Who hasn’t.”

Hear Me Out: ‘Pirates of the Caribbean’ Is an Allegory for American Democracy