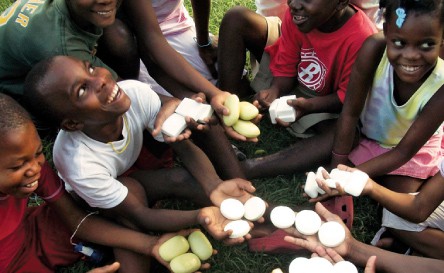 In the week following the earthquake that devastated Haiti, while nonprofits across the world scrambled to assemble funds, medical supplies and personnel, the team at Clean the World was busy packaging recycled soap.

The nonprofit organization collects soap from hotels that would normally be thrown away, then sanitizes and recycles the soap to be distributed to places in need.

Co-founder and Executive Director Shawn Seipler came up with the idea while traveling. “I was starting to wonder what happened with the soap and the bottled amenities when I was done with them,” Seipler says.

So he and co-founder Paul Till began to ask. “We contacted about 30 hotels between Houston and Orlando and realized those items were being thrown away,” Seipler says. “From there we went down the road of, ‘Is there a way to recycle soap?’ ”

It turns out there is. More than 1 million bars of soap are thrown away every day in the United States. What the partners needed next was a process for cleaning and recycling that soap.

After an initial time-consuming process, they began “cooking” large quantities of soap bars in an industrial restaurant food steamer. They then partnered with Tri-Tech Laboratories, asking them to infect the soap with certain skin-to-skin pathogens like E.coli and salmonella.

“They did that with the soap and then we ran it through the steaming process,” Seipler says. “With the bar of soap sitting in the steamer for less than five minutes, it completely eliminated all of those pathogens. When we went to that second process, we went from doing 500 bars a day to 10,000 bars a day.”

This quantity of soap allowed them to go from backyard to international, and now they have an industrial soap press that allows them to create 40,000 bars each day.

Though soap might seem like a strange way to combat global need, certain statistics illustrate how it can help. For one, pneumonia and diarrheal disease account for more than 9,000 child deaths every day, and the use of bar soap could reduce the mortality rate by up to 60 percent.

Since its inception in 2009, Clean the World has worked to collect and distribute more than 8 million pounds of recycled soap to countries worldwide. Through their on-the-ground distribution and close partnerships with organizations like Harvest Time International, Floating Dock, World Vision and Feed the Children, people across the world have received aid, in addition to countless domestic and Canadian shelters. Their corporate partners include Caesars Palace, Walt Disney World Resorts, Sheraton and Westin.

Also, every month, students, church groups, Boy Scouts and Girl Scout troops across the country conduct soap drives, collecting partially used soap and sending it to one of Clean the World’s recycling centers. The nonprofit currently operates four facilities between the U.S. and Canada, and is planning a fifth in the upcoming year.

“There’s almost a thirst out there for socially responsible green programs that make sense, that do the right thing, that are easy to implement, because properties want to do the right thing and then want to be able to tell their guests about it,” Seipler says. “Right now consumers are pushing hotels to initiate sustainable programs. You have a big hotel where they’ve got 500 rooms and you’ve got 500 people staying in it—or more than that—at any one time, and the consumers really want to make sure we are being socially conscious, being environmentally conscious, and our program does that.”

Documenting the Decline of Girls in India