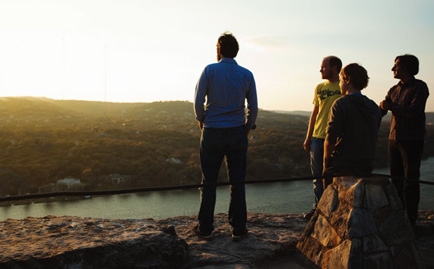 Having spent their entire adult existence together, Explosions in the Sky has seen their fair share of trends come and go. Still, from day one, the Austin, Tx.-based quartet has held fast to their sprawling brand of instrumental rock. While their sound shares common threads with the spiritual overtones of Sigur Ros, with amps turned up to an ear-shattering Mogwai 11, Explosions in the Sky are rockers—albeit with longer song structures and loftier ambitions than the average guitar slingers. (Read RELEVANT’s coverage of the band’s recent performance at Lollapalooza 2011.)

Now entering their second decade as a band, and third in life, the band—which includes Mark Smith (guitar), Chris Hrasky (drums), Munaf Rayani (guitar), Michael James (guitar/bass)—has moved past their basketball-playing, cash register-jockeying younger years, settling into their 30s with the advent of marriages, children and other adult responsibilities.

However, James maintains that the more their worlds expand, the more their dynamic as a band stays the same. “We each have our own places—no fraternity parties, no beer bongs at our houses to be found at all.” he jokes. “Having grown up over the last decade with each other, we still maintain a very tight-knit friendship between the four of us while also being able to grow into our adult lives. We’ve got the best of both worlds in that. We’re all still best friends. We see each other almost every single day; we’re a very important part of each other’s lives. We’ve just been able to merge those things together in what seems like a perfect and unique way.”

The secret to maintaining fraternal peace? “We’ve learned how to fight over the years. We still fight and argue and everyone tries to impose their will and get their way. But we’ve learned how to do it in a pretty constructive and even a friendly manner.”

If this sounds like a marriage, that might be the perfect analogy. James laughs at the idea the band could offer counseling to disconnected couples, apologizing for their story’s lack of drama. “Absolutely it’s like a marriage. I’ll say I don’t have any secrets. I don’t know if the other guys do. Not that I know. We’ve gotten to the point where were incredibly open with each other about almost everything in our lives. We’re very much like brothers.”

It’s that familial agreement that allows Explosions in the Sky to operate as a leaderless unit—fostering a sense of near Gilligan’s Island-levels of cooperation, where all decisions are made through a unanimous vote.

“It’s something we’ve had to learn over the years,” James says. "Being in a leaderless sort of situation is great because it’s exactly what we want, but at the same time it can be very frustrating with four very different opinions on any subject that you can imagine. It can be really hard to reach a concrescence—which is probably the most difficult thing about being in this band. But at the same time it’s the thing I find most rewarding as well. Once we do all get on the same page, everybody’s happy; everybody gets exactly what they want. The process can be difficult, but the end result is more than worth it.”

The end result of their friendships and collaboration can be termed without irony as beautiful music. Over the past five albums, Explosions in the Sky has created swooping, dizzyingly sprawling instrumental compositions that seemingly cradle the listeners in one moment, and rocket them skyward the next. An album (clocking in at around six songs in about an hour) is structured to move the listener through a series of emotional twists and turns on par with an epic film—which is exactly what James would like the audience to imagine.

"A lot of the times when we write music—our music being instrumental—we can’t tell a very specific story with words,” he says. "So when we write music, a lot of the times it’s done with our own stories in mind. We’ll have very specific images and almost story lines that go along with it. It’s very much written to a movie in our heads. The movie doesn’t exist anywhere except there, and I think that’s the case for a lot of people listening to it as well. It can bring about images for them. I think ‘cinematic’ is a great description.”

Much like a cinematic classic unfolding in front of rapt viewers, the band doesn’t see emotions as compartmentalized, instead allowing the comedy and tragedy of their art to merge.

"Particular songs of course evoke particular feelings,” James says. "A song that’s sad but doesn’t mire you down on a very dark, melodramatic chord, [and] a little sadness that also offers some sweetness; those are typically my favorite sorts of combinations. Sometimes that’s not what the song calls for. Sometimes it calls for a very bombastic, direct emotion. Something very triumphant or something very dark and sad, that’s what’s going to work for a particular song. We don’t want to be just one type of band—an upbeat band or a melodramatic band. Everybody experiences the range of emotion you can imagine. That’s what we want to try to incorporate into music. You want to touch people with songs, that’s what we strive to do.”

As any music fan will surely attest, the idea of being touched feels too surface-level when compared to the extreme emotions evoked by a favorite band’s work. It’s almost—dare it be said—a spiritual experience. Despite not staking any claims of faith themselves, Explosions in the Sky doesn’t balk at the comparison.

"I like that description, actually,” James says. "To me, our music, I think it does have a pretty emotional component to it. Music in general, not just our music, has definitely touched me in ways that are kind of hard to describe, that goes beyond a traditional emotional pull. think when people describe our music as spiritual, I feel like that’s what they’re getting at. There’s something intangible, something beyond the regular feelings we have that can be touched by that. So I think that’s a great description. I understand what they mean when they say it.”

While unable to speak on the specifics of his band mates’ beliefs, James is open about the inner workings of his moral compass. "As Shakespeare would say, ‘Nothing is good or bad, but thinking makes it so,’" he says. "I personally have—and I think we all have—a sort of moral code that we live by so we can all get along with each other. Societies form those sorts of things, and I believe they’re good.”

And what of those that form society? ”I’m of the mind that everybody had the capability of amazing-good and awful-bad within them,” James continues. "A lot of what makes a person good or bad is your choices, what you choose to do. A lot of it comes from your environment and how you’re raised, the people you’re around. It’s kind of a gray area, I guess. But I don’t think people are born good or bad. I think we have the capacity for amazing amounts of both.”

This idea of the duality of human nature is played out in "Human Qualities,” a cut from Explosions’ sixth studio album, Take Care, Take Care, Take Care. As described by James, the track celebrates the flaws that sit alongside a person’s greatest strengths.

"These little imperfections and our strange little ways and thoughts and beliefs, but that’s what we feel like is great about humans,” he explains. "Were not perfect. We each have our own idiosyncrasies that are uniquely ours. I think that’s kind of beautiful. That’s what’s to love about people, our flaws.”

Read this entire article in the July/August 2011 issue of RELEVANT magazine.

The Fear of Fasting

Snake Charming On the Decline