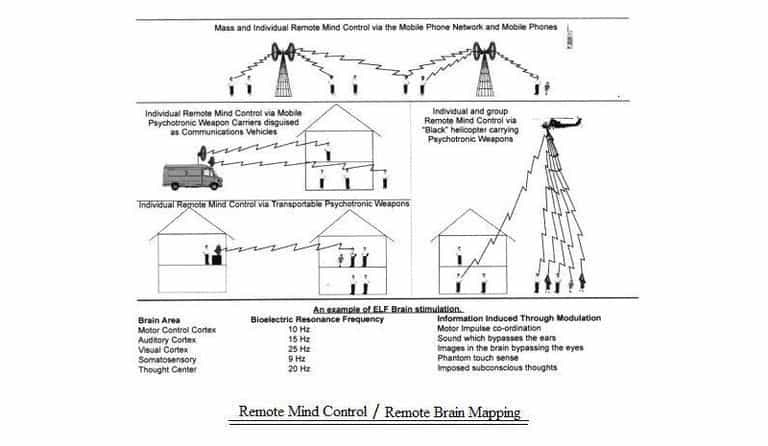 One journalist who filed a pretty standard Freedom of Information Act for government records on national white supremacist groups seems to have gotten way, way more than he bargained for when a Department for Homeland Security-linked agency sent him a file titled, and we quote, “EM effects on human body.zip.”

Unzipping that file was probably the easiest decision ever made by humankind, and the results delivered on the bonkersness of the title. Somehow or other, someone in charge of responding to FOIA requests accidentally mailed an attachment about some too-wild-to-be-believed “psycho-electronic weapon effects.” These “Remote Mind Control” weapons, according to the diagrams in the file, are capable of everything from “forced memory blanking” to “sudden violent itching inside eyelids” to “wild flailing” followed by “rigor mortis.” And the less said about a remotely induced “forced orgasm” the better.

Popular Mechanics says that at least some of the files appear to be from a 1996 article from an Australian magazine called Nexus that documents unexplained phenomena, conspiracy theories and other X-Files-y things. Just how this file was sent out as part of a Freedom of Information request isn’t clear at all and there’s nothing in the files to suggest that this is actually part of an official government program. At least, that’s what they want you to think.

Letitia Wright on John Boyega: ‘The Holy Spirit Is Strong With This One’

A Startup Is Under Fire for Using A.I. to Offer Therapy

Could Quitting Social Media Be a Mistake?

The Backlash Against ChatGPT Has Begun