Back in December, a PR executive sent an offensive tweet before hopping on a trans-atlantic flight.

Along with her reputation, she’d also lost her job.

Now, it was a very offensive tweet—but the incident served as a good example of the way social media can stir up big groups of people. Somehow, thousands of people read and reacted to that tweet—thousands of people who didn’t know anything about the tweeter other than her name and the content of that one tweet.

The advent of Facebook, Twitter and the blogosphere has created new ways of conveying information that can reach millions of people within seconds. Not only can this information be beamed directly to people, but it can mobilize large groups into action, effectively creating virtual mobs.

This phenomenon can have positive effects. It can enact real change, like the overthrow of a repressive regime or, less radically, a change in a harmful company policy. But sometimes they are misguided, unhelpful or even based on faulty information, like when a large number of folks on Reddit worked to find the Boston marathon bomber, but turned out to be mistaken.

The Internet is the gateway to spark a movement, and there are people with many different agendas who know this. However, often it’s not a conspiracy of mass-media or a certain group, but rather just people following where the crowd starts to go.

There are plenty of things that are worth getting angry about. We certainly should seek justice and feel free to express opinions. However, before we jump on the bandwagon of criticism or outrage, we should weigh whether it’s worth engaging.

To stir up controversy or get likes or retweets?

Are we offering any solutions, helpful takeaways or ways to move forward?

We also need to make sure we’ve gotten our facts straight. On many social media sites, there have been instances in which certain people were hounded with death threats by droves of angry individuals who based their facts on a single person’s writings online. In many cases, an Internet mob arises to lynch the reputation of the targeted individual, only to later find out that the story isn’t as clear as they’d assumed.

During the Zimmerman trial last summer, Spike Lee retweeted an address for George Zimmerman, who was then under trial for the killing of Trayvon Martin.

But the address was wrong, and an unsuspecting elderly couple began receiving death threats. They’re now suing Lee for the error.

We need to be very careful in this day and age. The Internet is a great tool and has many wonderful facts, but it’s overwhelmingly apparent that most information on the Internet must be taken with a grain of salt (including this article).

What the Internet has really done is muddy the waters of where our trusted information comes from. We can pick and choose these sources based on our preferences and what we want to hear. We can create our own echo-chamber, allowing us to read blogs or news sites that only agree with our opinion. We can follow people on Twitter whom we only like or agree with. We can even filter our friends by whose interests and opinions we value most.

The end result of this filtering is a lopsided view of truth, where instant information that makes us emotionally charged is only further validated by the other sources we’re filtering. This can cause us to be less discerning about how we then receive counter-information. When the other side finally reaches through the noise to bring balance, much damage may have already been done to someone’s reputation or livelihood.

We as Christians should do our very best to think through situations before engaging. We shouldn’t just follow the mob, even if it’s a mob of Christians.

Remember the crowd that greeted a donkey-riding Jesus into Jerusalem with palm leaves, singing “Hosanna”? Many in that same crowd would be crying “Crucify him” just five days later as He stood before Pontius Pilate.

How do we tell when we’re drifting into the mob mentality? We must first look at our own thought process and ask if we have even considered we might be wrong at any point in time. Secondly, we must be patient and wait sometimes.

There will be times when immediate action is an urgent necessity, but there may be other times when you come across a fervor on Facebook or Twitter and you need to take a step back. Before picking up your virtual torch and pitchfork, do some further searching on different sources, learn as much as you can from varying news sources with different bents. Then, try waiting.

Proverbs 5:18 says, “A hot-tempered person stirs up conflict, but the one who is patient calms a quarrel.”

Don’t be in a rush to take sides, but always be humble enough to know there may not be a “good side” in many situations. Your attempt to seek wisdom will honor God rather than the mobbing masses. 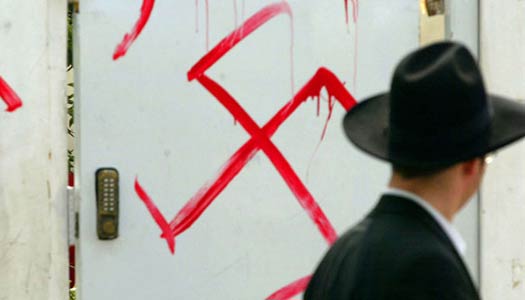 Anti-Semitism on the Decline in the US