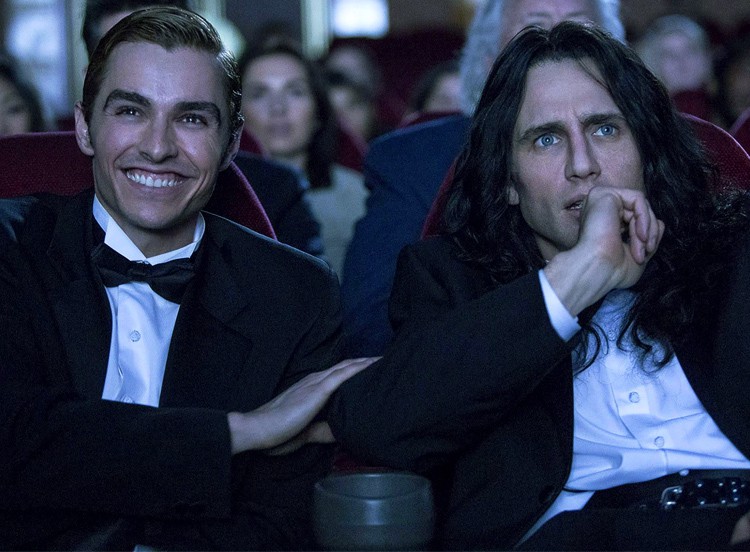 The worldview of The Disaster Artist can be found in its name. The film is about how worthwhile art can be found in failure—that the mere audacity of self-expression can inspire millions of people, even if it’s for reasons you didn’t expect or intend.

A reel of well-known actors and Hollywood celebrities appear in the opening scenes, describing a cult classic called The Room as if they’re describing a miraculous contribution to filmmaking.

But in reality, The Room is often hailed as the “best worst movie” of all time since releasing in 2003. Despite being a complete disaster in its editing, dialogue, acting, continuity, lighting, timing, production quality, pacing, pathos—basically all quantifiable trappings of cinema—the film elicits a powerful reaction.

For many, those reactions are combination of hilarity and bewilderment. The entertainment value of The Room lies in the enigma of its very existence, provoking you to ask how the film could have possibly been made, while also laughing and falling in love with various quotable moments that reward repeated viewings.

The Disaster Artist sets out to explain some of the mystery behind the enigmatic Tommy Wiseau’s misguided passion project, which he funded himself at the alleged expense of $6 million (though the true number could be much higher). James Franco directs and stars as the self-unaware Tommy, playing him just about perfectly when compared side by side to scenes from The Room (which this new movie does for a few minutes during the end credits).

The result is a hysterical movie that also aims to be affectionate, heartwarming and inspiring. The Disaster Artist feels like an excuse to laugh at the personality and foolishness of Tommy Wiseau in brand-new ways, but it also humanizes him, establishing a strong central story about a lopsided and perplexing friendship between Tommy and his longtime best friend and filmmaking partner Greg Sestero (played by Franco’s real-life brother, Dave Franco).

The movie is packed with too many funny cameos to list succinctly, and the truth is that very few of them matter outside of the dynamic between Tommy and Greg, a tense relationship of give and take between two amateur actors who both want to make it in Hollywood. When Hollywood rejects them, they take matters into their own hands.

The audience is expected to see Tommy the same way Greg does. Despite all his eccentricities, Greg both admires and looks out for Tommy, wishing the best for his dream and relishing in getting it done, no matter what people may think. I found myself fascinated by the way Greg handles and defends their increasingly complex friendship, as it’s one that can simultaneously make you feel guilty for laughing at the real-life Tommy’s mannerisms, accent and awkward behavior.

Many will say that The Disaster Artist is more about empathizing with Tommy’s dream rather than mocking him. I disagree. The movie is clearly doing both, and this is complicated by how Tommy himself purports to be in on the joke. He’s continued working with Greg over the years, using the cult status of The Room to his benefit and pretending he meant for his movie to be a comedy all along.

And it should be pointed out that the movie is based on a memoir of the same name that Greg himself co-wrote, which is why the movie is smartly told from his point of view. Greg is clearly the audience surrogate, in that we see Tommy through his eyes, which means it can be easy to feel like we’re not laughing at Tommy’s expense because Greg never does.

For that reason, the movie often shifts to a different message about how important it is to get over your stage fright and make something for the world. You never know, it could end up being a spectacular failure worthy of a standing ovation. But there’s an underlying weirdness to the very conceit of watching a movie about the making of a movie that gives people permission to mock a man they’ve never met.

To its credit, The Disaster Artist does come across as a film trying to overcome that gray area by at least telling Tommy’s story in a way that doesn’t look down on him. Which is why for many viewers, this is a movie that resembles a celebration of what makes us different, rather than a mean-spirited sideshow.

Why Are Some People Able to ‘Hear’ This Silent Animated GIF?