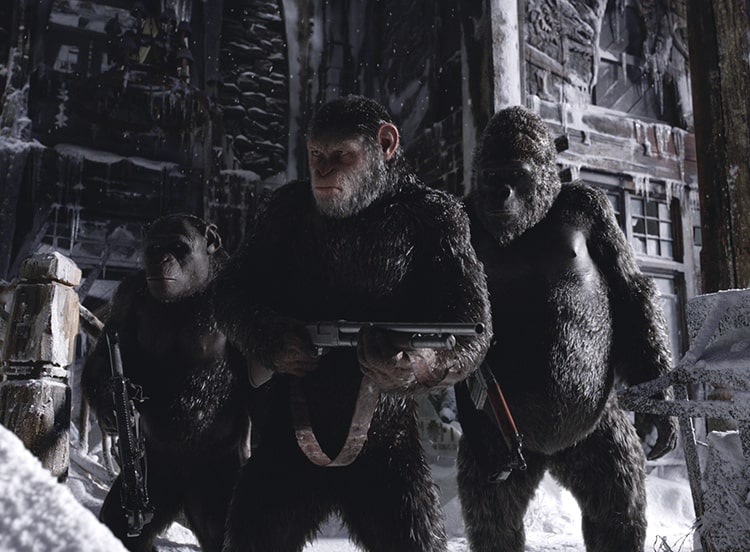 Want to Quit Your Job?

Considering it’s not a “Christian” film, it may surprise you just how much Christian imagery is featured in the story and set pieces of The War for the Planet of the Apes.

The latest (and possibly final? For now anyway.) installment of the sci-fi franchise which began in 1968 with Charlton Heston in the lead role shares much in common with another Heston epic—the 1958 The 10 Commandments, which racked up seven Oscars.

Crosses are featured prominently throughout the movie, as are references to the biblical exodus. In this world, where a man-made virus wiped out most of the human race and gave rise to sentient apes, we meet Caesar, the natural leader and ape who speaks and thinks most like a Greek philosopher. The humans, and some apes who have switched sides, are on the offense, and Caesar and his group only fight to try to ensure their survival against an enemy that wants to end their kind.

When an ambush kills key members of the group, Caesar and three companions journey out for a moment of reckoning and to create a distraction while the rest of the intelligent apes leave for a new homeland.

OF CG AND SHAKESPEARE

Ok, I’ll admit my laziness here as a film writer. I haven’t seen the first two installments in this trilogy, 2011’s Rise of Planet of the Apes or the 2014 Dawn of the Planet of the Apes and only caught this one in the theater to cover it for RELEVANT. If you’re going to see this one, Redbox the other two entries in the trilogy first. I wasn’t prepared for the emotional gravitas that this film brings to the screen. I mean, humans vs. monsters, right?

Rather than a typical summer blockbuster full of action, loud music and seizure-inducing camera jumps, War tells a more Shakespearian tale of love, haste, betrayal and desperation than you might see coming.

Technically, this still fits into the action/sci-fi genre, but the focus is on the journey of the characters rather than the battles and explosions.

This wouldn’t be possible without some truly stunning computer generated graphics. British actor Andy Serkis (Gollum, Lord of the Rings) once again dons a dot suit to capture his movements and facial features to bring a non-human character to life. He delivers a knockout performance in the lead role as Caesar that should cause critics to give pause and ponder the possibility of an actor playing a GC character being in contention this awards season.

All movie viewing requires some suspension of belief, but Serkis’ performance doesn’t require much.

Some of the apes communicate via sign language, and outside of an excellent antagonist played by Woody Harrelson, we don’t get to know many humans on a personal level. Which means that somehow director Matt Reeves (Cloverfield, 10 Cloverfield Lane) keeps the audience gripped in suspense for nearly two and a half hours largely with facial expressions, minimal dialogue, a sparse but hard-hitting score, and stunningly beautiful cinematography.

It’s not until after the credits role that it becomes obvious that you were emotionally and mentally engaged without virtually any cliches of the typical summer blockbuster.

Harrelson’s The Colonel, a villain driven by fear for his own survival whose sole purpose is ape genocide, is surrounded by symbolism. He wears a Catholic style crucifix featuring Jesus alongside his army-issue dog tags. A cross hangs in his headquarters.

The Colonel’s soldiers and “donkeys” (apes who have betrayed their own kind and now serve humans) are all tattooed or branded with the Alpha and Omega symbols, the same mark painted on an American flag for the military until Harrelson commands. These are the first and last letters of the Greek alphabet—God and Jesus are referred to by the phrase “the Alpha and the Omega” in the book of Revelation (verses 1:8, 21:6, and 22:13).

It’s a movie that couldn’t have been made without the books of Exodus and Revelation in the Bible, and yet God is nowhere to be found in the narrative, which has resulted in a handful of negative reviews from faith-based outlets, though the movie currently sits at 95 percent on Rotten Tomatoes. As a Christian, there’s no need to fear this excellent movie, as it’s not explicitly anti-faith.

In fact, it’s no explicitly anti-anything. In an era of filmmaking where Hollywood seems to believe the audience is too stupid to understand nuance, War is content to be a top-notch movie with a narrative open to interpretation.

Is this a call to take global warming more seriously? To go vegan? A stern critique of American foreign policy? Or is it a libertarian diatribe about government control? Or a parable about Americans going soft in the age of Uber takeout delivery and Netflix, a call to get tough again before this Empire topples a la Roman excess?

The answer to any of those questions could be yes, or no, depending on what attitudes, beliefs and expectations you take with you into the theater. Rather than being an anti-Christian movie, War is a story that reflects your own views back to you, faith-based or otherwise.

Following Baby Driver and Spiderman: Homecoming, War for the Planet of the Apes takes its place at the third must-see summer movie of 2017. Even if sci-fi isn’t your preferred lane, it’s worth catching on the big screen. Not only does it transcend genre, but this one is going to keep people talking, and asking questions, for quite some time.