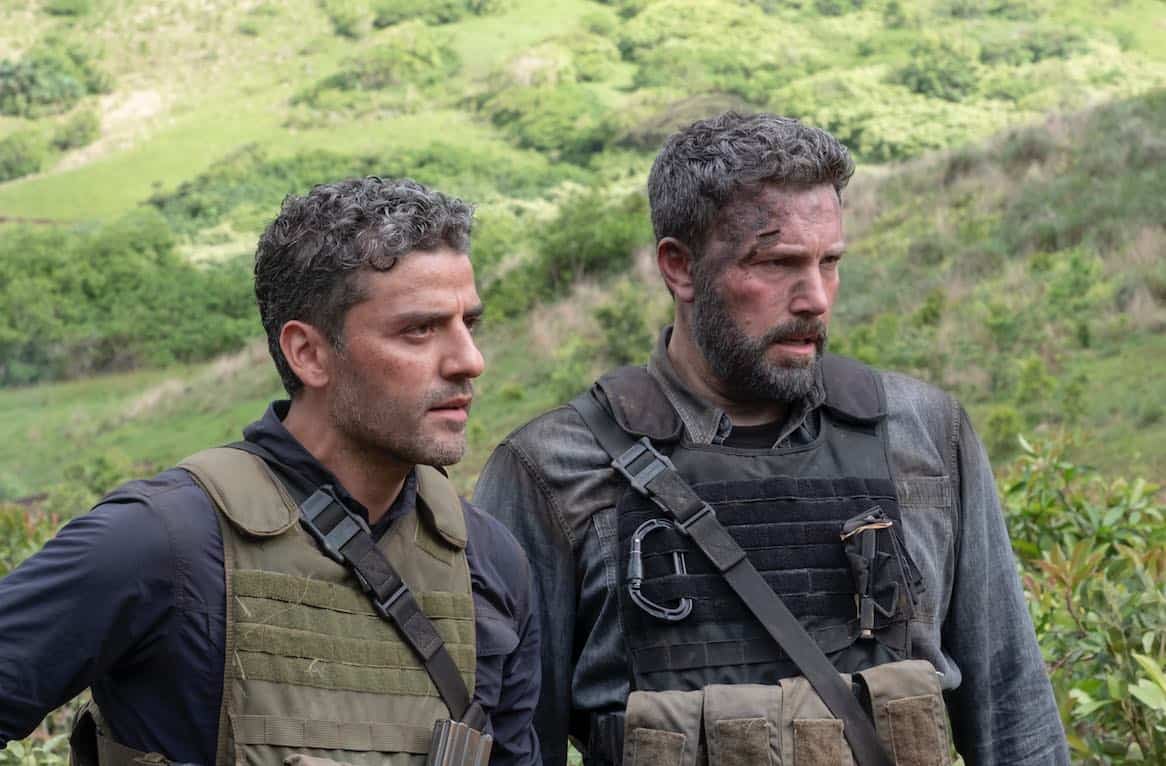 The best scene in Triple Frontier comes about halfway through the movie. The protagonists have laid siege to a drug lord’s house and, on intuition, open up a wall to find stacks of dollar bills. Their square, stubbled jaws break into huge grins as they shove the cash into canvas bags, and for about five thrilling minutes, a primal surge of dopamine rushes through you and the movie feels like a hoo-rah come to life on screen. You want to thump your chest.

The high fades quick. The back half of Triple Frontier devolves into hyper-masculine ego battles and tired looks at the cast of men past their glory days trying to be heroes. Even if it weren’t so rote, the weight of the movie’s incessant dourness would crush the mood on its own. For all its heist-movie beats—the stakeout, the slick early goings, the ensemble banter—Triple Frontier has a weary, furrowed brow from start to finish.

These guys don’t have time for jokes. There’s a job to do.

The men at work here are about as overqualified a staff as you’ll find on a movie screen in 2019. Oscar Isaac, Ben Affleck, Garrett Hedlund, Charlie Hunnam and Pedro Pascal span multiple Star Wars movies, several comic book franchises, fistfuls of Oscar nominees and more actioners than you can brandish a military-grade assault rifle at, though they’ll do plenty of that here, too. Their characters have names in Triple Frontier, but since you remember these five (beautiful) faces first, it really doesn’t matter what you call them. You’re supposed to look at these guys more than anything else.

At least they have cool things to do. Poe Dameron and Batman and Co. are ex-military operatives looking to steal money from a drug lord. As noted above, things don’t exactly go as planned, so the straightforward swipe becomes muddied with war ethics, violent dilemmas and competitive infighting among the King Arthurs and Inside Llewyn Davis stars.

That should be the main draw of this movie: Watch a bunch of famous men weigh the intense consequences of crime. It doesn’t bear out in practice.

Triple Frontier halfway tries to lionize its protagonists by giving them underdog reasons for the illegal activity they embark on, but these “better the life of my family” motivations aren’t externalized beyond the guys just stating its their reasoning for killing commandos and hijacking helicopters. It’s literally lip service, and that means you never quite believe these guys are the heroes they say they are. Perhaps that’s the point and Triple Frontier wants you to feel some conflict over this quintet, but instead of wavering, you end up just shrugging.

The movie isn’t trying, so why should you?

Heroes like the bros of Triple Frontier, with their myriad grimaces and salami-sized forearms, were evoked in a recent Desiring God essay called “Behold Your Queen: The Real Conflict of ‘Captain Marvel.’” That review ripped the MCU’s first female-lead feature for depicting “the armed princess turned feminist queen, who comes down from the tower to do what Prince Charming could not.” For that writer, the “deadly fruit” of Captain Marvel’s heroine is that she will “empower little girls everywhere to be strong like men.” Ah, yes, how dare they send a self-actualized, independently powerful and inspiring woman like Captain Marvel to do a man’s work!

Triple Frontier offers the male heroes Desiring God seems to prefer, but these Ken dolls aren’t the white-horse riders that John Piper’s corner of the internet is waiting for. These guys brood and sulk and cross their arms and sweat through their shirts, but they also engage in heroism without any semblance of joy or honor or valor. They don’t inspire you or thrill you or make you think in any way idealistically. They’re paper dolls who scream at each other. How pathetic that their most human-seeming, endearing moment comes when they’re butt-slapping each other as they shove blood money into duffel bags. Behold Your Kings.

Gender or sex doesn’t qualify a hero. Captain Marvel’s greatest asset is its lead character’s symbology, and Triple Frontier’s worst asset is how much it paints its heroism with solemnity, vengeance and greed.

Captain Marvel may be a fantasy, but better young girls aspire to photon blasts and a super-saiyan mohawk than protection from men who can’t define themselves with anything beyond their own arduous sacrifices. Great heroes make you feel strong enough to run to the battles worth fighting. In Triple Frontier, the heroes only succeed in making you feel burdensome, secondhand and complicit in criminality.

If men are our only option for culture warriors and thought leaders in 2019, we’re in trouble. Presenting figures like Captain Marvel, fantastical as she is, alongside classic masculine heroes doesn’t just further representation in storytelling, it compels more kinds of people to apply that fantasy to their reality and seek change in the world before them. Because at least Captain Marvel makes protecting what she loves look like a blessing, not a curse. At least she seems like she wants to defend humanity, even if some people try to reject her services.