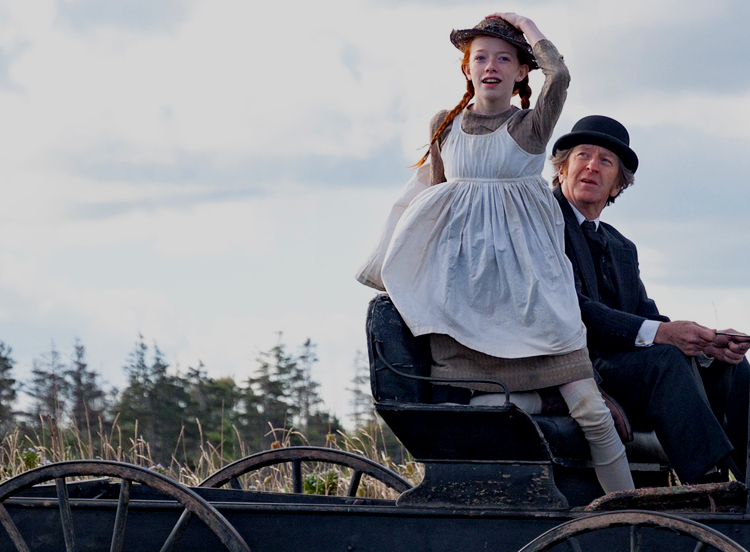 Trying to convince someone the new Anne of Green Gables remake is legit is almost like going to work and bragging about how great the front-row seats were for the Boyz II Men/New Kids on the Block/Paula Abdul reunion tour. Regardless of whether or not it’s true, public acknowledgment isn’t exactly going to win you any cool points.

But here’s the thing: Anne With an E, the latest take on the classic Canadian children’s novel, is not only good, but it also takes a successful stab at social commentary in 2017 without coming off preachy or heavy-handed, a difficult balancing act for any film or TV show.

If you’re not familiar with the source material, Anne of Green Gables was first published in 1908, based on author Lucy Maud Montgomery’s childhood in rural Prince Edward Island on the East coast of Canada.

Inspired by a newspaper article about an orphan girl who was sent by mistake to an aging brother and sister who were seeking to adopt a boy to help with farm work but decided to keep her anyway, the story follows Anne, an eloquent but emotional 11-year-old who comes to live with Matthew and Marilla Cuthbert, geriatric sibling farmers who have no idea how to parent a spirited pre-teen.

Since 1908, the original book has sold 50 million copies to date, and has spawned five sequels, half a dozen radio dramas and stage productions, and a staggering 20 attempts to bring the story to life on the big and small screen, via film and TV adaptations (including one very odd Japanese anime version).

The most well-known of which is a 1985 miniseries released by PBS, which you may have checked out from the library on VHS as a child, or at least have a vague recollection of a homeschool mom at your church raving about.

Which begs the question, does any story need a 21st remake? Thanks to Anne With an E we now know that the answer is a surprising yes. From the opening credits, it’s clear that this is an adaptation of a children’s novel aimed squarely at adults. The title sequence was created by Brad Kunkle, the artist behind the iconic opening sequences for Stranger Things, January Jones and Mad Men.

Paired with the opening visuals is the thrum of a song by The Tragically Hip, Canadian elder statesmen in the indie rock scene. The 41-second visual could well be the first part of a video for the rumored new Arcade Fire single, and serve as a statement to the audience: We’re not in 1980s PBS land anymore. The shift in tone and style paid off. Anne With an E currently has an 86 percent approval rating on Rotten Tomatoes.

Rather than just attempt to retell the story captured in the novel one more time, Anne With an E uses classic characters beloved by millions to explore issues facing our world today, albeit set in pristine Victorian Canada.

Without being heavy-handed, it’s clear that Anne the orphan works as a stand-in for the modern refugee. When Anne first attends school, she’s a bit socially awkward from spending most of her life in an orphanage, save a few years of “care” by a drunk and his abused wife, who beat her and treated Anne as a functional slave. After only a minor infraction, parents in town ban together to insist that Anne not return to school, citing her as a danger to the other children.

There’s a general feeling of pity toward the orphan girl, but that pity is overwritten by a fear of the outsider. At no point does any character on screen use the phrase “Syrian refugee,” but it’s fairly obvious that’s what the show’s writers are trying to get you to wrestle with.

One clear deviation from the source material involves Marilla, a first-time mom in her late 60s, attending a meeting of mothers that involves needlepoint, book discussions and debates on women’s rights. The novel is set eight years before Canadian women would be granted the right to vote and 12 before the 19th Amendment would be ratified in the United States. Marilla, who never left home or married due to being “needed” on the family farm after the death of her older brother, is far from a feminist.

But after the meeting, Marilla admits that she wants Anne to have more options in life than were presented to her.   One of the reasons that these plot changes don’t feel overly forced is that the acting and cinematography are stunningly good.

Visually, Anne With an E holds its own against any show in production today, and newcomer Amybeth McNulty is the kind of actress that you assume will be up for an Oscar nod at some point in her career.

The Negative Role of the Puritanical Church

Christianity does come into play in Anne With an E, and it’s not in a positive light. But rather than see the show as anti-Christian, it’s best to view it as an accurate portrayal of religion in the late 19th and early 20th centuries on the Atlantic coast.

In the past decade, there’s been a movement in millennial Christians to romanticize the Puritans, who can come off as the ultimate 16th-century hipsters, with their standing up against the man in the name of religious freedom and passion for brewing good beer. But these were also the people who burned their innocent neighbors alive for “witchcraft,” and who would beat their children for showing any emotion, from joy to anger, in public. Toys and games were seen as “distractions” at best and Satan’s tools at worst, and were often as taboo as emotion.

Puritans also put a strong emphasis on “breaking of the will” of a child. The church viewed children as being born naturally stubborn with “unacceptable pride,” which had to be extracted through tedious chores and corporal punishment. Even the mandatory bi-weekly church services weren’t safe, as many Puritan churches supplied ushers with small clubs to hit any child who dared make a noise or fall asleep.

When the pastor from the local town of Avonlea is called in for an impromptu family counseling session to help Anne adjust to her new family, his advice is more or less “sit down and shut up and maybe you won’t go to hell.” Which is not the best method to help an 11-year-old who has endured physical abuse for much of her life at the hands of an alcoholic. Later, Marilla confesses that she thew out all of the family’s wine, lest she face the wrath of the preacher.

Women had few rights in the U.S. and Canada circa 1900, particularly on the Puritanical Eastern seaboard. But children essentially had none, and were considered the property of their parents. Sadly, it was the Protestant Church that led this movement for nearly three centuries. Rather than be upset that Anne With an E points this out, Christians should be prepared to face a dark chapter in the history of our faith in North America.   Despite all the heavy content, Anne With an E deals with serious themes without becoming a downer.

The seven-episode first season contains several laugh-out-loud moments, and it’s a show that’s consistently quick on its feet, switching from punchy comedy to serious drama. Like another Netflix original series, Dear White People, Anne can make you laugh one moment and then make a hairpin turn that forces the viewer to stare down a heavy social issue without coming off as disingenuous.   This isn’t the Anne of Green Gables of your childhood. Which is precisely why it’s worth adding to your Netflix queue.

Which is precisely why it’s worth adding to your Netflix queue.

The United States Is Expected to Leave the Paris Climate Agreement