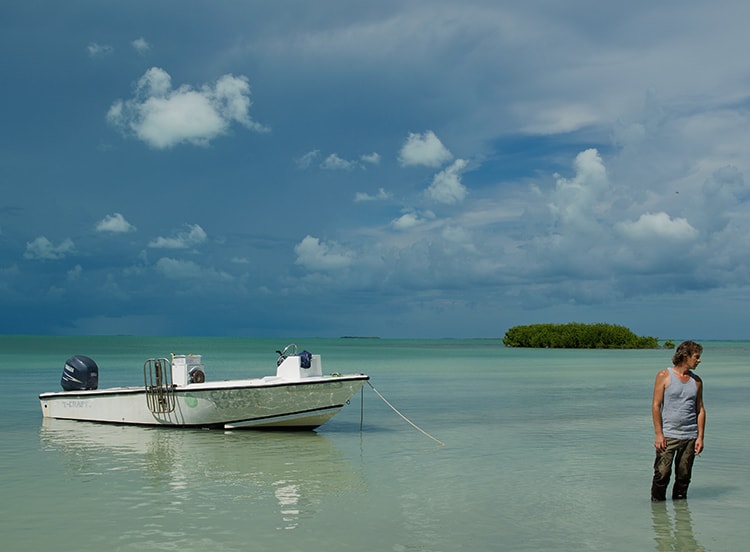 Editor’s Note: This article contains spoilers. So if you’re still watching Bloodline, either turn away now or embrace the following as something of a study guide.

Don’t let the edenic setting fool you, the story of Bloodline takes you somewhere far, far away from paradise.

Nestled within the Caribbean-like landscapes of Monroe County, Florida, we meet the Rayburn family. The elder Rayburns, whose life work is a stunning inn on the beach of Islamorada and a well-earned place as permanent fixtures in their community, have four grown children. The favorite is John (Kyle Chandler, Friday Night Lights), a widely respected police detective married to his high school sweetheart with whom he has two teenage kids. The precocious go-getter is Meg (Linda Cardellini), and the baby—the more blue collar, struggling sibling—is Kevin (Norbert Leo Butz). Then there’s the eldest, Danny (Ben Mendelsohn, Rogue One).

If the Rayburn family owns a problem, it’s a fairly typical one: The oldest Rayburn son is a prodigal.

The first two seasons of the Netflix original garnered wide acclaim, with celebratory reviews, fresh ratings on Rotten Tomatoes and four Emmy nominations—all for the two principal actors, Chandler and Mendelsohn, who won the award for best supporting actor in 2016.

Last month, the third and final season released, and so far, critics don’t seem as friendly. Granted, the latest season became the victim of Floridian politics. Between seasons two and three, the state ended entertainment tax incentives that ended up making the Keys too expensive a setting for Netflix to sustain.

But don’t let the relatively quiet release of season three and the tax drama distract you. Bloodline, in my opinion, is the best show on Netflix, and if you’ve been around me since its release, you’ve heard me say it might even be better than that.

Significant for All the Right Reasons

The easiest complaint about Bloodline remains its aggressive, often trippy timeline, which can be hard to follow if you’re not paying close attention. Even then, you’ll likely find yourself debating the interpretation of certain time-shifts, whether you’re watching something from the future or past, or whether maybe it’s imagined by one of the characters. No shortage of critics note this, but they generally make too much of it.

You notice from the start you’re watching something special. Bloodline features some of the best-written dialog in memory, and the show’s cast alone sets makes it worth watching, with lingering characters played by legendary actors like Sam Shepard and Sissy Spacek. Really, no character disappoints, from lesser-known actors like Cardellini, Butz and Jamie McShane to recurring roles from Chloe Sevigny and John Leguizamo. And as a native Floridian, let me tell you, the aesthetic of the show is pitch-perfect, from wardrobe choices to the character’s cars to their perpetually sweaty faces.

These attributes bring you into a the world of nearly unmatched beauty—the beauty of a healthy, happy family living in one of the most beautiful places on earth. But as quickly as you learn Bloodline’s quality, you also learn that the Rayburns’ problem is bigger than a prodigal.

Just watch one episode of Bloodline and you’ll hear John’s defining line: “We’re not bad people, but we did a bad thing.” You find out soon enough John is lying—he’s telling a boardroom full of people the bad thing he and his siblings did is isolate their oldest brother, Danny. But that’s not entirely true. You see, John murdered his brother.

Like when Cain killed Abel, this murder changes everything. But John and Danny’s qualm isn’t as black and white. Quite the opposite, sympathy for John pulls the show along. Unlike the Machiavellian menace of, say, Francis Underwood, we can all relate to John. His actions appear justified, especially if you imagine yourself with such an erratic, threatening brother.

The set up for Bloodline won’t necessarily surprise anyone. It’s a family drama meets a morality tale, some mixture of The Sopranos and Breaking Bad. And sure enough, Danny’s murder ignites a wildfire the three other Rayburn siblings can’t extinguish (other than John, Meg and Kevin are the only ones who know about it). The show’s foggy timeline parallels the character’s experience: All the recent events run together, they’re somehow connected to the family’s past and the future seems more like a dream. The Rayburns go through this, and so do we viewers.

Still, John’s lie isn’t really about the difference in killing and isolating Danny. His lie—both to this board and to himself—is that he and his family are good people.

Fairly early in Bloodline, you learn the show’s ostensible defining event, isn’t actually the event that defines the show. The quartet of Rayburn siblings weren’t always so few. As kids, they had another sister named Sarah. At some point in the past, Sarah got upset upon finding out the Rayburn parents planned to divorce. Preteen Danny, feeling some kind of responsibility as the oldest, takes Sarah out on the family skiing boat. There’s an accident, and Sarah dies.

Their father loses control and beats Danny. Badly, and in front of John, who at the time is the only kid old enough really to remember. Someone gets ahold of their mother, who is at that point on a bus to anywhere, and she returns to Islamorada with a dead daughter and a nearly dead son.

They take Danny to the hospital under the guise that he was hit by a car. When local authorities investigate, the elder Rayburns tell their children the “official” story and they all lie. But John is old to enough really to know what was going on. And that, far more than Danny’s murder, is the defining event of Bloodline. The “blood line” isn’t from Danny’s body—it’s from Sarah’s.

The nuance of the family dynamics allows Mendelsohn to shine. The facet about Bloodline most likely to stay with you is the Danny character. Mendelsohn channels a different kind of creepy—his performance alone earns the psychological thriller label—equal parts loose cannon and radically self-centeredness. What makes Danny scary is his familiarity. He embodies the family member you can’t figure out; he can be in one instance embittered and vengeful, abused and abusive, brokenhearted and threatening. He was permanently hurt (physically and emotionally) by his own father, then saw his siblings lie to protect his attacker, all in the name of preserving the family.

This secures Danny as the perpetually outcast, cast out for knowing (and being the victim of) the family secret and for the behavior it produces. For the majority of Bloodline’s story, Danny remains the central antagonist, though you see more and more he’s really been a victim the whole time.

The Rayburn kids aren’t good people who merely did something bad. They’re their parents’ children, Darwinians in the darkest possible way—set toward preservation at any cost.

The Gospel according to Bloodline

There’s a way of reading the Old Testament as tragic literature, something like Shakespeare’s tragedies. That can be difficult for Christians this side of the canon, but think about it: Starting in the third chapter of Genesis, humanity sets out on a centurieslong search for the man who could reverse the curse of sin and return the world to its garden state. If you’re turning the last pages of Malachi any time before Jesus actually arrives (or before you know who he really is), you’ll read the story of a people stuck in longing. Sure, hope-filled passages like Genesis 3:15, Isaiah 53, Psalm 1-2 remain, but without the context of what—or who—happens next, we’re not talking about hope in the same way we experience it.

This brings us back to Danny and his mysterious son, Nolan. If the idea of a father turning his back on his son, as the son simultaneously suffers at the hands of his own people sounds familiar, it should. You certainly can’t call the connection between Danny and Jesus a clear one-to-one, and Nolan is hardly an incarnation. But if you miss the purpose of Danny and Nolan, you miss the whole point of Bloodline.

For all their efforts, the Rayburns can’t keep the family intact. In the end, Sarah and Danny are dead, the remaining kids functionally disown their widowed mother, Meg runs away and changes her name and Kevin gets caught up in the drug trade and ends up arrested by federal authorities. John, after losing every member of his family, tries the only thing left—turning himself in. But he can’t escape his own reputation, and the people to whom he confesses take it as a lame but endearing attempt to sacrifice for his family. And no one takes him seriously.

But then there’s Nolan.

We meet Nolan at the end of season one, right as the remaining Rayburn kids think the worst is behind them—Meg and Kevin are the only ones who know what really happened to Danny, and they support John for “doing what he had to.” Nolan, we find out, is Danny’s teenage son who almost no one knew about. For most of the series, he is a peripheral character who more or less adds complexity to Danny’s plight. But by the middle of the last season, Nolan increasingly understands the Rayburn dynamic, even though he doesn’t know why the family rejected his dad (and thus him) and what really happened to him.

When John’s attempt at legal, political justice fails—he can’t even turn himself in—he sees that his only hope for relief is a deeper, moral justice. You see, the only person untainted by the Rayburn cacophony of deception is the same person most affected by it. And he’s the only person capable of changing the future of the Rayburn line.

Throughout Bloodline, John hears Danny’s voice ringing in his head (maybe in his memory?) asking, “When is it going to end, John?” Over and over and over again. Initially, you think Danny is asking John about the weight of his lie. But in the end, we see that’s not all Danny’s ghost intends: John carries the weight of his entire family, a group of people eroded by deception and evil attempts at self preservation. And the voice calling from the grave pushes John to end it—the whole thing.

The implication is that John and the Rayburn line can actually be free, but first there must be confession to a cast-off son.

Bloodline ends with John facing Nolan on the dock behind the Rayburn family inn (the same dock Danny used to take Sarah out on the water, the same body of water John used to drown Danny). He now understands what haunts him isn’t just guilt, it’s a longing for freedom. It’s a messianic longing. And we’re left to wonder if the hints of hope in Nolan will come to pass.

Watch Bono Pay Tribute to the Victims of the Congressional Shooting

OMG: What Does It Really Mean to Use the Lord’s Name in Vain?