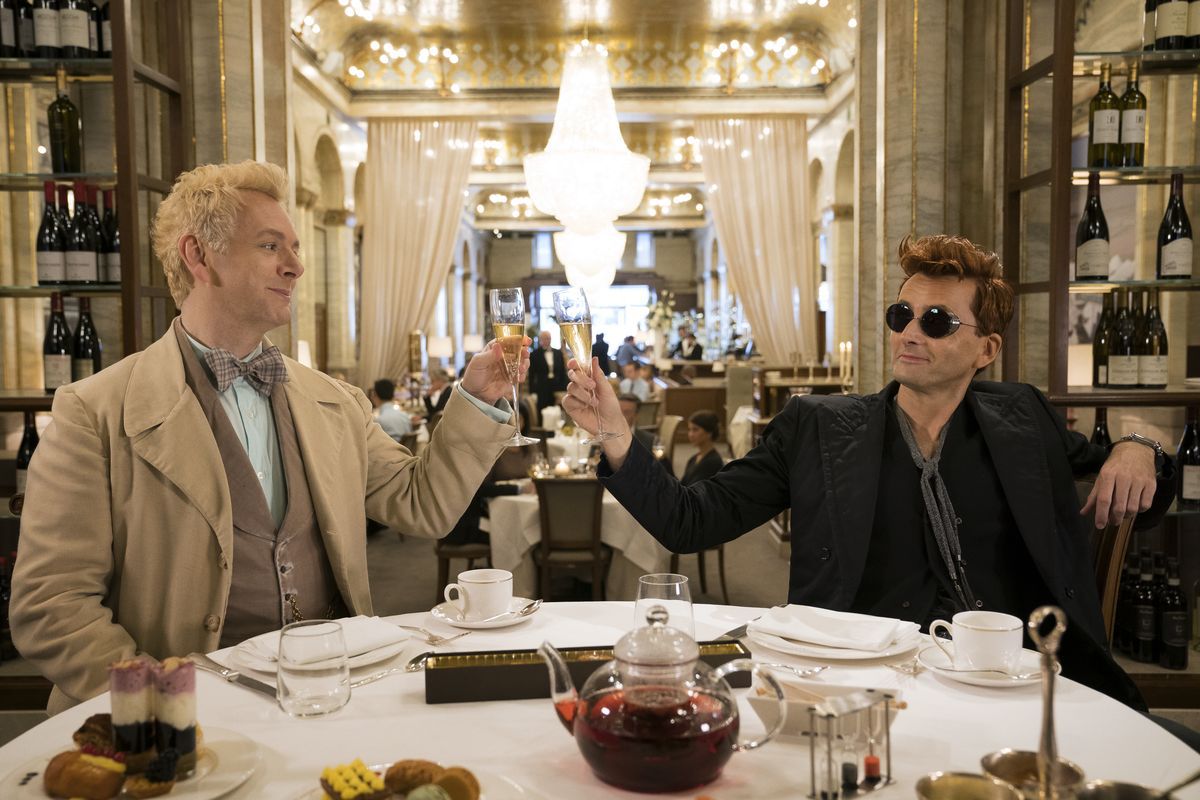 If religion is fertile ground for comedy, radical religion bears fruit year-round. Cultural shifts have turned the paranoia and fear-mongering of fringe faith groups into oft-amusing peculiarities, and while these backward-looking sects can have insidious impacts on vulnerable groups, that reality makes them more worthy of satirical target practice. Good Omens, out on Amazon this Friday, is positioned to aim at the way religion meets the human experience, but it’s frustratingly broad. Even as a blasphemous comedy, you wish its focus was more precise.

For cautious faith viewers, the Good Omens miniseries (and the 1990 book it’s based on) has a hair-raising premise: An angel and a demon who have spent the course of human history lounging on Earth have their de-facto vacation disrupted when the demon is ordered to begin the apocalypse. Cue a cosmic war over an infant anti-Christ nobody can find, narrated by God (the voice of Frances McDormand). On-paper, it’s gold.

The humans-as-ant-farm construct, in which petulant divine beings condescend to us normies, is common in supernatural stories, but Terry Pratchett and Neil Gaiman’s original novel deployed this trope better than most. The book granted humans more compassion than the cosmic forces acting upon them, and even if all the character work and plot development went toward the angels and demons, that service never came at human expense. The divine exploitation of humanity was cruel in Good Omens, never fun.

The same twist doesn’t materialize in the miniseries, which doesn’t concern itself much with humans at all, even as a backdrop. The focus here is the angel Aziraphale and the demon Crowley trying to coast their way through the end times, and while Michael Sheen and David Tennant seem to enjoy bantering away in their respective roles, Good Omens never seems to find any urgency itself.

This show didn’t need to turn religion into a punchline, but it invites the inquiry because it positions itself alongside explicit faith systems so readily it creates the expectation of commentary. An early scene shows Aziraphele and Crowley in the Garden of Eden, and while the joke that lands isn’t bad (it involves a flaming sword; you’ll see), you can imagine a bolder show taking shots at the concept of Original Sin, temptation or even how the church turned Eve into a scapegoat for retrograde gender politics. There were rich comedy veins to tap here, even ones that picked at deep-rooted spiritual issues. Good Omens passed on them all.

This lack of ambition becomes most clear, and most frustrating, during a mid-season montage that places Aziraphale and Crowley at pivotal points in human history, tracking their apathy through the likes of the French Revolution, the bombing of London and the death of Christ. In the final scene, they observe Jesus on the Cross as rubberneckers would observe a car accident. They make bemused comments and furrow their brows, but they don’t offer any substantial thoughts to the scene. Next to something as thoughtful as Monty Python’s Life of Brian, which used the entire gospel narrative to criticize weak modes of faith, it feels unenergetic and, perhaps worse, uninspired. Even if Life of Brian took a harsh stance against blind faith, its conviction was more interesting (and much funnier) to watch than Good Omens’ passive observation.

That’s not to say it should be open season on satires against Christianity itself or Christians as a body of believers, but as long as the invitation is out there by way of the church’s very real shortcomings, pop culture that uses humor to engage with these topics has to carry more conviction than Good Omens.

When John Mulaney jokes about Catholics and “peace be with you” in his stand-up (watch for language in that clip) or Dana Carvey plays The Church Lady on Saturday Night Live, there’s valuable criticism on the dark side of those bits. The former is a wiseguy way to take down the way the church evaluates itself, and the latter is probably the best cultural item we have about the way churchgoers code-switch or manifest as hypocrites. These are pervasive issues, and it matters when comedy exposes these truths in a way that even buttoned-up Christians, with their stricter cultural boundaries and wary eye for pop-culture threats, can receive in—is there a better way to put it?—good faith.

It’s disappointing Good Omens stays on the sidelines of this dialogue. Pratchett and Gaiman’s book is terrific source material, and with Jon Hamm playing Gabriel and Frances McDormand voicing God behind Sheen and Tennant, the series is loaded with talent and potential. Ultimately, no one has anything meaty to chew on.

Spiritual satire tells us how people are connecting with the church, and Good Omens could have been a timely measuring stick. Critics make modern Christianity better, so it’s too bad this show is just joking.

Bestselling Author R.O. Kwon On Why She Stopped Believing in God

Missionary-Rescuing Hero Rambo Is Back in This ‘Last Blood’ Trailer