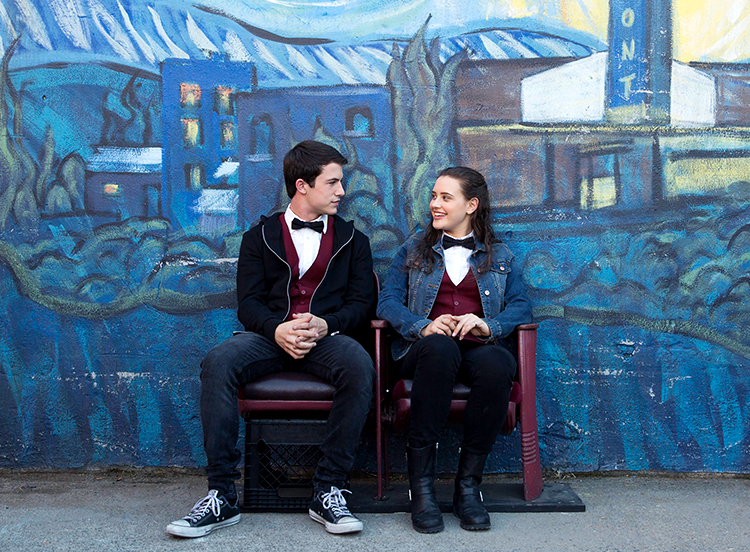 While Christians around the world, including myself, were practicing the rituals of repentance, mourning and rejoicing over the story of Christ’s sacrificial life, I was also spending my evenings eating cold turkey and egg noodles and sinking into the dark story of Hannah Baker, a doomed and broken teenage girl. And the life and death of Hannah Baker are an allegory with quite a different outcome.

I knew this show was bad, but I couldn’t figure out why—so I kept watching it. Many elements of 13 Reasons have been called out as disturbing.

Some critics have called the show a glorification of teen suicide. Others have trouble with its strangely twisted-up version of feminism. Some are simply disturbed by the corny suspense tropes and clunky dialogue that plague the 13-episode series.

Perhaps 13 Reasons Why is simply bad TV.  Parts of it are silly; overwrought; implausible. The tensions between the teenaged characters alternately escalate and dissipate without provocation. The moral definitions are continually being blurred, which makes it hard to understand character motivation.

There’s no such thing as a subtlety (in one scene, our hero literally wears a T-shirt that says “HERO”), and the irony is so heavy-handed that it falls flat on its face (the high school, home of Hannah’s torment and ultimate undoing, is named Liberty High).

13 Reasons Why is bad because it tells an important truth, but only part of it. It takes us to a terrible place, and leaves us there.

Hannah Baker’s story rings with the truth of what many of us don’t want to believe: People are evil. It’s one of those things that we all find out, sooner or later. Some of us can take it. And some of us, like Hannah, can’t.

In the world of 13 Reasons Why, Hannah’s weaknesses as a narrator are acknowledged several times before being brushed aside. Because she is dead, it doesn’t really matter if Hannah is recollecting her story with accuracy. Her warped and sad perspective trump all other forms of truth. She earns the rights to what happened by being a victim of it. This by itself is troubling, but the narrative goes one step further.

Hannah’s version of the truth must be ratified, and her death must be avenged.

By her account, we are told that Hannah has been wronged irrevocably. She is denied justice at every turn. It is infuriating and deeply upsetting to watch her search for comfort and validation and find no advocate.

We are meant to empathize with the harsh realities of cyber-bullying, victim-blaming and rape culture in the life of the American teenager. “Hannah made her choice,” the characters tell each other robotically, unconvincingly. In the audience’s view, Hannah’s choice is made out to be perfectly legitimate.

Amongst her faults, Hannah is also resourceful, intelligent and inventive. She decides to end her life on her own terms. It will not simply be a suicide. It will be a weapon of revenge. Her death is a power-play. She bullies those that bullied her, setting off a chain of events that brings a reckoning to all that contributed to her suffering.

Though the tragedy unfolds with a deftly-played emotional resonance, there is no dignity in Hannah’s demise. Only horror.

[Heads up, this paragraph contains some spoilers.] We root for Hannah to pop out from behind a curtain, reassure us somehow that she made it. That she faked it all, that she’s been hiding out, and now everyone has learned their lesson—herself included. The relief never comes. All those left behind feel a tide of dread that rises up and eventually carries them away with it.

13 Reasons Why reinforces one of the worst millennial ideals, that your life is only as valuable as you think it is. You’re as useful as your body is capable of being. And if you’d have more of an effect on others in death than in your life, then maybe death is a decent course of action.

Hannah’s so broken and disappointed that death becomes a way to reclaim her own agency. To the show’s credit,  the dialogue condemns that decision. But the plot tells a different story.

Death is simply the separation of soul from body. We intrinsically know this destruction is an epic one, with eternal and unknowable ramifications. That’s why we’re mostly inclined to try to stay alive. The struggle with mental illness sometimes leads us to a place where the deep mystery of death becomes more appealing than the knowledge of continued suffering.

This is not what happens to Hannah Baker.

She is depicted as being literally fine until people in her life turn her into a ticking time-bomb. Her suicide is her final performance, her way of showing them up. In this manner, the show minimizes mental illness. If people would just be nice, it seems to say, then nobody would be depressed and want to kill themselves.

This is simply not the case.

The most unsettling thing about 13 Reasons Why is not Hannah’s version of the truth being canonized, but it is her nerdy and hoodied avenger-in-chief, Clay, elevating Hannah to a place of sainthood. Hannah becomes a martyr; her death a rallying cry; her accusations from behind the grave, convictions. Ending her life gives her a mythical status in her peer community. It also makes Clay realize that he loves her. This is the most baffling message of all to send to an audience of teens and young adults.

13 Reasons Why is a fiction that takes place in an alternate reality (and not just because they call Walmart “the Walplex”). In our world it’s true that people are awful, evil and live lawlessly. But suicide will not rein this evil in. It will only give evil a license to be worse. Love that’s thwarted by the hardships and trouble of life cannot be realized and fulfilled because of death.

A martyr isn’t someone that dies for themselves. They die to save somebody else. And our redemption can never, ever come to any of us through revenge.