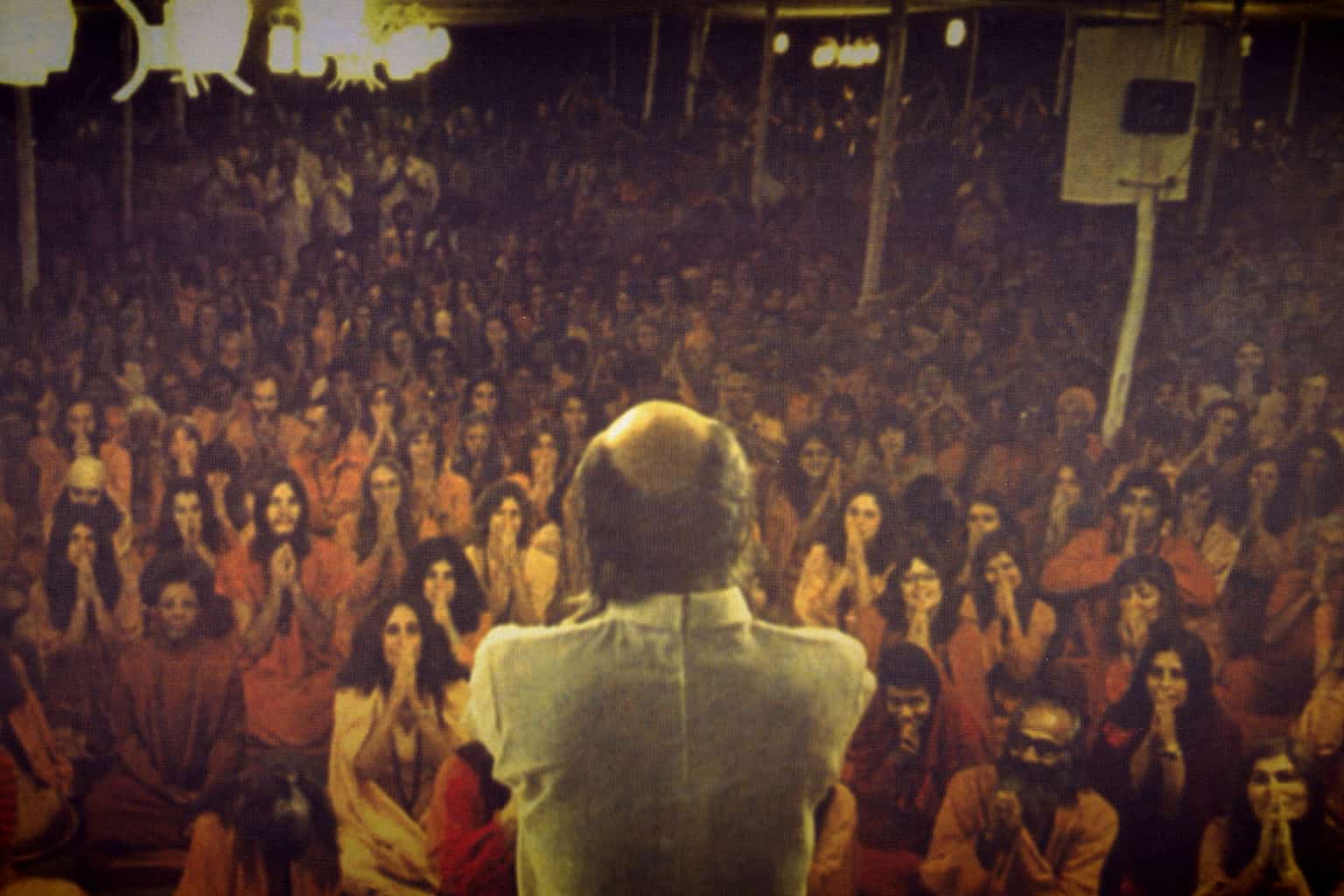 Wild, Wild Country is—to use a word as rich and indulgent as the cult it details—intoxicating. The footage of the Rajneeshees and their guru leader Bhagwan is shocking. Their schemes against Wasco County are chilling. Their interviews are as controversial and provocative as you’ll see in a documentary. The entire slate of insanity compels you toward one, inevitable question: How could anyone believe this?

Really, that question is just the starting point because the Rajneesh don’t really believe much of anything, at least in terms of specific doctrine or dogma. The guru Bhagwan based his philosophies on abstractions like “the affirmation of life” and “playfulness.” The word “enlightenment” is used, but more to describe a state of ecstatic self-knowledge than any particular relationship between the practitioner (called a “sannyasin”) and the world around them.

Instead of explicit ideas, Bhagwan and his disciples base their movement on techniques and practices designed to facilitate that enlightenment, like spastic meditation or promiscuous sex. So the Rajneesh as a people don’t peddle in philosophy so much as lifestyle. If it sounds elusive, intangible or slight, that’s because it is, probably by design. This is one of those “not a religion, but helps you find what’s best for you” kind of cults.

Throughout Wild, Wild Country’s six episodes, Bhagwan, his pseudo-lieutenant Sheela, and the sannyasins present their ideas from a standpoint of global permeation. If we all submitted ourselves to desire and pleasure-seeking, the world will achieve a peace unknowable through other forms of resolution. It’s a lie, the implication that we can achieve a selfless world through selfish pursuits.

It’s easy to come at this idea from a Christian perspective and shake your head at it, especially if you’ve been raised your whole life to follow Jesus. Christ taught that searching for answers within yourself, with no intimate guidance from the Holy Spirit, is fraught with peril—particularly when that search for answers is being dictated by cult leaders with their own agenda. If that’s all you’ve known, you might dismiss “finding yourself” as a silly notion, but Wild, Wild Country affirms that for many people, it’s incredibly attractive.

Take Bhagwan himself. The man  had some sort of charisma, considering tens of thousands of people uprooted their lives to follow him to Oregon, but really, the footage in Wild, Wild Country depicts someone clearly influential, but not all that striking, either in tambour or manner or appearance. We’re left to believe that the real attraction for the sannyasins were the ideas Bhagwan put forth, and those ideas must be alluring specifically because of all that elusiveness and vagueness we’ve already talked about.

The idea of “finding yourself” speaks to our innate desire for self-mastery. We want control over ourselves, and that desire shouldn’t be scoffed at. Control could mean security in your finances, fulfillment in your career or even steady mental health. There’s nothing wrong with self-improvement, but the lie of the Rajneesh, and the delusion of the people we see in Wild, Wild Country, is that self-improvement inevitably leads to a better humanity.

For a people oriented toward peace, it’s baffling how corrupt and sinister the Bhagwan, Sheela and the Rajneesh movement proved to be. They poisoned local townsfolk and exploited thousands of homeless people to take over Wasco County (Wild, Wild Country shows the Rajneesh taking in the homeless, but doesn’t report that many of those homeless people were turned back out on the streets of Oregon after their purposes in the election had been served.). They ran assassination attempts on local officials, and often ran coordinated chemical attacks on their own members in order to maintain an exclusive power ladder. The Rajneesh were insular, secluded, cutthroat and aggressive. Not what you would associate with a pleasure-centric, pacifist movement.

Of course, not every sannyasin shared those characteristics, but the victims of the Rajneesh leadership’s malice and duplicity unwittingly demonstrate that pure intent, even amid a culture of positivity and optimism, is near impossible. Altruism in a broken system takes persistence, because (shocker) when you operate on self-focused ideas, you start thinking about everything in terms of personal gain.

Again, it would be easy to dismiss the sannyasins at this point—Well, it was their fault for staying—but it’s hard to turn your back on something that seems to carry so much potential. Self-discovery is not a fleeting wish, no matter how vapid some of the movement’s contrivances can be. Because we’re people, we think about ourselves all the time, and the prospect of having total control, total confidence, total peace with yourself is impossible to ignore, especially in the seductive and simple context of the Rajneesh. People stay in cults because the cult is the only answer they’ve ever heard that makes sense. People stay in cults because it’s the only place that makes their problems seem beatable.

Wild, Wild Country is a flawed series—it’s too vague about Bhagwan’s teachings, and the filmmakers don’t exactly fact-check their sources—but its shortcomings illuminate the natural human desire for answers and solutions. “Finding yourself” is a cultural scam, and it works because in the absence of truth, people will latch onto whatever makes them feel in control. When we feel like we have control, we want to stay in that place. It’s comfortable, and when we’re comfortable, we tend not to ask too many questions.