The scene in question featured a bereaved mother being forcibly raped by her own brother next to the lifeless body of her recently murdered son. Incest has been something of a Game of Thrones trademark, but the gut-churning mix of rape, incest and murder all in one shot was a new low for a show that has sunk to some very sick ones. The show’s director compounded the problem by hesitating to call the actual action “rape,” saying that the sex “becomes consensual by the end”—an awfully troubling phrase.

It’s shocking, but it shouldn’t be.

What is shocking, perhaps, is how the mainstream culture just isn’t having it anymore.

I’m not opposed to shows depicting sexual violence, but rape-as-prop is always distressing, particularly in a show like this, where that disregard echoes the kinds of ideas that foster rape culture in the first place: that women’s feelings don’t matter, that sexual agency isn’t a big deal, that rape is something that just kind of happens and that healthy people simply move on.

Lyons was not alone in denouncing the show’s depravity. The Atlantic called it “an appalling mistake.” TIME bristled against GoT‘s showrunners’ defense of the scene, saying “This is not a gray area.” Wired said that the show is “doing something very, very wrong.” Jezebel leveled the most straightforward review: “Seriously, that was some despicable s***.”

It’s part of a new trend in culture. Call it the sexploitation backlash. After our culture’s pendulum of depicting raw sex swung to its absolute nadir, the first signs of a reversal are upon us. And it’s not just rape-fueled incest that’s under the gun.

Take HBO’s gargantuan winter hit True Detective which (like Game of Thrones) features some stellar writing but also (again, like Game of Thrones) can’t resist frequently reducing its actresses to writhing set pieces. The New Yorker‘s Emily Nussbaum called the show’s sex scenes “absurd.” Sam Adams at Indiewire said its obsession with sex made it “awfully hard to accept True Detective as the sobersided philosophical inquiry it presents itself as: Phil-bro-sophical is more like it.” Erik Adams at AV Club couldn’t shake “the feel that True Detective is in a great big rush to get [actresses] out of their clothes.”

That last point is frequently the crux of the criticism, as women are so frequently stripped down to props while fully dressed men handle the serious business of moving the plot forward. As Ed Morrisey said on Hot Air, “The nudity comes almost entirely from women who don’t have significant roles on the male-centric series in which they appear …Naked female bodies don’t drive narratives in most cases, but serve as sales pitches for products that shouldn’t need them in the first place.”

Of course, this outrage is all directed at immensely popular television shows, so it’s a little early to say sex is on the way out at television. But the fact that so many television critics are taking serious issue with how shows are treating their women and sexuality is notable, if only because this sort of outrage was generally laughed off a few years ago. When shows like NYPD Blue first started exploring the boundaries of sex scenes on television, it was largely seen as progressive. Anyone who objected to such depictions were quickly derided for being too conservative, too “anti-sex” or just too old to get it. Televised sex was the future, but now that that future is upon us, culture is showing signs of buyer’s remorse.

Last June, TIME wrote about the “epidemic of nudity on prime-time TV,” which noted that flesh-baring scenes on TV may be on the rise, but the public’s acceptance of such nudity is on the decline. “I thought [nude scenes] would be a big game changer for adult content in prime-time TV, and it wasn’t,” it quoted NYPD Blue creator Steven Bochco as saying. “I don’t know if I could get that on a broadcast network today.”

The Decline of the Hollywood Sex Scene

One place where explicit sex scenes are on a definite decline: Hollywood. According to Entertainment Weekly “the last time a movie with a real star-on-star love scene topped the yearly box office …was 16 years ago when Jack and Rose fogged up the inside of a town car in Titanic.” The ’80s and early ’90s were a boom time for silver screen sex scenes, but their decline has been sudden and dramatic.

Some of the reason is simple math: R-rated movies just don’t make as much money as PG-13 movies do, so studios are eager to chop their films into relatively tame affairs. There’s been virtually no hint of sex in any of Marvel’s recent blockbusters or the Harry Potter franchise, and those films have set the bar for what’s going to make money in today’s market. Independent and high-minded films might still be able to find room for an explicit scene, but even that’s on the decline. In 2013, not a single Oscar Best Picture nominee featured any sex. As for this year, Wolf of Wall Street was packed to the brim with sexual deviance, but the rest of the nominees—with a few exceptions—generally avoided the steamy, explicit fare once so common in R-rated cinema.

None of this means that culture’s love of hyped-up onscreen sexuality is over. Not when Robin Thicke’s “Blurred Lines” music video can still land 300 million views. More to the point, a study by the New York Film Academy found that, from 2007-2012, 26.2 percent of women in the top 500 films got at least partially naked on screen, as opposed to only 9.4 percent of men. Exploiting and objectifying women on film remains a serious issue.

But recent trends do point toward a changing wind in culture—a sense that sex and nudity and female actors in particular might be deserving of a little more respect than they’ve been getting over the past decade.

In that time, the Church has harped on Hollywood’s sexual excesses so often that it’s become almost a joke. But cultural trends may actually be slowly aligning with biblical views on sexuality in this regard, which provides us with an opportunity to move forward. And that direction ought to be away from a simple, shrieking criticism of sex in Hollywood, and towards affirming and honoring the dignity of female actors.

Because in a culture that fashions itself as progressive and forward-thinking, cultivating a double standard of exploitation is only moving us backward. 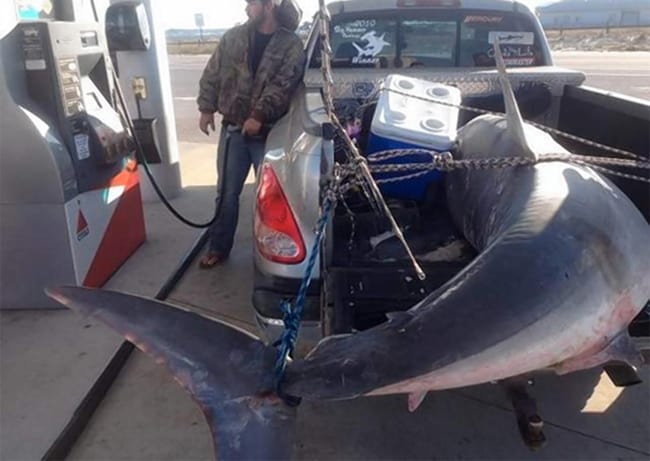 Always Check the Rules Before You Eat Your Record-Setting Shark