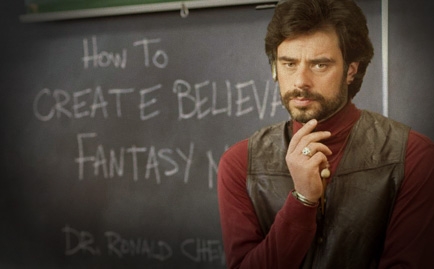 Husband-wife duo Jared and Jerusha Hess literally came out of nowhere—well, the heart of Utah—in 2004 when they made their first feature film, Napoleon Dynamite and took the film world by storm with a wildly successful screening at the Sundance Film Festival. The film made a star out of Jon Heder and grossed more than $46 million worldwide on just a $400,000 budget.

With their followup, 2006’s Nacho Libre, the Hesses scored a big-time movie star for the lead in Jack Black, and landed a solid $32 million budget to tell the tale of a single Mexican man who works in an orphanage yet feels the call of stardom via wrestling. It earned $80 million in the U.S. alone, solidifying the filmmaking couple’s sensibilities as moneymaking in addition to being oddball. Now, three years later, director/co-writer Jared and producer/co-writer Jerusha have returned with their third feature, the truly strange Gentlemen Broncos. The film is their most ambitious yet, with lots of intentionally cheesy special effects squeezed out of its radically smaller $10 million budget. The result—a tale of a young teenage boy who believes his epic sci-fi novel has been stolen for use by one of his writer heroes, and the battle that ensues between them—is a movie that this time might be too strange for a mainstream audience, but based on the Hesses’ track record, could very well gain a cult following for years.

We got a chance to talk to the Hesses’ and two of Gentlemen Bronco’s main stars, Jennifer Coolidge and Mike White (who’s also a writer and wrote Nacho Libre for them) about their childhoods in Utah, graphic sci-fi novels and why their movies come out so skewed.

Adolescence is a time when books take on a lot of importance. Looking back, which books meant a lot to you?

Jared Hess: Probably these Readers Digest books about UFOs that my mom had. When I was a little kid, I thought I wanted to be a special effects guy and work at Industrial Light and Magic, so for Christmas I asked for special effects books, but that didn’t really pan out. It was just some early ideas I had.

Jerusha Hess: My mom would make me read really scary novels like Tess of the D’Urbervilles to try and teach me about sex. I was 8, and they were very disturbing.

Mike White: My second grade teacher was the mom of playwright Sam Shepard. I had a crush on her even though she was very old. I got really into Sam then. I walked around with his play Buried Child in my arms throughout third grade.

Jennifer Coolidge: What a sophisticated group. I don’t think I got beyond Teen Beat and Tiger Beat. I remember this book called The Outsiders with lots of cute boys in it, like one named “Pony.”

What was the inspiration for Gentlemen Broncos?

Jared: Jerusha has a cousin up in Alaska who’s 14 and for a long time he’s been writing really messed-up science fiction and fantasy stories that had his parents worried for awhile.

Jerusha: They’re really graphic. … In other ways, too.

Jared: We don’t really know him, but we thought it would be a fun concept to play with.

I understand the mother role was inspired in large part by Jared’s real-life mother. What was that like, Jennifer, working together to develop that character?

Jennifer: Jared and Jerusha had arranged this luncheon at this very nice restaurant when I got up to Utah. Jared’s mother is really beautiful and glamorous.

Jared: Well, she was for the lunch.

Jennifer: I must say I didn’t capture Jared’s mother for this film. She’s an incredibly creative person. I’m very sad that the most amazing story I’ve heard in a long time, about Ted Bundy, was cut out of the film. His mother went on a couple dates with him—met him at a cheap dance.

Jared: She brought that up after she saw an Unsolved Mysteries about him on Lifetime. She called me emotionally, saying “Jared, I think I took Ted Bundy to a church dance back when I was in college and he was a real weird guy and I just had this strong impression that it was Ted Bundy.” It was also Mike’s favorite scene in the movie.

Mike, last time you partnered with Jared by writing. Now, you’re in front of the camera. What was that like, taking direction?

Mike: It’s always fun to party on Jared’s sets because they’re very relaxed and he’s very funny. But it was hard for me because I tend to have an expressive face, and he kept saying, “Just don’t do anything, don’t do anything,” and I was like, “I’m not doing anything” and he still said, “Too much!” By the end I think I got there—I was just like the walking dead.

Jared: Mike did a real good job with the snake in the film, called Peaches. You bonded with it.

Mike: The snake wasn’t the problem. Jennifer kept freaking out about it. We had to do the poo scene over, it was like food, but it smelled really bad. That was probably the low point of the shoot.

This film has such a distinctive look right from the beginning with the different books. How did you create the different covers, the costumes, the popcorn car?

Jared: We had our costume designer who did a great job. She discovered the Mormon thrift stores in Salt Lake City and her mind was blown—it was where we got a lot of our costumes for Napoleon, too. We shot a lot in a small town called Tooele. Richard Wright was our production designer and he found all the books that were used in the credits, we used their images but changed the book titles to various credits.

Jerusha: With the whole look of our movie, we wanted the sci-fi world to mirror the main kid’s world. He lived in a geodesic dome house, and that’s pretty sci-fi. The clothes, the costumes that Jennifer’s character makes are far-out, too. It lends itself to the whole thing.

Like Benjamin in this film, many individuals have had that experience of having an idea wrongly taken from them. Has that happened to you?

Jared: Not really. It was more wanting to show different interpretations of this kid’s work and what Chevalier would do to it. But I’ve never experienced that.

Mike: I think everything is stolen from me. Just kidding.

The names where Chevalier (played by Flight of the Conchords star Jemaine Clement) wants to introduce every character with a variation of “anous” on it was a highlight.

Jared: We went to film school with this guy named Steve, and anytime that Lord of the Rings came out, he put out a film called Circle of Fire: The Dark Lord, or when X-Men came out he did The Mutants. You should really check him out, he’s done 100 of these movies and his website is called UtahWolfProductions.com. You can buy his stuff, it’s unbelievable. One day I was talking to him, and I asked him how does he come up with all the great character names. And for him, it was all about the suffix: He’d change Nebuchadnezzar to Nebucaronius. He had different theories that if you were going to do a barbarian, use a double “x” on the end.

You really got to go way beyond Napoleon Dynamite with this one, making deer fly and fight.

Jared: That was fun, we called them “battle stags” and it was definitely a different experience but fun bringing them to life as they were an idea I had since childhood.

Jared and Jerusha, what drove you to work together as a married couple? Does that dynamic come into the work?

Jared: I leave that for Mike.

Mike: We wrote Nacho Libre together and I’d get together with them and Jared would show you violent videos he’d watched the day before, Jerusha would say, “Come on guys, let’s get stuff done,” then we’d say, "Let’s get some food" and then we’d share some ideas before taking naps in different rooms. Then every once in a while, magic happens. Jerusha cracks the whip and we’d get 10 pages done on a tear.

A lot of elements in Gentlemen Broncos seemed shot super old-school, even using a VHS tape at one point. Any filming techniques to share?

Jared: Hold it steady. Don’t ever use the backlight button, which I did and I thought we’d have to reshoot it but we just left it all blown out.