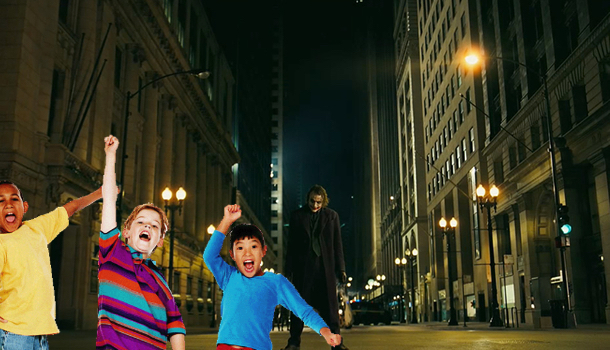 If you’ve ever wanted to experience the real thrill of living in a crime-riddled urban sprawl populated by psychopathic clowns and scarecrows who can bring your worst nightmare to life, offset ever so slightly by the slim chance that you’ll be rescued by Batman, then you’re in luck!

Metropolis will feature Superman staples like the Hall of Justice and the Ace of Clubs, while Gotham City will have villain themed rides and a Joker circus.

Admittedly, creating a giant circus for curious theme park goers just before knocking them all unconscious with poison gas and threatening to blow them all sky high unless Batman unmasks himself in the center ring sure sounds like something the Joker would come up with but, hey, if you’re willing to take your chances, it could be a good time.

And an expensive one, as the parks will be based in Abu Dhabi. So this might only be for the real diehard fans, or people who’ve been aching for an excuse to go check out the United Arab Emirates. So if you go, let us know how it is. Planes dropping from the sky every other day only to be caught by Superman at the last moment? Mr. Freeze turning your theme park adventure into a frozen arctic terrorscape on Wednesdays and Fridays? Or maybe just Superman and Batman, shouting “MARTHA!!” at each other until the credits roll.

The possibilities are endless.

Stop Reducing Your Faith to Hashtags