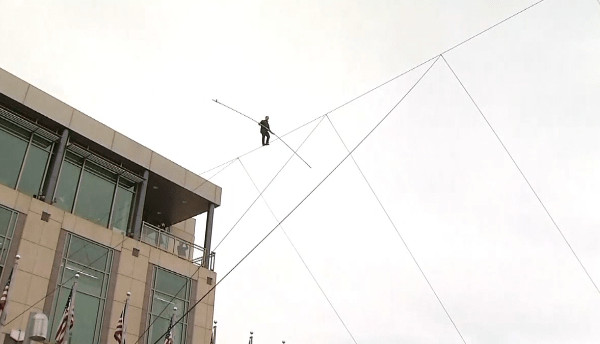 Wednesday morning, Nik Wallenda took a four-minute walk. He walked on a wire 75 feet above the ground over the National Harbor in Maryland, using only a balance bar. It was pretty casual.

Wallenda is preparing for a stunt that will open the Big Apple Circus on March 8. In other words, this was a warm-up. Makes sense: Wallenda holds 10 different world records for his act. In 2015, he walked the longest tightrope ever at the Wisconsin State Fair, and in 2012, he walked across Niagara Falls.

Over the National Harbor this morning, Wallenda stumbled toward the end of his trek, but took a knee to stabilize himself before saying, reportedly, “Just kidding.” Yeesh, Nik. Don’t get cocky.