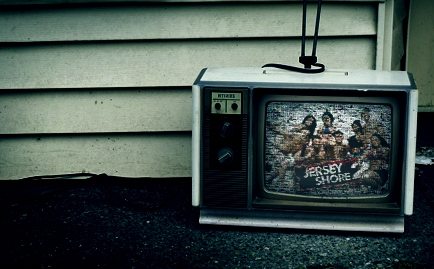 Sometimes I wonder what people from other countries might assume about American life based on today’s most popular television shows. Is it fair to base one’s assumptions about a country upon the television programs it produces? Probably not. Television should not be the barometer for our culture … but then again, in a way, it sort of makes sense.

We’ve probably all drawn conclusions about our parents’ generation based on the popular TV shows from their day. After I watched re-runs of The Andy Griffith Show and I Love Lucy, it was clear they grew up in a time that was a little more modest, more reserved. Life was slower. Blander. Black and white.

Before you start thinking it (because you probably will), I’m really not a prude. I’m not averse to watching something that’s a little edgy or off-color. Two of my favorite television shows are Family Guy and It’s Always Sunny in Philadelphia, neither of which will ever be lauded for its moral fortitude. So maybe, based on my own viewing habits, I have no right to question the merits of, I don’t know, all the programs airing on VH1 or Bravo … but there’s something about our preoccupation with reality TV that just makes me wince.

Before the riot erupts, let me make it clear that I’m not impugning all reality TV. American Idol, Survivor, Dancing with the Stars, Amazing Race and The Biggest Loser all get a pass from me (I don’t watch them, but I understand the appeal).

But an increasing number of reality shows are being devoted to celebrities (again, refer to VH1’s lineup)—including pseudo-celebrities who gain their fame from these reality shows (think The Hills). In other words, they’re famous because they’re famous—but the only thing they ever did to actually earn their fame was show up at a casting call and act ridiculous enough to convince an executive that people would watch their antics.

Even when we don’t watch these shows, the pseudo-celebrities still infiltrate our lives. I’ve never watched Jersey Shore, but for some reason I know who Snooki and “The Situation” are. And why is it that I can name half the cast of The Hills even though I’ve never seen it? (Actually, I blame The Soup and Joel McHale for that.)

What does the success of shows like this say about our willingness to digest whatever garbage is marketed to us? What does it say about us that they can keep coming out with a new edition of the Real Housewives of … Wherever? Do that many of us really care about the lives of these real housewives?

And then there’s TMZ with its crew of paparazzi-journalists, waiting at airports with video cameras hoping to find a celebrity to harass—and then calling these encounters newsworthy. And we actually watch this. Why?

Why is it that the path to stardom for more than one celebrity can begin with the “leaking” of a sex tape—followed by the debut of their new reality show, which people invariably watch.

Speaking of Keeping Up with the Kardashians, do people in other countries wonder who they are and why we’re so concerned with “keeping up” with them? Because I still haven’t figured it out. And why should it be difficult to “keep up” with a group of people who aren’t really doing anything?

Everything I just wrote above, ditto for Paris Hilton and any of her television shows.

For those of you who think I’m just singling out a few of the most atrocious shows on television, I’m actually not. I’m just pointing out some of the atrocious shows that are popular. Otherwise, you can bet I would have mentioned Flavor of Love by now. Or I’m a Celebrity … Get Me Out of Here, For the Love of Ray J, Bad Girls Club or Bret Michael’s Tour Bus Full of Women Searching for a Father Figure and/or Attention (or whatever that spectacle was called).

Even the term “reality TV” has become disconcerting. Because it suggests the events are real or at least realistic. But reality TV isn’t real. And we all know this.

It pretends to be real, and we play along. So when one bachelor emerges from the limo and twenty-some women fall in love with him instantly, we watch and cheer for our favorite, hoping she will “win” the love of her life (along with the corresponding cash prize).

We might even tune in for the extravagance of their televised wedding a couple months after the finale. By the time they’ve separated six months later, we no longer care … because the next season has already started and we’re already consumed by the new faces, new twists, new controversies—and more of the same drama.

We tune in to a lot of different types of reality shows. Some are redemptive (like The Biggest Loser or Extreme Makeover: Home Edition); others manage to be entertaining without being completely sleazy (Survivor or Last Comic Standing, to name two). But many reality shows are just disasters—and that attracts us, too. It’s the same appeal that prompts us to tune in to the early weeks of American Idol just to see all the hacks who are convinced they can sing. Let’s be honest, it’s our interest in disasters that draws us to TMZ, Jersey Shore, The Hills and the destruction of what was once Jon & Kate Plus 8.

Even though I avoid a lot of this stuff, I’m not innocent either.

About a year ago, when the Tiger Woods scandal was still breaking news, I was driving in my car when the guys on the radio started sharing the latest details about his alleged indiscretions. I reached up to change the station … and then I stopped.

Did they just say they were going to play the voicemails he left for one of these women?

Sure enough, that’s exactly what they were about to do. So I reached out my hand again … and turned up the volume. I thought, There’s no way I’m going to miss this!

But when we get immersed in things like the Tiger scandal and reality shows that highlight and glorify our basest instincts (and our narcissism), when we’re infatuated by the intimate details about the lives of celebrities (and pseudo-celebrities), we’re like kids playing in a dumpster. Sure, it might be entertaining. It might be fun. But in the end, we end up covered in filth.

The shows my parents watched might seem bland to me. But I can’t imagine sitting down with my kids (assuming I eventually have some) in 20 years to watch re-runs of Jersey Shore, The Hills or Keeping up with the Kardashians.

I’d much rather be accused of watching something that seems slow than sleazy.

But maybe nothing will have changed between now and then. Maybe our kids will be watching the 35th season of Big Brother. Maybe the Kardashians’ kids will have their own reality show (and our kids will be trying their best to keep up with them). And maybe TMZ will be camping outside the houses of all the newest pseudo-celebrities with their cameras at the ready.

I sure hope not.

Television shows might not be the most accurate portrayal of our society, our culture, our generation. But what we choose to watch—what attracts us—says something. And we already have enough to be ashamed of. Let’s not share that shame with the next generation.

Tyler Charles is a freelance writer living in Delaware, Ohio.