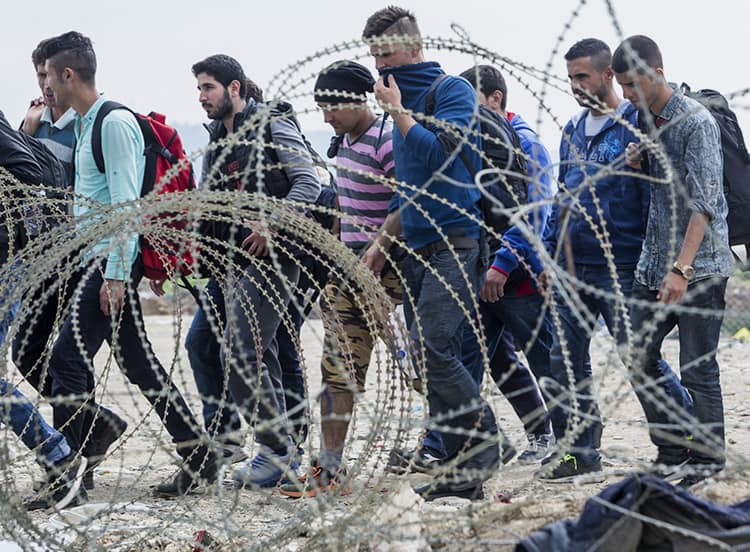 On Sunday, 10 human beings tragically lost their lives in a situation that can only be called desperate. Smuggled across the Mexico-Texas border and into a tractor-trailer in Laredo, as many as 200 men, women, and teenagers found themselves traveling in a dangerously hot enclosure without food or water. The 39 left in the truck when the San Antonio Police Department discovered them were those either dead or injured by heat, asphyxia and dehydration.

I was the only reporter on duty Sunday morning, so it became my story to follow.

On Monday, I met with some student leaders to share with them a reporters’ perspective on education issues and how events becomes a stories.

One of the students had read our coverage of the human trafficking incident, in which we referred to the people in the tractor-trailer as “victims.”

“If what they did was illegal, how come you call them victims?” she asked.

She was sincere in her question. She was seeing the black and white issue that many people see: if someone does something illegal, and that action ends in their harm, they are experiencing the natural consequences of their action.

The logic stands, if the written law is infallible and immutable.

Even when law and morality coincide, it is a misunderstanding to equate the law with morality. Murder is not wrong because it is illegal. It’s morally wrong, and the law of the United States agrees.

In some cases, the law permits what is immoral. There is currently no law against adultery in 29 states. Not with your spouse’s best friend. Not with their sibling. Not if your spouse is terminally ill. Not if you are a serial philanderer. All are totally legal.

However, few believe that adultery is morally superior to fidelity. Few believe it is moral at all, according to a 2013 Gallup poll.

Where we seem to get into a bind is when the law and morality stand in opposition.

When the law requires that you violate a higher moral code, the conversation gets interesting. Immigration, for some is one of these issues.

The student leaders and I discussed this for a while, and the questioning student began what will surly be a very personal process of figuring out her own stance on these issues.

Meanwhile there are plenty of people who have made up their mind on the issue of immigration. Some argue that strict enforcement of immigration laws constitutes an immoral response to those who are suffering in other countries. It violates their moral code to send someone back to a situation where their wellbeing is insecure.

Others see no such conflict. They claim that the law is the moral guide on this one, and that those who break the law are criminals and should be subject to penalty. I meet many of these in the comment section of my stories.

As a Christian, it disturbs me how often those in the second camp equate their Christianity with their “the law is the law,” position.

They somehow suspend their belief in the doctrine of sin when it comes to hospitality and environmental stewardship. Why would we who believe Jesus had to die for our sins think that laws and policies shaped by sinful man are infallible? Surely these Christians know the difference between what is legal and what is moral, considering their unified stance against abortion.

My suspicion is that the way politics and religion have bound themselves to one another for many evangelicals has resulted in an immigration view that is more informed by “their guy in the Governor’s mansion” or their candidate in an election than it is by their Bibles. Last I checked, the Bible was pretty pro-immigrant, and pretty tough on countries that failed to be hospitable.

Still, many Christians shrug their shoulders, with a sympathetic face. “I feel bad for them, I really do,” they say, “But the law is the law.”

From where I sit—which is not as a scholar of the law, but as a reporter of facts— “the law is the law” argument has two fundamental flaws.

First, it has an unreliable source. As St. Mary’s University historian Teresa Van Hoy put it: you don’t get to make the law and then use it justify your position.

“Those of us who have the law on our side do well to consider who makes the law,” Van Hoy said. “Laws have a long history of privileging some at the expense of others. Slavery was once legal. Beating women was once legal. Our own Constitution had to be amended to grant African-Americans and women the right to vote. Legality does not guarantee us a hard-won place on the moral high road. If the moral high road is mapped and paved by those who share our assumptions and secure our privilege, we will need to confirm that our choices are not only legal, but also just.”

The second problem for the “law is the law” argument is consistency.

I would like to mention a few laws that not only legalized immoral things (i.e. slavery, and beating women) but which actually made illegal something that was entirely moral.

In the Jim Crow era, interracial marriage was illegal. A school district, city, or county that did not provide racially segregated schools was illegal. Transportation providers who did not separate the races were illegal.

Now, while few Christians I know would argue that segregation is moral, I don’t know too many who see it as a moral imperative.

If we look to other countries, we see where one culture’s moral imperatives are crimes in another culture.

From 1979 to 2015, Chinese policy prohibited many families from having more than one child. Refusing to sterilize a woman with two children was illegal for doctors in China in the 1980’s.

In Russia, it is currently illegal for Christians to share their faith outside the walls of an organized church, including over email or in their own homes.

Some Christians might oppose the inclusion of Russian and Chinese laws on this list because those governments are not based in Judeo-Christian principles.

We’ll leave behind for a moment that the Christianity of our forefathers looked very different from the Christianity of today’s Religious Right (unless you are ready to talk about slavery, separation of Church and state, the Jefferson Bible, and Benjamin Franklin). Let’s leave that behind for a moment and simply focus on the argument that the laws determine what is moral. If that’s the case, then you can’t use the secularism of a state to declare its laws invalid. If “the law is the law” in America, then “the law is the law” everywhere. If law derives authority from morality, then the immigration question remains open.

Many in some religious camps constantly talk about the impending criminalization of Christianity in the United States. If that extremely unlikely scenario were to happen, would we, Christians, stop worshipping? Stop sharing the gospel? Or would we answer to a higher code?

None of this resolves the immigration debate, really. People have different moral stances on the immigration process, on national identity, on what should qualify someone for asylum, etc.

My point is simply that those who say, “I sympathize with the immigrants, but the law is the law…” need a better argument. Especially those who are Christians.

Democrat Campaign Chief: Abortion Is Not a Litmus Test for Democrat Candidates