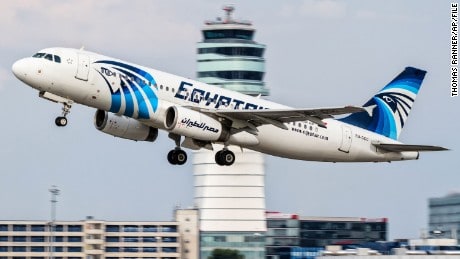 There’s some weird stuff going on with airplanes again. Wednesday evening, EgyptAir tweeted that one of its flights, flight 804, was missing from radar and reportedly crashed into the Mediterranean Sea. The flight was carrying 66 people (56 passengers, seven crew members and three airline security personnel). The plane was flying at 37,000 feet, according to sources, when it made a 90 degree turn to the left and began to drop. After another turn and continued descent, authorities lost track of the plane.

Like most tragedies, news that comes out is usually developing and constantly updating. In this case, EgyptAir confirmed that wreckage from the plane was found—and, an Egyptian civil aviation minister said, it was much more likely that the crash was due to a terror attack than any technical failure. Of course, all kinds of speculation increased, especially because the flight disappeared at its only point of flying above water.

But later, Greek aviation officials stated that the wreckage did not come from a plane.

“Up to now the analysis of the debris indicates that it comes not come from a plane, my Egyptian counterpart also confirmed to me that it was not yet proven that the debris came from the EgyptAir flight when we were last in contact around 1745 GMT.”

Egyptian, Greek and France officials are assisting with the search for wreckage. Here in the United States, President Barack Obama is being given updates as it develops.

This is all pretty mysterious still—and oddly reminiscent of another missing plane: the 2014 Malaysian Airlines flight MH370. In that case, investigators are still searching for remnants of the plane, but the search is set to end in July.

Seeking Validation from Others May Be Ruining Your Life