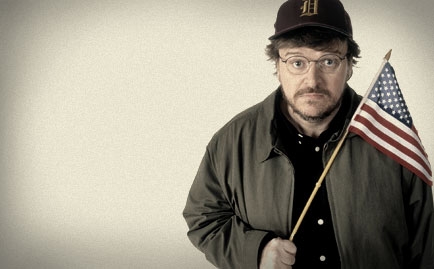 Michael Moore has been redefining the documentary film genre for 20 years now, ever since he exploded on the scene in 1989 with his film Roger & Me, the most financially successful documentary of all time—a record he continued to break with 2002’s Oscar-winning Bowling for Columbine and 2004’s once-in-a-lifetime zeitgeist-making blockbuster (earning $120 million in the U.S. alone) Fahrenheit 9/11.

With 2007’s Sicko, Moore toned down the comedy and backed away from being a constant onscreen presence while stoking the intense debate over health care in America. It proved ahead of its time, earning just $26 million two years before the issues it covered became a constant front-page presence.

But now Moore is back with Capitalism: A Love Story, his whipsmart editing of old news and movie footage creating sharper contrasts than ever with his stark vision of America mired in near-deadly financial crisis. While he claimed this film would be cinematic bomb-throwing, unleashing his righteous anger at bigger targets than ever, its most shocking aspect is actually the fact that the film achieves a greater balance than he’s ever shown before. While he’s appeared to unequivocally support Barack Obama, in this film he saves some of his sternest warnings ever for the president.

Speaking before a packed house of several hundred UCLA students a week before the film’s Sept. 23 opening (limited to NYC and LA before playing everywhere on Oct. 2), Moore engaged in an impassioned Q&A (moderated by fellow liberal icon Arianna Huffington of The Huffington Post) that could make political believers of all stripes sit up and take notice. If this ability to bomb both sides of the political fence signifies a newfound maturity in his work, it’s a welcome change that bodes well for fascinating films to come.

Huffington: I want to start by asking you: what shocked you the most of all the things you’ve discovered?

Moore: I’m not shocked by much anymore. [But] I’m shocked to see the men in charge of our economy are in charge again so soon after they ran it with Clinton. I was shocked to see that airline pilots’ pay and work conditions could be worse than that of someone making bread in a factory. I think there’s been a slow change in the last 30 years so that we barely noticed how far things were going wrong.

Nobody had a credit card when I was a kid. No one had credit card debt. But these big companies and banks wanted to know how to get more money out of people—get them charging things. Then banks gave kids 20-year loans for college. When we were in college we didn’t have 20-year loans. We went to the aid office at college and got it from there, did work study and were not in the hole for the next 20 years from bank. We had pension plans, not 401(k)’s. Under Reagan came the idea of putting your pension plan in the stock market, which wasn’t a guaranteed pension. Those changes come small and incrementally.

AH: You’ve said the movie has a scene made for an audience of one. Who’s that one and what’s the scene?

MM: I put a scene in for Obama, showing how much he got from Goldman Sachs and other big finance companies. I want him to know that we know, and I want him to know that I’m telling everybody else. I want to put him on notice that if he doesn’t do what’s in our best interests, if he takes the side of the banks and investment firms and their organized crime, if he doesn’t side with us and sides with them, the next movie I do will make what I did to Bush look like a Disney movie.

AH: With Obama, he said we’d change direction but he seems to go in the same direction we were going. Businesses and government use fear to manipulate, it seems, no matter who’s in power.

MM: Did anybody think last fall of taking all their money out of ATMs because it may not be there the next day? That’s something about our American media – you don’t find the constant scares in other countries.

Have you ever tried to get a loan and all the personal info you have to put out and proof of what you’re going to do with it? The paperwork the average person has to fill out for a measly $10,000 or $20,000 is ridiculous! Yet for banks to get billions, you had a two-page form with mostly white space on it to get a bailout loan from the Bush and Obama administrations. She’s supposed to be in charge of bailout money, but the Fed has been printing trillions of dollars into the hands of banks and Chrysler.

The money to fund great things and innovations and programs is gone in our lifetime, it’s all gone to debt. So we won’t be able to solve global warming or have the transportation that we needed for the 21st century. We should be supporting people with great ideas but it’s gone, and now it’s gotta be paid back with interest to banks in China.

AH: So where do things go from here?

MM: I think the current system is going to collapse and be done away with regardless of what people with money want. 1 of 8 homes are being foreclosed. That’s one home every 7 ½ seconds. You do that to that many people, there’s a tipping point because eventually people won’t take anymore and when they get screwed, as we see historically, it’s very easy to dupe people with fascism and get them to hate the others.

Capitalism legalizes greed and our laws demand corporations have a fiduciary responsibility to their shareholders to maximize profits. They are legally required to make as much as possible within the code of law. Then they come up with life insurance policies and dead peasant insurance. Fine, it’s not insurance companies’ fault that they deny claims—the law demands that they do that!

You won’t make as much money as possible if you’re doling out money to the sick. You have to find how to deny, and that is a sick system. It’s been 20 years since Roger & Me and I’m just sick of it. The economic system is unfair, unjust, undemocratic. I want you and I to control this economy and to give us a say. It’s not a democracy just to vote every 2 or 4 years, because anthropologists are going to laugh at us someday the way we laugh at those who used leeches in the past.

Capitalism means it’s okay for one guy to grab 9 slices of pie and leave crumbs for others. Capitalism says that’s legal and correct, and we need to scrap it. It’s not capitalism vs. communism. I just want us to go back to the rules created under Jefferson. I was really taught that we’re supposed to share that pie and that it’s harder for a rich man to get into heaven than to pass through the eye of a needle. I don’t support the evils wrought by the institution of Catholicism but I embrace those stories.

How many of you know we pay no FICA taxes if you make over $160,000? We pay 7 percent on all our income. If we ALL had to pay 7 percent we’d have enough money to last ‘til 2087 for Social Security, not 2017, but they don’t tell us the rich don’t pay at all. All we need to do is regulate. Make sure the factories stay open and the kids go to school. But society used to say you can’t regulate child labor, you can’t regulate slavery. But I say we need to regulate capitalism into a form of economy that goes back to democracy and moral ethics. I don’t have a blueprint for what it is but I hope to stimulate others into thinking about it.

The Possibilities of Abortion Reduction

The Mystery of Fathers