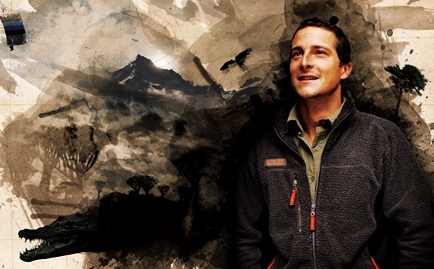 It’s when Bear Grylls starts cracking diarrhea jokes that you know he’s finally gone off script and settled in. The joke comes immediately after a story Grylls tells with the impish delight of a 12-year-old boy, about a time he was scaling a cliff while suffering from food poisoning. “Look out below!” he says, laughing. Apparently that particular take didn’t make it on to Man vs. Wild, though Grylls admits his cameraman got the footage—against his will.

Unexpectedly shy in person, Grylls—the best-selling author, adventurer and star of Discovery Channel’s Man vs. Wild—sticks to his talking points for the first several minutes of our conversation: why it’s important to be prepared, how having a big heart is the key to survival and what makes the show relatable to real life. But then he starts describing the most disgusting foods he’s ever eaten …

“It’s a long list,” Grylls says. “[From] camel stomach intestines to elephant dung to scorpions to snakes to yak eyeballs to goat’s testicles to bear poo.”

And when asked the question on most people’s minds—what in the world drives him to do, and eat, these crazy things?—Grylls’ answer is a simple one, devoid of pride or self-congratulations: “It’s what I love. It’s what I’ve always wanted—I never wanted to be very smart or very rich, I just wanted to follow my dreams and have loads of fun. And I am really lucky that I have a job that involves climbing trees and getting covered in mud.”

Grylls’ childlike nature comes to bear in his faith as well. He uses words and phrases like “home” and “being held” to describe his relationship with God. And when you ask him what it means to be held—what it feels like—his answer is both simple and profound.

When it comes to faith, life and survival, Grylls isn’t one to complicate things. Overthinking, overanalyzing … it’s the stuff that gets you killed.

A wild and simple faith

“I had a very natural faith as a kid,” Grylls says. “As a really young kid, I never questioned God. I just knew God existed and it felt like He was my friend.”

Grylls is not shy about his Christian faith—something he often refers to as the “backbone” in his life. However, he admits believing hasn’t always been as easy as it was when he was a kid. “It’s been a kinda wiggly, messy journey that is still continuing,” Grylls says.

“I remember having one moment when some really good friends turned their back on me in a really nasty way,” Grylls says. “And I remember praying a simple prayer up a tree one evening and saying, ‘God, if you’re like I knew you as a kid, would you be that friend again?’ And it was no more complicated than that. And actually the amazing thing is that all God asks is that we sort of open the door and He’ll do the rest. So often we kinda hide behind our yearning for love and acceptance with loads of complicated theological questions, and actually once that’s stripped away what we really are is just somebody who wants to have that relationship with your Father.”

Grylls says there was something comforting about realizing Jesus wasn’t all about religion—that Jesus was, in fact, “the least religious person you’ll meet.”

“Jesus never said, ‘I’ve come so you can feel smart and proper and smiley and religious,’” Grylls says.  “[Faith] is about finding life and joy and peace. I am not at church a lot because I’m away a lot, so I kind of cling to the simple things, like, ‘I can do all things through Christ who strengthens me’ and ‘I’m holding you by your right hand.’ The simple things is what I try to keep my faith like. Jesus is unchanging and we are forgiven.”

Of course, trying to recapture a childlike faith doesn’t mean simply ignoring all those hard adult questions about God and faith and life. Grylls is an avid supporter of the Alpha Course, a 10-week class meant to give spiritual seekers an opportunity to explore the meaning of life and ask questions about God. “I have seen Alpha touch so many people’s lives,” Grylls says. “I have seen many people find a simple faith through it and I want to encourage it because it’s helped me a load.” Grylls says it’s with Alpha he has brought up some of those lingering questions about God: Do you exist? And if you do exist, are you nice? Do you really care, or are you this big religious person who just wants us to have a nightmare life?

“Sometimes it’s hard for us to believe, really believe, that God cares and wants good things for us and doesn’t just want us to go off and give everything up and become missionaries in Burundi,” Grylls says. “And some people are just scared, and they go, ‘Oh, God just wants me to be religious,’ but actually He just loves us. He just wants us to be with Him, and that’s been a journey to discover that. That’s one of the big questions I asked, was that, you know: ‘If you do exist, are you cozy? Are you what my heart really aches for?’”

For Grylls, there was something about that simplicity—that purity of faith as a child that he longed to return to. “Christianity is not about religion,” Grylls says. “It’s about faith, about being held, about being forgiven. It’s about finding joy and finding home. We all want that, but nobody wants religion. Why do people turn away from faith? They’re not, they’re turning away from religion most of the time. I’ve yet to meet anyone who doesn’t want to be forgiven or held or find peace or joy in their life. We try loads of other stuff—we think booze or foxy women or whatever will fill it—but it doesn’t fill the hole.”

Grylls’ success is certainly extensive. Man vs. Wild is only the most recent in a long line of heroic (albeit, slightly insane), well-publicized adventures. From completing the notoriously brutal French legionnaire training to paragliding over Antarctica to running Class V rapids in the lower Zambezi (sans the raft), Bear Grylls has taken “surviving” to a whole new level—and he’s done much of it for charity and on television. But Grylls isn’t merely a TV personality—he’s an adventurer first, and he earned that title the hard way.

After he climbed Mount Everest (at age 23), Grylls got his first TV break as the star of a “Sure for Men” deodorant commercial featuring the story of his Everest climb. While certainly not the most glamorous of opportunities, it brought Grylls to the attention of the British media and he landed his next job as the face of the UK Ministry of Defense’s anti-drugs television campaign. And that, in turn, led to his first television show, Escape to the Legion. The series followed Grylls and 11 other recruits as they completed the month-long training required to join the French Foreign Legion. The show was a success and Grylls was clearly good for TV. His humor, easygoing nature and regular willingness to defy death made for obvious chemistry behind the camera. It wasn’t long before Discovery Channel approached him for a new show, what would become Man vs. Wild.

His family consists of his wife, Shara, who he met while training to climb Mt. Everest, and his three sons, Jesse, Marmaduke and Huckleberry—the last of which was born this past year on their houseboat.

Grylls admits he hasn’t quite figured out how to reconcile the dangers of his job with the responsibilities of family. “It’s just part of our life together,” he says. “But it’s not easy and I struggle with that. It’s unresolved conflict in my life that I have a lovely family and a risky job. I don’t tell them a load and they don’t see all the shows, so it’s kind of my work and I go and try to be safe and smart about what I do and come home.”

Grylls also points to their shared faith as a critical element in their marriage. “We’ve been married almost 10 years, and that’s been a great glue to our family, actually. I look back now and I think it’d be really hard without that faith together—that sustained us.

“We both lost our dads when we just got married and that kinda brought us closer together—we both really leaned on our faith. It’s the glue to our family. With our kids, we pray together with them and they pray for us and it’s just a kind of great bond that ties us.”

It’s clear from the way he talks about his family—well, really, his life in general—that Grylls is … happy.

“I love these adventures, my family, my faith, my kids. Those are the simple things.”

This article originally appeared in RELEVANT. To read the whole article (and to find out more about Bear’s past adventures and the most disgusting things he’s ever eaten) click here.

Stop Being Trapped in Your Past