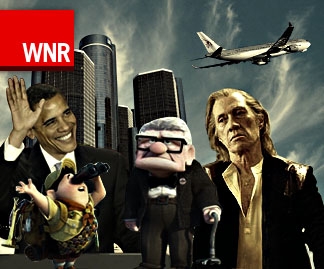 This first week of June 2009 was a sobering one. On Monday, a plane mysteriously disappeared and is still unaccounted for. GM—a bastion of American industry and the entrepreneurial spirit—filed for bankruptcy. A hero of the silver screen was found dead in his hotel room. And President Obama visited a memorial to the victims of one of the 20th century’s most horrific human atrocities. Ah, if only we’d had some balloons to cheer us up …

Very early in the morning, Monday June 1st, Air France flight 447 disappeared over the Atlantic ocean somewhere between Paris and Rio de Janeiro. It appears that the flight went down in the midst of stormy weather and severe turbulence. Although some automated messages were sent indicating electrical troubles, no distress communications were sent from the pilots to air-traffic-control systems or nearby planes, and, according to industry and government officials, they have limited ability to monitor remote ocean areas, and, as a result, it’s likely that very little information was collected that could give clues to how or why the plane went down. At this point, there has been no debris or evidence found from the crash, and each day makes it more difficult to find such evidence as ocean currents take it farther away. A memorial for the 228 people aboard the flight was held in Brazil on Thursday.

Well, the economic downward spiral continues. GM announced this week that it’s filing for Chapter 11 bankruptcy. Not such a rock, after all. However, this isn’t just another in a long line of failed businesses. General Motors constitutes the largest industrial bankruptcy in American history. In other words, it’s a really big deal. President Obama commented on the collapse, saying, “I’m confident that the steps I’m announcing today will mark the end of an old GM and the beginning of a new GM, a new GM that can produce the high-quality, safe, and fuel-efficient cars of tomorrow, that can lead America towards an energy-independent future, and that is once more a symbol of America’s success.”

The Death of a Legend

President Barack Obama joined Holocaust survivor and Nobel Peace Prize laureate Elie Weisel during an emotional visit to the former Nazi concentration camp at Buchenwald, Germany on Friday, June 5. Obama said the visit held a special significance to him as his great-uncle aided in the liberation efforts of the camp in World War II. “These sites have not lose their horror with the passage of time,” Obama says. “This place teaches us that we must be ever vigilant about the spread of evil in our times. … We have to guard against cruelty in ourselves.” The visit comes on the heels of the president’s trip to Egypt on Wednesday when he delivered a key speech calling for bridge-building efforts between the U.S. and Islam.

UP … Just Keeps Going Up

It’s the tale of an old widower, a young boy scout and a flying house pulled by thousands of helium balloons … and it’s captured the imagination of the nation. UP, Pixar’s newest, rose to the top of the box office in its first weekend, bringing in $68.2 million and becoming Pixar’s third biggest opener. Just when it all seems like too much to take, childlike wonder pulls us up again …