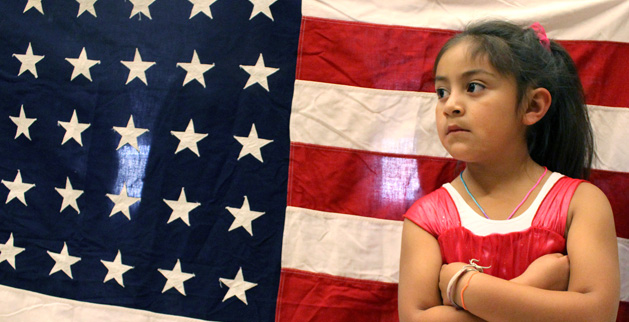 Immigration reform is often a sticky issue, especially in the Church. Last year alone, 724,000 illegal immigrants were caught at the border. While this was the lowest since 1973, it nonetheless represents a vast number of people with a desperate desire to enter the United States. The issue of immigration is highly politicized, with opponents of legalizing those who entered the country illegally saying that the economy cannot sustain the influx of undocumented workers, while proponents say that legalization would increase the government’s net revenue by $65 billion over the next decade.

The issue becomes even more complex, though, for Christians. While many may favor tighter border security and better enforcement of immigration laws, there is also the biblical mandate to care for aliens and strangers within our country. Couple this with Jesus’ assertion that whatever we do to the least of these, we do to Him, and immigration becomes a much more human issue, with concerns that go deeper than political leanings.

In a June 11 press teleconference, faith leaders gathered to discuss the intricacies of immigration reform as they relate to faith. According to the leaders present, the current American immigration policy is not only ineffective at stemming the tide of illegal entry, it puts those trying to come to the United States at risk. Noel Castellanos, CEO of the Christian Community Development Association, described the conditions and dangers faced by people seeking to enter the States, saying: “This past week, 27 undocumented immigrants from El Salvador, Mexico, Guatemala and Ecuador were involved in a rollover accident in a Ford Excursion that killed 8 persons and injured several others in Southern Arizona. A comment by the police was, ‘We see the people stacked like wood frequently. Our immigration policy is killing people, and border enforcement alone is not the answer.’”

Because many impoverished people cannot afford the immigration process through legal means, they end up trying to enter the country in an extremely dangerous fashion. It is estimated that two immigrants each day die in their trek to the border. With the combination of a difficult legal immigration process and lax border security, it is difficult to deter people from attempting the trek in spite of the risks.

“They have come to our cities looking to find a better life for their families, because they know that if they make it into the USA they will be given jobs—jobs that many Americans won’t do,” Castellanos said. “So immigrants come because there are jobs and they will do whatever it takes to support their families, like many of us would do if we were in their situation.”

Castellanos believes that the answer to the problem is threefold. “[First we must have] a pathway for citizenship,” Castellanos said. “The second would be a guest worker program with an adequate number of visas. In addition, make sure there are border protection stipulations in there. The systems we have in place must be enforced this time. I think those three elements are the elements necessary for comprehensive immigration reform. It reconciles the rule of law component with mercy and compassion.”

Beyond increasing security and streamlining the work visa process, Sojourners founder Jim Wallis believes that people of faith have to make compassionate immigration reform a priority. “This is a faith issue. It isn’t just a political issue or a special interest issue,” Wallis said. “It’s a matter of faith for us. The way we treat the stranger is the way we treat Jesus Himself.”

Wallis and Castellanos also target the deportation of illegal immigrants as an area in need of reform. “I recently got a call from a pastor who was asking me for help for one of his undocumented members who had been arrested for a minor traffic violation,” Castellanos said. “He was terrified that he would be deported and his families would be left alone.”

Wallis agreed, saying: “Family values are at stake here. When you’re separating families, you’re getting to the heart of our Christian conviction.”

Moreover, Castellanos believes that the current immigration policy unduly punishes those who entered the country illegally as children. “In one of our local ministries a young woman is suffering under the current immigration system,” he said. “She was brought to the U.S. before her fifth birthday, so in reality she’s much more American than she is Mexican. She is very motivated to succeed, but she has no hope of attending college due to the current laws that require undocumented students to pay out of state tuition in her state. Like thousands of other young men and women in her situation, she is ready to study, ready to work, ready to contribute to our nation and ready to do whatever it takes to become a citizen of our nation, but there is no opportunity to do so.”

Regardless of the political nature of the debate, both the right and left seem to agree that our immigration system is in need of reform. More importantly, people of faith from both ends of the political spectrum can agree that the situation must be handled with compassion. According to Wallis, the root of immigration reform is inextricably tied to faith, and is building a groundswell of unity among Christians of every political ilk. “What you’re hearing is a rising tide of Christian faith saying this is for us. This is something we can’t ignore,” he says. “You see a unity. You see a consensus. You see a movement building. Something is now about to happen.”

Where Am I Wearing Wednesday: Where Is Imported?