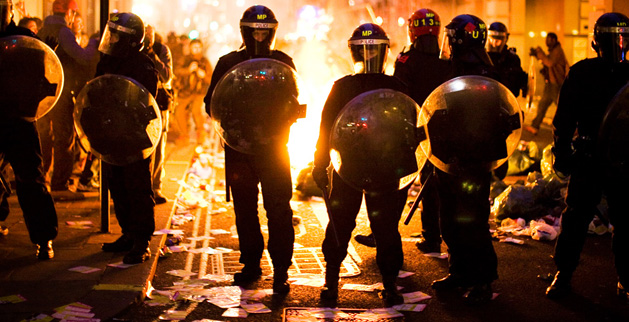 Crowds on the street, burnt out cars, bricks being used as weapons, police in riot gear. Sounds familiar, especially with the year of political unrest that has seen such extremes of reaction against unjust governments. But this was the United Kingdom last week after what started out as a reaction to what a community thought about a recent shooting by police then turned into an opportunity for organized gangs to steal from neighbors, and destroy the streets they walk every day.

I live about 30 minutes outside of London and while I was not affected by any rioting, I watched along with everyone else as the news unfolded. As reports came in and pictures started to appear, it was simply unbelievable to see the blatant destruction and disregard for community and property. London will never be the same again.

While the riots have died down, the war of words continues as politicians, community leaders and the wider communities of the U.K. ask, “Why?”

I don’t live in Tottenham (the area where Mark Duggan was shot), so I don’t know the politics in that area or the feeling of unrest and distrust that exist between the police and the large black community. But if I try to put myself in that situation, then I recognize there’s something in me that agrees with making a stand and fighting against injustice dealt to me or my friends—certainly when a person is shot dead, the details are glossed over and nothing is communicated about what actually happened. In that case, then yeah, I would be angry. But would I riot?

Ever start to look under a rock and find more questions that answers?

There is clearly more than just this one incident that caused the riots last week, and while we shouldn’t just let deaths go left unchecked and unchallenged in our society, there is more going on. We are all feeling the pinch in some way financially. Some have lost jobs and houses, while others can’t afford that third holiday a year they were used to. It has also meant cuts in national and local governments—funding for services that communities rely on to get them through, and some basic fundamental structures like the police.

In the U.K., David Cameron has talked about the “Big Society,” and at first no one knew what this all meant, but what has unfolded is a series of cuts and hope that the third sector (charities, churches, community groups) will bear the burden of those cuts by filling in where local government departments can no longer provide needed community services. Skeptics might say the Big Society is more about budget than building a stronger sense of community locally and nationally; others see this as a massive opportunity.

What I think we saw last week in London and in the other cities in the U.K. was a collective response born out of a lack of hope—hope for anything better than what people are experiencing now. There were some greedy opportunistic people there as well, people caught up in the moment. There are stories of London gangs that normally would be fighting against each other, but they teamed up while the police were occupied elsewhere to steal whatever they could and destroy whatever and, sadly, whoever got in their way.

But a generation of young people are growing up who feel they have no stake in society, so why bother? They have decided, and many voted with their feet. Their actions spoke loudly last week. And again, we ask why? I believe it is how we have communicated to them that life is about the haves and have-mores, and how they’ve been told to think about themselves, get themselves up this ladder or achieve this educational level and these opportunities will be opened up to them. We can’t think like this anymore. Things are not the same and may never be like they were in the good old days.

Whose responsibility is this?

As a parent of a 4-year-old with another baby due in February, I will do my part to speak and demonstrate a better way for my children, but I also believe I have my part to play in speaking into my wider community. Some have blamed parents, others have blamed teachers and others still the politicians. But let’s not talk about blame. We can’t change what happened—it’s done. And now there are young people sitting in prison cells who never thought they would be there but who may have already cast in their lot and lost hope for something  better for themselves, their friends and their family.

My response like a lot of my Christian friends was to pray, our hearts broken for specific situations and the whole nation. Many churches in London and the other affected cities were involved in the clean-up process, in blessing the emergency services, in leading prayer gatherings and continuing to do what they do day in and day out in their local communities.

There are more budget cuts to come and other financial dangers looming. But I firmly believe the Church in the U.K. has an opportunity to shape and implement government policy and to see communities mended and healed—to not just fill in where there are missing gaps, but be part of some foundational work in our health service, education and community needs. We can be and need to be more effective in bringing hope to the nation.

Mark Pape is a Schools and Community worker, and occasional blogger. Living and ministering in Essex where he lives with his wife and 4-year-old son. You can connect with him at http://about.me/messianicomplex

Forget About that Pass to the Holy Land