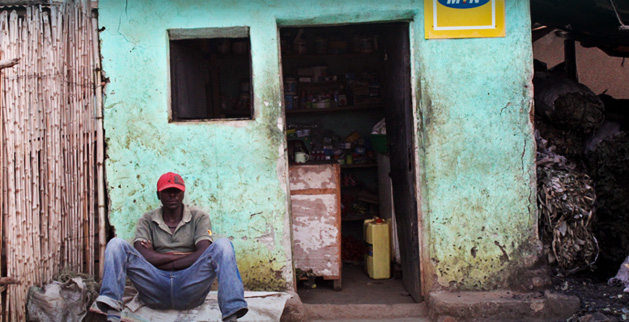 After the violent car accident, society viewed him as an animal. Being paralyzed from the waist down, Hezron Kyando, a 38-year-old Tanzanian, lost his ability to provide for his family in 2002. “I had to crawl everywhere and felt so ashamed,” he says. “I hated myself for the burden I’d become.”

In Tanzania, people with disabilities are seen as less than human, so in Hezron’s case, no employer wanted to hire him. He spent his days lying in the dark, humiliated that his wife had to work to feed their four children. “I wanted to die,” he says, “but this changed when I found Neema.”

As a clothing store, café and paper company, Neema Crafts Centre restores dignity to people with disabilities by training them in craftsmanship and paying them fair wages. Based in Iringa, Tanzania, the organization employs more than 100 disabled workers who would otherwise live as outcasts, struggling for survival. Employees learn how to make everything from elephant dung paper to micro-solar panels, all made out of sustainable materials. After Hezron interviewed, he trained for six months in the center’s weaving workshop, and today, he makes scarves, cushion covers, clothes, hammocks and rugs, which are sold in international markets. “We are full of joy every morning,” Hezron says, describing the life his family now lives.

Andy and Susie Hart, the British couple who co-direct Neema Crafts Centre, admit they never imagined the center would grow to impact so many lives. Although they came to East Africa with ambitions to develop communities and serve the poor, the organization began in 2003 as a small project. “We started in one room with three deaf people and myself, with nothing more than a large sack of elephant dung and a donation of £400,” Susie says.

Because she was born with no ball and socket joint in her left hip, Susie deeply empathized with Africans who were rejected due to disabilities. A local bishop asked her to start working with deaf youth who were not accepted into secondary school, and so she taught them how elephant dung, an abundant resource, could be turned into sustainable paper. With that, Neema Crafts Centre was born.

“It’s all about giving hope to people who have none,” Andy says. He describes how the word “neema” means “grace” in Swahili, and since the center began as an effort to show God’s grace to the broken, the name seemed perfect. Furthermore, he explains there are 14 different noun classes in Swahili, each one serving a different category of nouns. “People with disabilities are in the same noun class as inanimate objects, so the deaf and blind are in the same class as chairs,” he says. And since almost 10 percent of Tanzanians suffer from disabilities, Andy believes this is the kind of pervasive injustice that Isaiah 58 calls believers to fight against, the kind that robs people’s basic rights to life. For this reason, he says three different forms of poverty—material, communal and spiritual—must be addressed.

Andy remembers how people once thought he and Susie were simply trying to profit off the poor. “They would walk by laughing and ask, ‘Can you really make money from crippled people?’ ” he says. He remembers one man in particular who would mock them, but later he realized how beautiful the center’s crafts were and said, “Everyone has gifts from God.” These changes reveal the greater effects the center has on the wider community, Andy says, because now the employees at Neema Crafts Centre and many other people with disabilities can walk the streets with dignity. “Some locals are even jealous of their jobs.”

In thinking about the transformation the center has had throughout Iringa, Andy recalls the story of one small girl. Coming from an indigenous Maasai tribal village, 3-year-old Hanifa suffered from cerebral palsy and had severely emaciated limbs. Her aunt worked at Neema Crafts Center and asked Andy to come to their village to see the girl, but when they arrived, Hanifa’s grandmother said they were wasting their time and no one could help the young girl. “She was so small and shriveled, but I knew therapy would give her strength back.” Andy proceeded to show the family and other tribesman how to do physical therapy with Hanifa, and slowly she improved and regained her muscles. “Now the whole village takes care of her,” Andy says.

Although Neema Crafts Centre has already affected hundreds of lives, Andy believes the work is just beginning. Officials from Nigeria and India have contacted the center requesting Andy and Susie come to speaking arrangements and share God’s heart for poverty. Annie Lennox, from the Eurythmics, also endorsed Neema Crafts Centre, sparking a new wave of interest. Although the leadership of the center will change later this year as another couple from England takes over, Andy says the vision will always remain the same—to show that all people have value and potential in God.

“Dramatic change can happen,” Andy says, “when you give people this hope.”

Confessions of a Former Worship Leader