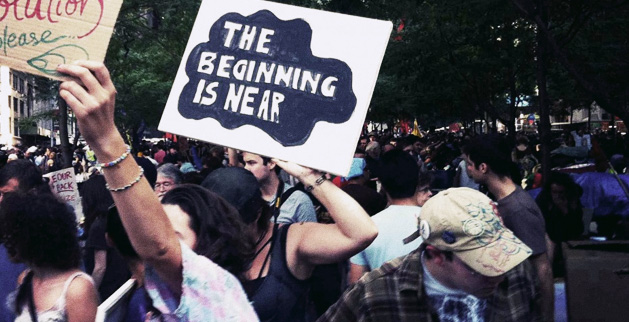 I am not two questions into an interview with an Occupy Kansas City organizer when we are interrupted by a man with a bull horn. It is a crisp, October day, but it’s windy and the statue is the only formidable wind block on a small patch of lawn on Kansas City’s Memorial Hill Park, across the street from the Kansas City branch of the U.S. Federal Reserve Bank.

“Mic check,” everyone (including Evan Harmon, the Occupy KC organizer I’m talking to) shouts in response. So begins a public service address made in pieces, and at each pause, everyone around me repeats what they have just heard.

Chances are you’ve heard of the Occupy movement, but here’s a quick rundown. Occupy began when Adbusters called for a sit-in style protest to confront government corruption by corporate interest. Just days after the demonstrations began on Sept. 17, the occupiers moved to nearby Zuccotti Park (dubbed “Liberty Square” by Occupy Wall Street, or OWS) and hundreds hunkered down in tents and gear to occupy ‘round the clock. Though the Occupy movement at first attracted only minimal coverage from the news media, by Oct. 9 the it had spread to more than 70 cities in the United States. By Oct. 15, not even a month after the initial occupation of Wall Street, the Occupy movement had joined the Global Change movement and similar protests in 951 cities in 82 countries. If this reminds you even a little bit of Tahrir Square in Cairo, it should: Occupy points to the Arab Spring as its headwaters, and fully intends to bring things to a head with the American Fall.

The official OWS site explains that OWS “is [a] leaderless resistance movement with people of many colors, genders and political persuasions. The one thing we all have in common is that We Are The 99% that will no longer tolerate the greed and corruption of the 1%.” They mean the upper tier of America, just 1% deep, that controls as much as 40% of the nation’s wealth.

“The 99% thing, it’s no joke,” Harmon says. For him, the gritty democracy of Occupy’s general assemblies supersedes any political action he has taken before, and is far more satisfying. “I may feel passionately about something and someone else may feel just as passionate but completely opposite, so we have to continually ask ourselves what is it that brings us all here? It’s a continuing, messy, sometimes confusing debate.”

I find Harmon intelligent and inspiring, but he’s not leading this thing—no one is. Would I rather be talking to an organizer in Zuccotti Park? Maybe, but “decentralized” doesn’t begin to describe the Occupy movement which seems to me a gangly tangle of issues that magically coalesces around a confession of faith: we are the 99%.

My best bet is to talk with  Tyler Crane, the guy who developed the Occupy KC Facebook page. When I get the chance to sit down with Crane, one of the first things I ask him is how real the 99% concept really is, citing that even the 99% in America represents the 1% of the wealthiest people of the world. “America is not as glorious as we are led to believe; there are poor people here too,” he says. “There are tent cities in L.A. that are as poor as the barrios and favelas in Brazil.”

Crane also doesn’t see a concern regarding the fact that the United States, according to the CIA World Fact Book, is more than 75 percent Christian. “If we are going to come together as the 99%, Christians are going to have to back-burner their Christianity to come together with the rest of human beings. We’re here because we’re all fed up with the way the system works, not with the way religion functions in our society. It’s about uniting us under the banner that we all have been oppressed, whether we’ve had our mortgage foreclosed on or whether you’ve [been the victim of police brutality]. Christians suffer the same way. Their belief in Christ doesn’t make them immune to these issues.”

Crane is certainly right, but what strikes me is that Christians are already part of a movement, though maybe we have lost sight of this through centuries of dogma and hyper-institutionalization. But even the Church, with its history of violence and a continual struggle to stay true to its Founder, is at least a little positive. Christ’s revolution “took,” lasted, changed the world, and even inspired and influenced the secular movements that later gave the world democracy. In fact, His was the first revolution that demanded downward mobility, poverty of spirit and a solidarity with the poor that served, rather than exploited, those in need.

To back-burner Jesus is to jump ship of an even bigger revolution, one that has expanded its global reach so wide that we can hardly see the edges anymore. The Jesus movement is the most successful revolution in history. Christ’s towering stature has occupied the western world ever since Golgotha. He’s no joke.

The whoop of an alarm breaks the serenity of Memorial Park. I turn to see a big red  fire engine turn into the parking lot followed by an ambulance. A woman no one seems to know is sitting on the ground with her head in her hands. A few other Occupiers are beginning to gather around her.

“I don’t know. She had a freak out I guess,” says Monroe, a believer I met down here who feels like God is asking him to stand with the poor. Jeremy and Jenny saunter over and asked us what is happening. Yet another man, in his fifties, offers the information that she had vomited about a dozen times earlier today. “I heard her say she hadn’t been taking her meds.” More details emerge. The woman is one of the homeless drifters who have been occupying this park long before Occupy KC. Earlier, she was shouting at a volunteer who didn’t follow through on a commitment. Now, she has collapsed in a heap and is barely able to respond to those around her.

I see 10 or 15 people all gathered around this one person in need, and I know exactly where they got that idea.

Win a Copy of Green Lantern!

Ripples of Hope in South Africa