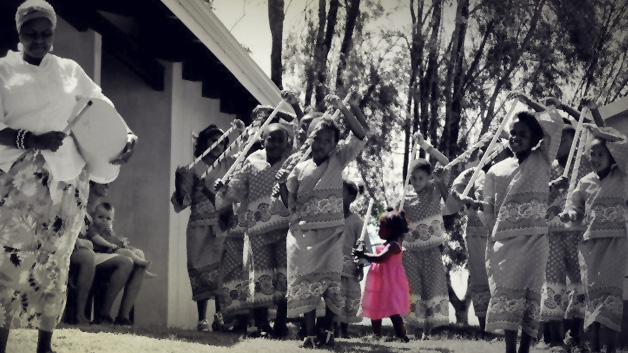 Ten years ago, Joan Smith started to take peanut butter sandwiches to some of the hungry children of Amaoti, the largest informal settlement in Kwa-Zulu Natal, on the eastern coast of South Africa. More than 13,000 households live there, and the hillside is populated by colourful shacks made from plastics, scrap metal and mud, densely nestled cheek to cheek. Many have only one room and house entire families. They are mostly bare, containing a few, cherished possessions—old calendars and newer posters on the walls, a few pots and pans, a mat on the floor. No mattresses, no cooking facilities (as we conceive of “kitchens” in the West), nowhere private to wash, no toilet.

South Africa is home to some very poor communities. Eighteen percent of the population is now HIV-positive—adding up to 5.5 million people—and nearly 3.3 million children have become orphans as a result of this pandemic. Social services cannot cope with this orphan crisis, and the government does not know how to respond. Yet Joan, and her husband, Tich, are embodying hope, possibility and second chances.

At first, they simply carried peanut butter sandwiches. Yet from these humble beginnings grew a nonprofit called Lungisani Indlela (translated “Prepare the Way”), which incorporates a back-to-school program, a feeding program, holiday clubs, a young leaders empowerment project, crisis support for families and 27 crèches. Tich and Joan had become unsung heroes in this oft-forgotten community.

Only a few years earlier, Tich was living a successful, hedonistic lifestyle, miles away from the poverty and need of Amaoti. He was a successful, rich, professional sportsman, representing South Africa as wicket keeper on their national cricket team. However, his addictions controlled him. At 35, his sporting career had ended, his marriage was over, his earnings were spent and his debts were overwhelming. “Success” on the sports field had brought him only pain and loss. Admitting defeat—which is difficult for a professional sportsman—Tich entered rehab. He found salvation and discovered a reason to live again.

Joan’s path to Tich and Lungisani Indlela was also fraught with tragedy. In 1990, her life was turned upside down when her husband was killed in a township. A few years later, she met and married Tich, and began her regular sandwich voyages to the hungry children in the township of Amaoti.

Tich and Joan shared a dream: to bring transformation and empowerment to the hungry children of Amaoti. Now they have an even bigger dream, and this one is coming to life on another hillside, not far from Amaoti: Tich and Joan are building a village for orphans.

Last year, the first children and house-mothers moved onto the first Lungisani Indlela Village (translated “the right way”) near Amaoti. Thirty-five children are now settled there, with more arriving daily. By the end of 2012, 80 homes will be completed, each filled with new, “blended families.”

Tich and Joan—unable to think small—are hoping to launch a second village soon in Johannesburg. They are opening factories to provide employment for locals and generate income. They recently purchased the farm next door to the LIV Village, with funding arriving miraculously at the 11th hour. The lives of thousands, of orphaned children are going to change in South Africa. Many already have.

One such person whose life was touched was Busi, who was 17 years old when she became pregnant. Her daughter was born and she went back to school, determined to complete her education and provide for her child. She passed all her exams and was given a place to study journalism at university. Her dream was becoming a reality.

On the way to university, Busi was killed in a car crash. Bongi, now an orphan, came to the attention of Lungisani Indlela and was sponsored through their back-to-school program. She studied tenaciously at school, determined to one day become a journalist herself.

Last December, Bongi graduated from school with six distinctions and was recently awarded a full scholarship to study journalism at university. Hope beyond hope has become real for Bongi. The back-to-school program, she says, “saved my life. It gave me hope again.”

In the coming years, many more stories of hope beyond hope will overflow from this village. The lives of South Africa’s future teachers, future doctors, future leaders, future mothers and fathers, are being transformed. Tich and Joan’s dream—to build a village for these orphans, to give them a home, a hope, a second chance—is allowing these children to dream about their future. Dream and eat peanut butter sandwiches.

The Truth About Disney Love