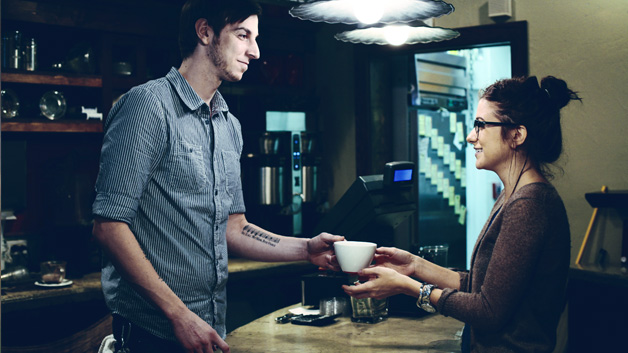 Sometimes we are faced with having to answer the hard questions about ourselves. What are our intentions? What is our agenda? It’s humbling to realize that somewhere along the path, we may have gotten off track. What’s even harder is when it’s not even a “bad” path, but rather one filled with good intentions. This was my recent experience.

When I was 19, I took off to explore the world. I trained and traveled as a missionary, led creative arts missions teams to faraway places, ate some crazy food and ministered to all sorts of people around the globe. I met my now-husband, we married and settled in Grand Junction, Colo., where I began working as a youth coach. It was a transition from the previous adventurous years, but I could still see that my work was making progress in the lives of at-risk kids in the area. Over time, I moved on to an even better suited job as a staff member with the nonprofit Light Gives Heat. LGH empowers women in Uganda through fashion by providing jobs where there once was none. Being able to use my creativity to practically change lives on the other side of the world was incredibly fulfilling, and I was in it for the long haul.

After nearly two years with LGH, the point in time arrived where I had to cling to the fact that God knew my future and needs far better than I did myself. My husband was given a career opportunity in Nashville, Tenn., and after much prayer, we decided that a move was in store for us. It was decided that I would set up a remote office in Tennessee, however just a week before our departure, I could sense God had another plan in mind. I couldn’t escape the voice of the Lord telling me it was time to resign and start anew. I struggled with this idea, as it meant taking a huge risk. I was giving up a dream job with no guarantees of finding another.

I had high hopes of finding a bigger and better job shortly after moving. Naturally I thought that is what happens—you only move up, not down. I eventually found work, but at a high-end boutique. On its own, working at a clothing store is great. It’s fun and mostly stress-free, but it wasn’t what I envisioned for myself. “How am I changing the world by selling clothing?” was a question that plagued my mind. After spending years and years on the front lines, it was hard for me to see how a “normal” job could be a valuable response to the hurting world around me. Why would God have led me here after all those years of training and growth?

Somewhere, somehow, along the road, I had crossed that fine line and altered my thoughts on what it means to bring change. An official occupation of “world changer” is not the only way sustainable change is ignited. Yes, it feels validating and looks glamorous, but it doesn’t mean it is. It’s about living out of what we have and where God has us. Some are called to roam the world, some to start incredible, self-sacrificial organizations and some are called to love the homeless man along their street. It all looks different, but each person has a part to play, and no part is better than the other. When is becomes about seeking praise, it is time to reexamine our hearts.

There is a wide variety of influential organizations and groups taking action right now. When circumstances or opportunities do not allow you to partner with groups such as these, it is easy to feel that what you contribute to society is simple or small. However, that feeling does not mean that the effect you have is small or simple. What good are the complexities if we have forgotten the basic understanding of loving one another and putting others before ourselves? Do not fall into the trap of comparing yourself to others, especially those who have the spotlight; reach out to those around you, wherever you are, and you will start to see your impact.

When my mind began to wrap around the freshly renewed understanding of social responsibility, I began to brainstorm a list of ways I could lift up the community around me. I grew more and more excited about a number of local opportunities, but the action of hospitality stood out the most. To invite one into your own home, the safest space in your world, is to become truly vulnerable. It strips you of the distraction of the trendiness of the social movement and revisits the foundation of truly serving others. It is here that you can demonstrate acceptance and care toward others. No matter where we are in life, whether working a 9-to-5 job or fighting for human rights, we all can empower and encourage someone’s life over a meal.

Genuine faithfulness to better our world requires commitment at all levels. If you choose to ignore the possibilities around you, how then will you rise to a task of greater expense? Opportunities to make our world a better place are everywhere, you just need to tune your eyes to see them, then step out.

Kate Wise lives in Nashville, TN with her husband, Dustin. She blogs at FromTheGuestRoom.com.

Who Are the Worst Tourists? We Are