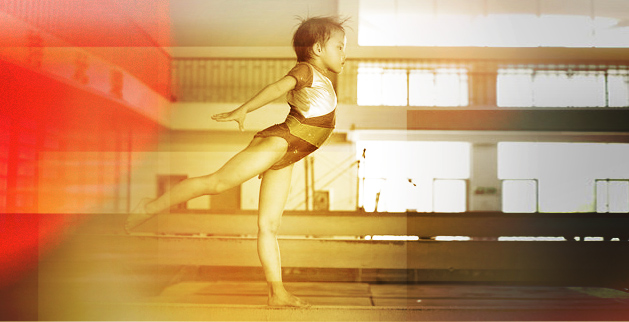 When most children are stacking blocks, riding tricycles, and blowing bubbles, Dominique Moceanu was in the gym training for a future gymnastics career. By the age of ten, she was a gold medal winner.

After countless hours training in the gym and striving for the pixie physique of a small girl, the young Olympian Moceanu was forced by trainers onto a scale in front of her entire gymnastics team to be shamed. Her crime? Weighing 70 pounds.

Mary Lou Retton, beloved USA gymnastics darling of the 1980s, was the first American woman to win an all-around Olympic gold medal in 1984.  One year after her gold medal winning performance, a top American official reprimanded Retton, “You know, if I could, I’d take half a point off just because of that fat hanging off your butt.” Womanhood had sneaked up on Retton, and the curves that had arrived with it were unwelcome in her profession.

Shawn Johnson, 2008 Olympic balance beam gold medalist, felt the brunt of the weight guards wielding the power of the scoreboard as well as brutality of message-board fans on the keyboard.  The constant comparison between her short, stocky body type and her competitor’s, the lithe dancer Nastia Liukin, arguably contributed to her 2008 Olympic marginal loss to Liukin. The maelstrom of criticism in the years following Beijing brought Johnson to subsequently to drop 25 pounds from her already tiny 4-foot-9 body.

Gymnastics, and other sports such as ballet, swimming and diving, figure skating and distance running are some of the sports where low body weight and an extremely lean physique are expected and applauded. In elite sports where the body and its feats are central, the line between impeccable standards and abuse is often blurred. When athletes are subjected to unjust treatment, the physical harm it poses to themselves, and international observers whose standard of fitness is formed by the figures they see on the screen, becomes a violation of health and human dignity.

Suzanne Yoculan knows where to draw a firm line. A coach to several Olympic gymnasts as well as national teams, Yoculan believes the combination of sports requiring exacting precision and a coach putting high pressure on unrealistic bodily shape is unwise. “You can be healthy, you can eat well, and you can still be a successful athlete,” says Yoculan in Joan Ryan’s exposé on women’s gymnastics, “Pretty Girls in Little Boxes” (PGLB).  “You can have breasts and hips and do the same level of gymnastics. College gymnasts need to be televised. The general public is not seeing college-age women on television, so they’re only associating gymnastics with 80 pounds and 4-foot-8.”

Yoculan has made it her personal policy to never comment on her gymnasts’ weight and body size. To her, emphasis on performance and not weight is integral in the pursuit of a healthy athlete. It is reasonable to assume that if a woman can run 82 feet at maximum speed down a runway, throw herself onto a padded table and propel into the air performing multiple flips before landing, that she is in good physical shape. If an athlete is able to perform to a satisfactory level, her weight should not be unfairly scrutinized. Her coach should not force her into methods of physical abuse.

As the number of top-level female athletes rise, concerned researchers are beginning to take note.  The term “female athlete triad” has come to the forefront as many female athletes suffer from the trifecta of disease their sport brings upon them: disordered eating, menstrual disturbances/amenorrhea (lack of periods), and bone loss/osteoporosis.

The Female Athlete Triad Coalition has been vocal in educating athletes and parents on the deleterious effects of overtraining and overemphasis on bodily perfection in athletes. The Coalition cites common signs and symptoms of the Triad being irregular or absent menstrual cycles, constant fatigue, sleep problems, recurrent injuries like stress fractures, food intake restriction and constantly striving to be thin.

The energy elite-level athletes need to perform is astronomical. This energy is provided mostly through excellent and adequate nutrition. But with the pressure from coaches and outright shame tactics, most female athletes often succumb in the vulnerable teen years to unhealthy standards. Avoiding perceived failure at any cost, the athlete will often subsist on little food while over-training and over-exercising. Sacrificing energy, safety, and even future health and wellbeing for the acceptance of coaches and peers and ultimately judges’ favor sadly becomes the norm.

Many sports are culpable, but gymnastics especially seems to be fertile ground for the infamous triad to grow. A leading example is Christy Henrich, a top American gymnast in the 1980s. Henrich began a fatal battle with anorexia nervosa after receiving a comment by a U.S. judge that she was fat and needed to lose weight to make the Olympic team. She rapidly shed weight from her already-tiny frame, but still failed to make the 1988 Olympics. Crushed by the loss of her Olympic dream, Henrich began a steady decline into severe anorexia that ultimately ended in her death in 1994.

Henrich’s example brings stark reality to the discussion. “The point becomes,” said Yoculan in PGLB, “is it a problem? Does it need to be treated? …When [an athlete’s] obsessive-compulsive nature controls [her] life, that’s when it needs to be treated.”

Yoculan is on the right track as she educates coaches and parents—who are in the front lines of both protecting and pressuring young athletes—to be aware of the negative consequences of obsessing over body size. Although gymnastics admittedly is a sport that requires absolute precision and control through the vehicle of the body, coaches and parents must be in tune to their young athlete’s vulnerabilities to the pressure of perfection and coach accordingly.

Athletes must not only be valued for their ability to perform, but firstly for their inherent value as people. Let us never forget that in our quest for dominance in the Olympic arena.

Beth Hall is a freelance writer in the San Francisco Bay Area. She makes her home with her husband and soon-to-be five children. She can be contacted at [email protected].
0 Comments
RELEVANT August 3, 2012
Share
Tweet
Share
TRENDING ARTICLES