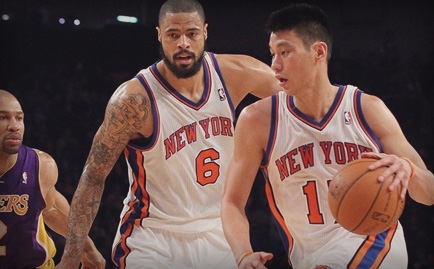 How the basketball star and outspoken Christian has set the stage for a vital discussion about racial reconciliation.

New York vs. Miami. Last night’s match-up was supposed to be a game that would make or break Jeremy Lin. It had all the pieces for an epic David vs. Goliath story: the best villains the NBA could conjure, the glitz and glamour that comes with an All-Star weekend, even LeBron James’ receding hair line. But after scoring eight points and committing eight turnovers, this game was just another tough learning experience for Jeremy Lin—and a fitting metaphor for the conversation that was sparked by the “Humble Hero from Harvard.”

Lin’s road ahead will be paved with wins and losses (like last night’s 102-88 defeat), and only time will tell if his sudden NBA stardom is a fleeting moment or a lasting career. But for better or for worse, Lin has became a symbol within the current conversation surrounding race in America. What started as the boyish, charming story of the rise of a basketball phenom with a vocal Christian faith took a cynical turn after Floyd Mayweather pulled the race card and ESPN threw in a slur for good measure. Fortunately, the symbolism hasn’t been wasted; rather, it has turned into a fascinating conversation about the need for forgiveness and humility.

I’d imagine that like nearly every other Asian-American I know, some friend has tried to convince Jeremy Lin that A Christmas Story is a good movie. I’m sure there are good reasons as to why it appears on nearly every must-see/top 10 Christmas movie list. But like so many others, I completely lose all of my patience for it when the family goes to the Chinese restaurant. I’ve tried to persevere; I’ve tried to get to what I suspect is a happy ending. But I can never seem to get past that point of the film because it takes me back to the place where Asian-Americans like myself are portrayed as ignorant and primitive people.

Thankfully, Asian-Americans have come a long way from the caricatures we used to play. Hollywood has transitioned from offering us emasculating, nerdy, tech-support walk-on parts to strong and more complex leading Asian roles. (Granted, they sometimes end up looking like modern-day samurais, but at least it’s a step in the right direction).

Simply put, Asian-Americans now stand in a unique place within the race conversation in the United States. We are considered to be an elite minority. Elite because the racial stereotypes presented tend be mostly positive: Asian-Americans are good at math, play musical instruments, have survived tiger mothers—and now, might even be good at basketball. Sure, we don’t drive as well as some people, but that’s because our eyelids are more narrow, right?

What happened at ESPN was inevitable. Someone was going to make a “chink” comment. But after ESPN attempted to make amends for their gaffe by firing one employee and suspending another, two of their commentators had one of the best conversations I have heard about race in a long time. Stephen A. Smith and Skip Bayless went on the air to address their frustration with the very nature of the conversation. Unlike the hilarious SNL skit that used clever Jeremy Lin puns to slyly comment on the undefined, lopsided race conversation in this country, Smith and Bayless risked their public profiles and said something of real substance.

Smith outlined the need to be more careful about how minority groups respond to racially charged situations as there is currently a bad precedent set by groups that
over-respond to genuine mistakes. And Bayless added we all have to be more mindful that we have entered a new chapter in American history, where every ethic group can feel marginalized, including those who have been historically identified as the oppressors.

As this back-and-forth took place, it was almost as if the two were simply reciting lines from the book of Proverbs or pulling on New Testament language of forgiveness and humility. It was almost as if the practical wisdom offered in holy Scripture was being uttered as a worthy guide for what it means to live into the image we were created to be.

It was a conversation handled with the incredible poise Lin himself is becoming synonymous with.

Jeremy Lin’s public profile has certainly blossomed in the past few weeks. He was even offered a GQ magazine cover—Lin turned down the opportunity because he felt it would be a distraction from his team. And this was by no means the first time he made such a gesture.

In a video clip of Lin sharing his testimony with a Chinese Church, he described all the things that needed to happen for him to have a shot at playing for the Knicks. He broke down the elements he had no control over and confessed that every part was a gift from God.

In an interview after he played the Lakers, he was asked, “What were your nerves like at the start of the game?”

Lin responded: “The same as every game … I play as hard as I can. I try to do everything I can to help my team win. And I play unto God. That’s it.”

Later in the same interview, he was asked, “Can you describe what your family’s reaction has been to all of this this past week and seeing you on the back page of [New York Post]?”

He said: “We are just thankful. The journey was very different. It’s been tough at times and my family has been through a lot … just the last year and a half, the downs we had to go through, but God is faithful and He put us on this unbelievable journey. We are just trying to enjoy everything right now. We are trying to stay together and make sure we handle everything the right way.”

It is clear that for Lin, humility and forgiveness have defined his faith. Maybe that’s the lesson we should take away from all of this. If we are going to make any progress with the tensions between differing races and cultures, then minorities need to be more forgiving. Because, as Lin has said, “you can rise as quickly as you can fall.” And we need to be more gracious in the way we handle the inexperience of others—even if that means eventually watching A Christmas Story all the way to the end.

Christopher Esposito-Bernard is the Dir. for Children, Youth & Family Ministries at All Angels’ Church in New York City. Although his name doesn’t show it, he’s an Asian-American whose mother immigrated to this country from South Korea.

Behind The Academy Awards