Shocking and disturbing cell phone footage has emerged from Minneapolis, Minnesota, showing eight minutes of a white police officer crushing a black man’s neck with his knee, refusing to listen to the man’s pleas that he couldn’t breathe and ignoring the cries of onlookers begging him to stop. The man becomes unresponsive and was later pronounced dead at Hennepin County Medical Center.

The man was identified by a family attorney as George Floyd, and can be heard in the video saying “Please, please, I can’t breathe. Please, man, please.”

“I can’t breathe,” Floyd begs, to no avail. Around the officers, others can be heard telling the officer to get off of him and saying that he wasn’t resisting. The man can be heard crying out for his mother.

“He’s fine,” one officer responds. When Floyd stops moving, one onlooker says “He’s not responsive right now” and moves forward as if to help, but another police officer pulls out a can of mace.

“Does he have a pulse?” asks another onlooker. “Check his pulse!”

Police do not immediately provide any assistance and paramedics arrive shortly thereafter.

You can watch the video here but please be warned, it is very graphic.

Benjamin Crump, the family attorney, said Floyd’s death is part of a tragic cycle in the U.S.

“We all watched the horrific death of George Floyd on video as witnesses begged the police officer to take him into the police car and get off his neck. This abusive, excessive and inhumane use of force cost the life of a man who was being detained by the police for questioning about a non-violence charge,” he said in a statement. “… How may “while black” deaths will it take until the racial profiling and undervaluing of black lives by police finally ends?” 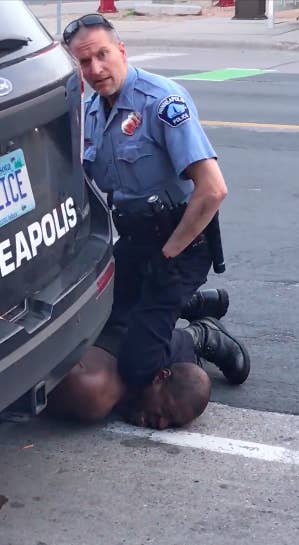 Minneapolis Mayor Jacob Frey held a press conference in which he said that the officer “failed in the most basic human sense.”

“Being black in America should not be a death sentence,” Frey said. “For five minutes, we watched as a white officer pressed his knee into the neck of a black man. For five minutes. When you hear someone calling for help, you are supposed to help.”

According to Buzzfeed News, Floyd had recently moved to Minneapolis and worked as a security guard at a local homeless shelter, where he was fondly known as “Big Floyd.”

“He gave us hugs, and told us it was going to be OK, he told us we could make it,” one of his friends told Buzzfeed. “He was such a big brother to me.”