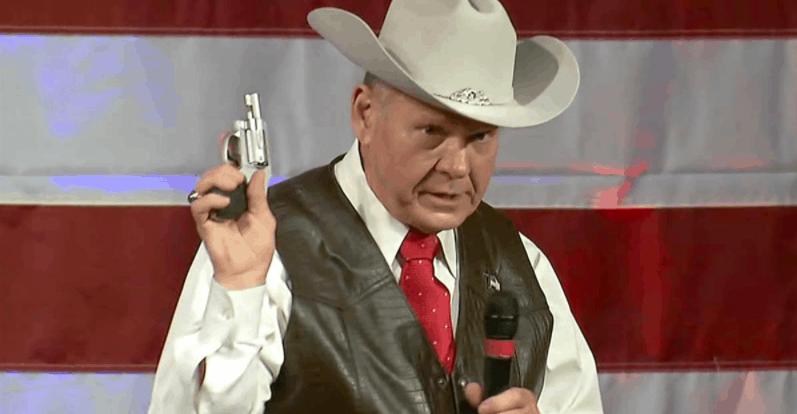 There is no shortage of truly horrendous defenses being mounted for Roy Moore, the Alabama Senate GOP nominee who has been accused of inappropriate conduct with five young women, including molesting a girl when she was 14 years old. But an early frontrunner for the worst defense has come from Alabama state auditor Jim Ziegler, who is using the Bible to defend the indefensible.

After a string of half-hearted excuses offered to The Washington Examiner, including saying that Moore never had “intercourse” with any of the girls and that it all happened “40 years ago,” Ziegler moved on to a defense so abhorrent it’ll make your teeth fall out to read it:

Take the Bible. Zachariah and Elizabeth for instance. Zachariah was extremely old to marry Elizabeth and they became the parents of John the Baptist,” Ziegler said choosing his words carefully before invoking Christ. “Also take Joseph and Mary. Mary was a teenager and Joseph was an adult carpenter. They became parents of Jesus.

There is no need to mount a serious counter attack on this reasoning, since it’s so despicable on its face. But it is worth noting that Zachariah and Elizabeth were both old when they were married, so this analogy does not apply in any sense. And Mary was a teenager when she had Jesus—a teenager who was rather famously a virgin.

This what can come of getting so caught up in defending your “team” that you can’t see straight. As a future gut check for all of us, if you find yourself invoking the birth of Christ as a way to defend an alleged child molester, something has gone seriously off in your soul.

Report: 5 Christian Families in Pakistan Have Fled Their Homes After One Member Was Accused of Blaspheming Against Islam