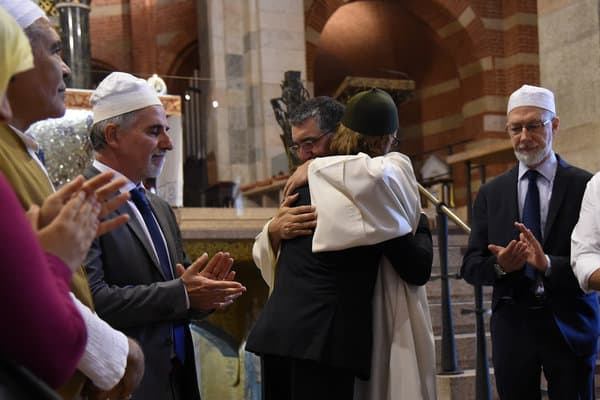 Yesterday, something truly awesome happened in France. Across the country, Muslims gathered for Catholic mass services in churches and cathedrals. Yes, you read that correctly. Muslims met in Catholic churches. They were gathering to demonstrate solidarity following last week’s brutal killing of an elderly priest at the hands of ISIS.

Today we wanted to show physically, by kissing the family of Jacques Hamel, by kissing His Grace Lebrun in front of everybody, so they know that the two communities are united.

During the same attack in which the preist was kill, several nuns were taken hostage. The Associated Press reported an account of one of the nuns actually hugging the Muslim attendees at her mass.

In Paris, according to the Huffington Post, a group of Muslims held a banner outside of a service with, “Love for all. Hate for none” written across it.

The HuffPo article includes photos from the weekend. And, honestly, they’re pretty moving.

Why Does Wisconsin Want to Punish the Two Girls Suspected in the ‘Slender Man’ Stabbing as Adults?