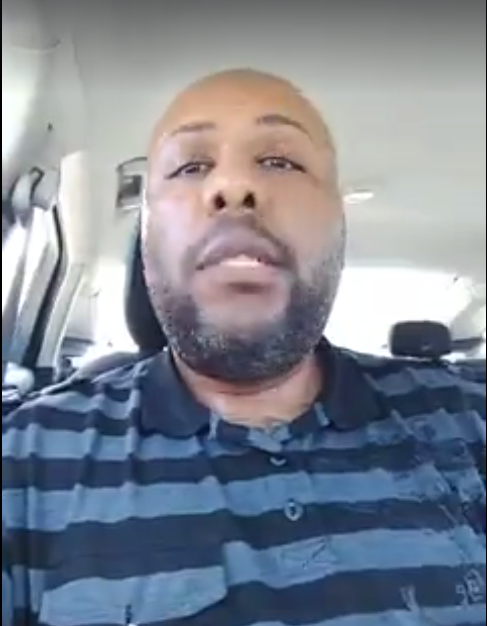 Cleveland police are out in full force to find Steve Stephens, a man who claims to have killed multiple people. So far, police have only been able to identify one victim, 74-year-old Robert Godwin Sr., who Stephens shot and killed before uploading video of the murder to Facebook. So far, the killing appears to have been entirely random.

In the video, Stephens says he’s “killed 13, so I’m working on 14 as we speak.” He alludes to having “snapped” and references being motivated by relationship troubles.

Police say Stephens is in a white Ford Fusion and are urging anyone with any information to call 911. Stephens is considered armed and dangerous. “We want this to end with as much peace as we can bring to this right now,” Cleveland Police Chief Calvin Williams said at a press conference. “We want him to turn himself in. If that doesn’t happen, we have all of our partners here on this. We’ll look until we find him.”

Police also said that Stephens may not even be in Ohio anymore, and cautioned residents of New York, Pennsylvania, Michigan and Indiana to remain on the look out.

CNN reported Robert Godwin Sr. was killed by Stephens while walking home from an Easter meal. He was the father of nine and the grandfather of 14, a man who enjoyed fishing and collecting aluminum cans.

“It’s not real,” Godwin’s son Robert Godwin Jr. told local reporters. “(My father) was a good guy. He would give you the shirt off his back. Feels like my heart is gonna stop.” You can watch him talk about his father more in the clip below but be warned, it’s very, very sad.

The Problem With Father John Misty’s Takedown of Religion

Churches Really Pulled Out All the Stops for Their Easter Signs