During President Donald Trump’s Thursday night Town Hall debate, moderator Savannah Guthrie challenged Trump on his tweets, asking why, for example, he retweeted wild conspiracies alleging that Joe Biden had Seal Team 6 killed. Trump deferred by saying that “I do a lot of retweets” which is definitely true, but Guthrie pushed harder saying “You’re the president! You’re not someone’s crazy uncle where you just retweet whatever!” But her criticism must not have gone to heart, but on Friday morning, Trump retweeted a story from the Babylon Bee, a conservative, sometimes controversial Christian satire site.

The Bee joked that Twitter’s brief shutdown on Thursday was part of a plot to “slow the spread of negative Biden news.” By all appearances, Trump thought the story was straight facts. 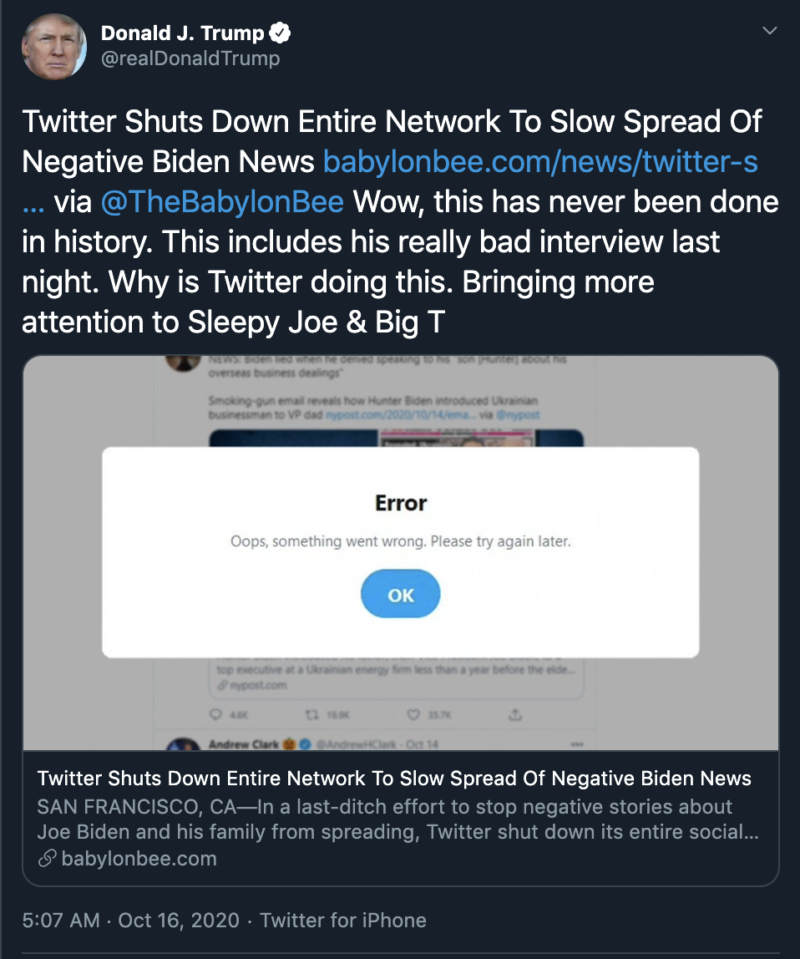 As of this writing, the tweet was still up, meaning either nobody on Trump’s staff is bothering to tell him what’s up or everyone knows and they’ve just decided the engagement is worth it. In any case, it’s been a good day for Babylon Bee traffic, as the site was trending on Twitter Friday morning. (Maybe a little too good — the site briefly crashed). The Bee even posting winking a new story: President Trump Declares The Babylon Bee His Most-Trusted News Source.

How to Love Truth in a Fake News World

How to Make the Most of the End of Summer

Not a Drill: Chipotle Is Offering Free Food to Vaccinated Customers Today

Operation Thou Shall Not Steal: Thieves Stole $740,000 in Tithes From Church Mailboxes Nationwide