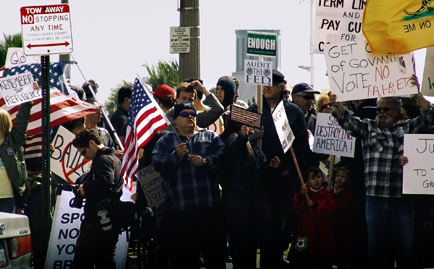 "Can’t we all just get along?"

That was the cry of Rodney King, the African-American man who was mercilessly beaten on March 3, 1991, by members of the Los Angeles police department. It became a rallying cry for the nation in the midst of hostile race wars. And it’s applicable today, as we find ourselves in very different—but no less contentious—culture wars.

The simple answer is, we are unique people with conflicting passions. But, shouldn’t it be different for followers of Jesus? Shouldn’t those of us who claim to follow the Prince of Peace be able to stand firmly upon our convictions without being offensive, cutting or downright mean?

Historically, there have always been pockets of Christians who give God a bad name—the Crusades, slavery, segregated America. While those are some of the most egregious examples, late-20th century Americans nurtured a new unChristian trend: incivility in public discourse.

Many Christians during this period noticed the widespread breakdown of morality in America and responded with organized political activism. A passion developed among America’s faithful, and with it came vicious public debates on hot-button issues like prayer in schools, the public display of the Ten Commandments, abortion and gay rights. As America polarized, public attacks became commonplace—even among Christians.

This struggle for control of our nation’s rudder—these “culture wars”—has hurt the public perception of Christianity. As recent Barna research shows, most non-believers feel “Christians are prideful and quick to find faults in others.” Today, 70 percent of non-Christians aged 16 to 29 say Christians are “insensitive to others.”

Such perceptions have triggered Christian thinkers from the right and left to wonder if this is the best practice for Christ-followers. Public engagement and personal passion over moral issues is laudable, but we should defend our deeply held convictions logically and lovingly instead of emotionally. We should temper our rhetoric with grace, humility and respect. We must learn to disagree without being disagreeable.

“Continuing the present course of the culture wars spells disaster for the United States and a historic failure to seize the moment and demonstrate to the world the significance of the American experiment,” writes Os Guinness in The Case for Civility.

On his God’s Politics blog, Jim Wallis posted “Rules for Christian Civility,” saying we should “not attack our fellow Christians as Democratic or Republican partisans, but rather expect and respect the practice of putting our faith first … even if we reach different conclusions.” Conservative columnist Peggy Noonan spoke out in her recent book, Patriotic Grace. “What we need most right now, at this moment, is a kind of patriotic grace,” she writes. “A grace that takes the long view, apprehends the moment we’re in, comes up with ways of dealing with it, and eschews the politically cheap and manipulative.”

Political incivility last year prompted Mark DeMoss to launch The Civility Project. DeMoss is the president of the largest Christian PR firm in America and has represented such conservative icons as Jerry Falwell, Franklin Graham and Charles Colson. “During the 2008 election, I began noticing some of the ugly things being said about people like Mitt Romney and Barack Obama, much of it by evangelicals,” DeMoss says.

DeMoss’ Civility Project asks people to pledge to be civil in public discourse and behavior, respect others whether or not they agree, and stand against incivility. “I think more people than we realize are clamoring for more respectful debate, especially on politics,” he says. “People are getting turned off to the entire system, Republicans and Democrats.”

DeMoss is careful to point out civility doesn’t mean unity. Americans will never agree on everything. Furthermore, civility doesn’t simply mean being nice. ”There are pragmatic and practical reasons for civility,” he says. “It is virtually impossible to have constructive dialogue or to inform and educate people in an uncivil environment."

Incivility is a cultural problem, and is not localized to the Christian community. From Kanye West’s infamous mic-snatching during Taylor Swift’s acceptance speech at the MTV Video Music Awards, to South Carolina Representative Joe Wilson shouting “you lie” at President Obama in the middle of his address to Congress, to Serena Williams’ expletive-laced rant after a line judge called a foot fault on her during the U.S. Open, it seems we’re no longer concerned about people’s feelings.

But Scripture says our attitudes should mirror Jesus’ as we put others above ourselves. Somehow, I just can’t imagine Jesus at a town hall meeting screaming His lungs out and comparing the president to Hitler.

Rather than getting dragged into the vicious spirit marking today’s public debates, Jesus would express the fruits of a greater Spirit: love, peace, patience, kindness, gentleness and self-control. Rather than letting opposing positions frustrate us, let’s see them as opportunities to live the virtues of our faith. Let’s infuse grace and humility into an uncivil world.