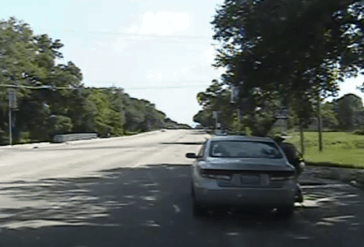 A dashcam video showing the arrest of Sandra Bland—who was found dead in her Texas jail cell three days later—has been released. The video (which contains some strong language) shows the 28-year-old being pulled over for a minor traffic violation. A confrontation between Bland and the officer quickly erupts after Bland refuses to put out her cigarette. Bland can then be heard attempting to call a lawyer or record the interaction on her cell phone as the officer demands she exit the car. When she repeatedly refuses—and asks why she has to get out of her vehicle—the officer becomes enraged yelling, “I’ll light you up!” pointing his Taser at Bland. Many of the details of what led to her arrest were not in the original arrest warrant. Authorities are now looking into whether the video had been edited before its release.

Bland can be heard repeatedly asking why she was being arrested by the officer. More of the confrontation happens off camera. In his report, the officer claimed she “started yanking away, then kicked me, so I took her straight to the ground.” In the clip, Bland can be heard shouting that the officer slammed her to ground. Three days after her arrest, Bland was found hanging in her jail cell. Though a medical examiner initially ruled her death a suicide, the local D.A. is now investigating it as a murder.

6 Friends Who Will Ruin Your Life