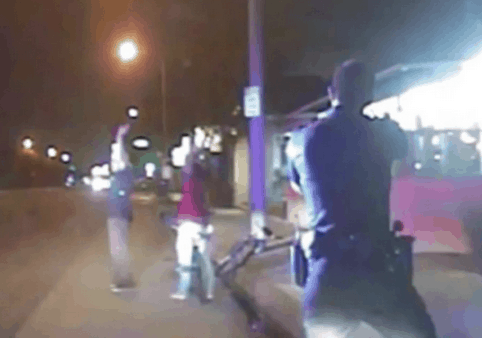 A judge in Gardena, California, has ordered the police department to release a dashcam video to the public. The video shows officers shooting at a group of unarmed men, killing one and injuring another in the 2013 incident. The police attempted to keep the video concealed. The disturbing video—which you can see here—shows officers yelling at three men to keep their hands up after police stopped them, mistakenly believing they had stolen bicycles. The men were, in fact, victims of a bicycle theft.

At no point do either of the men appear to be any threat to the multiple officers. In the video, as two of the men stand still with their hands up, one looks confused, paces forward and backward, lowering his hands to show the officers they are empty. When he raises them over his head again and removes his baseball hat, officers open fire. According to the Los Angeles Times, a lawyer for the city thought that by paying out a nearly $5 million settlement, the police department wouldn’t have to release the video. A judge disagreed, saying, “The fact that they spent the city’s money, presumably derived from taxes, only strengthens the public’s interest in seeing the videos.” None of the officers involved in the shooting were ever indicted.