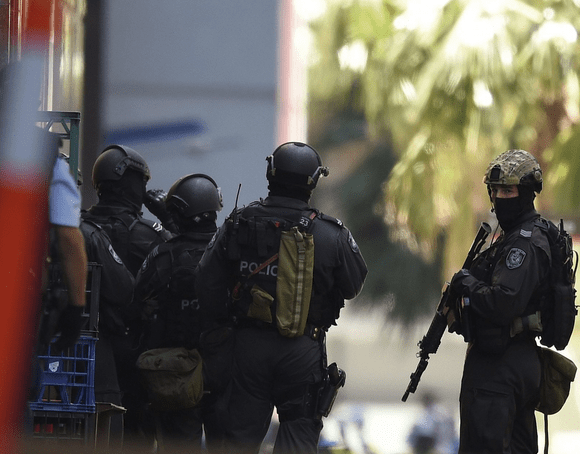 A gunman is currently holding an unknown number of hostages at a café in Sydney, Australia, hours after seizing the business in one of the city’s busiest areas. At least five of the hostages managed to escape. Though all of his exact motivations are not clear, the gunman has reportedly demanded an ISIS flag, and early into the seize, forced hostages to hold a different flag that read “There is no God but God and Mohammed is the prophet of God” in Arabic. The gunman has reportedly released a video, demanding to speak with Australian Prime Minister Tony Abbott on the phone, and also claiming to have planted bombs around the city. Australia is one of several nations taking part in a coalition fighting the spread of the Islamic militant group known as the Islamic State in Iraq and Syria. Prime Minister Tony Abbott issued a statement telling residents, “Our thoughts and prayers must above all go out to the individuals who are caught up in this,” but also urging them to continue their day-to-day lives as normal, as police work to free the remaining hostages …

[Update] Police have identified the gunman as Haron Monis, a 49-year-old man who has, in the past, been charged with being an accessory to his ex-wife’s murder.

[Update 2] Details are still coming in, but a video on the ground shows that police in Sydney have stormed a café were a gunman had taken numerous hostages. Early reports say at least one person has been shot.

[Update 3] Police have confirmed that the siege is over, but we are still waiting on confirmation for casualties.

Invisible Children’s U.S. Office Will Close by the End of 2015