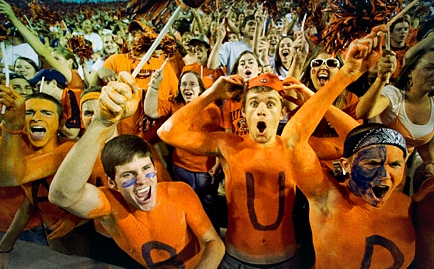 I don’t want to write this. Not today. Not when the Auburn Tigers, my Auburn Tigers, are only hours away from playing the most important football game in the history of space and time. I would have rather have written this in May, when the stresses of being a rabid college football fan are more manageable. No, today I have worrying to do, and I’d rather not have to sit down and question whether stressing over spectator sports is something a Christian should be doing.

It’s been an interesting fall to live in Auburn, and by interesting of course I mean totally awesome. You see, my wife and I are Auburn graduates, and if you haven’t heard, our football team is pretty good. So good, in fact, that tonight they are playing the Oregon Ducks for the BCS National Championship. What’s made the fall more interesting, and now by interesting I mean slightly awkward, is that in August my first book came out, entitled God and Football: Faith and Fanaticism in the SEC. In the book, I traveled to the 12 schools of the Southeastern Conference, searching for a healthier perspective on sports.

I spent the fall speaking to churches, campus ministries, civic groups and quarterback clubs about correctly prioritizing your love of God over your love for football. And coming off last season, and the lessons I learned from writing my book, I figured I actually would have a healthier perspective on sports.

But like I said, our football team is ridiculously good this year, and I may have gotten a little caught up in the excitement.

So here’s the question,: Is it OK for Christians to care about sports? Can you even answer a question like that? I searched BibleGateway.com and Scripture appears to remain silent on the subject of football, although Leviticus has some harsh words about pigskin. But I guess just because the Bible doesn’t mention something doesn’t mean we’re clear to partake in it (e.g. pornography, dog-fighting, Bieber Fever).

This is the problem I ran into repeatedly while writing my book. I don’t believe there is a one-size-fits-all answer to questions like this. It may just be one of those things you have to figure out through prayer and personal conviction, but let me ask it another way.

Do you think one day we will be held accountable for every dime we spent on sports, and every minute we spent watching sports? If you are not aware, there are some terrible things going on in the world—oppression, starvation, slavery—the sorts of things we as Christians are supposed to be standing up against. How many times have you heard that nearly half the world’s population lives on less than $2 a day? That’s $730 a year ($732 on Leap Year). Or to put it into perspective, about $500 less than I spent on season tickets this season.

Will I get a pass on this at Judgment Day? Will Jesus say, “You spent more money on football tickets than 3 billion of my children lived on in one year, but I understand, those games sure were exciting, well done, my good and faithful servant.”

Of course you can get as legalistic with this as you want. I spent just as much on the cable and Internet bill as I did on football tickets. Is it OK for a Christian to have cable when children are starving in Africa? Is it OK to belong to a gym when that money could serve a higher purpose? “But my body is a temple,” you protest. Maybe, but jogging and pushups are free, and your body isn’t that great.

Perhaps it’s a question of comfort. If you have disposable income to spend on sporting events, maybe your life has become too comfortable. I think that might be the thinking behind books like Francis Chan’s Crazy Love and David Platt’s Radical, but I’ve avoided reading them both because that is not a message I particularly want to hear. I mean, when Jesus told that guy to sell all his possessions and give the money to the poor, that was a one-time suggestion to a single individual, right? Is the ability to spend what amounts to a year’s wages for half the world on our hobbies something we should be thankful for, or something we shouldn’t be doing?

Like I said, I didn’t really want to write this article. Not today. But the questions are out there, and worth thinking about. And I’d certainly appreciate your thoughts on the subject. As for me, I’m going to try and forget about all this stuff so I can enjoy the game in peace. At least until tomorrow.

Chad Gibbs is a rabid Auburn fan and author of God and Football: Faith and Fanaticism in the SEC (Zondervan, 2010). He and his wife live in Auburn, Alabama with their dogs Harper and Bob Vance. He also writes regularly at ChadGibbs.com.

Rebuilding the Church in Haiti