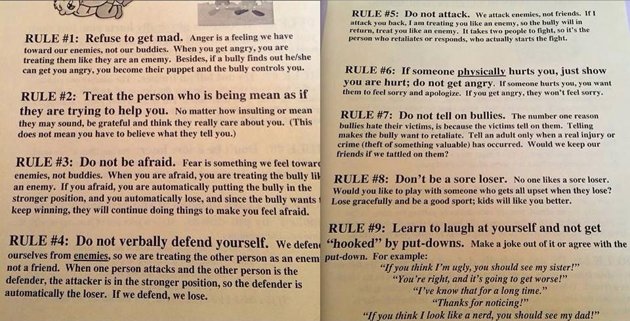 A school in Lincoln, Neb. is under fire after sending fifth graders home with a pamphlet for how to deal with bullies. It was obviously well-intentioned, but it’d be difficult to dream up worse advice. For example:

Treat the person who is being mean as if he is trying to help you: No matter how insulting or mean they may sound, be grateful and think they really care about you.

Do not verbally defend yourself.

Do not tell on bullies: The number one reason bullies hate their victims, is because the victims tell on them. Telling makes the bully want to retaliate. Tell an adult only when a real injury or crime (theft of something valuable) has occurred. Would we keep our friends if we tattled on them?

Learn to laugh at yourself and not get hooked by put-downs: Make a joke out of it or agree with the put-down. For example: “If you think I’m ugly, you should see my sister!”

Yikes. The school has apologized for the flyer, but parents are asking for more—including the job termination for whoever wrote the flyer and an explanation to children that the “rules” were out of line. Hopefully, the school remembers to not verbally defend themselves …

Update: It appears the flyer was written using the teachings of one Izzy Kalman (and not, as some outlets are reporting, youth motivational speaker Brook Gibbs) a school psychologist who told The Lincoln Journal Star that “It’s impossible to understand what I teach based on that flier. It’s bare-bones, it’s a skeleton. The intentions were good but it’s not the proper way to present what I teach.”

Hippos VS. Crocodiles: Our Worlds at War